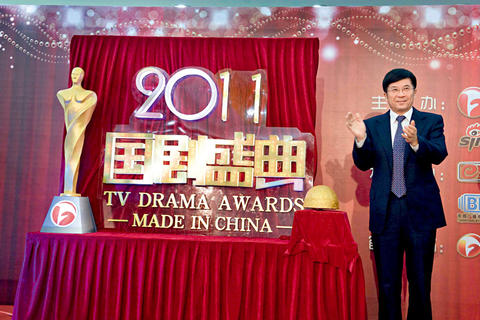 (Beijing) – A regional television station that once burned the airwaves with hot TV dramas and high ad revenues is in the spotlight again now that its top executives have been charged with corruption.

Graft inquiries have been rocking Anhui TV, a satellite TV service of central Anhui Province, since last September, when the station's advertising head Wang Maosheng was detained by Communist Party authorities. Since then, six other senior or former station executives have been arrested for alleged corruption, including former station chief Zhang Suzhou and former deputy chief Wu Tao.

Most recently detained was deputy station chief Zhao Hongmei. She's been held since early February on bribery charges leveled by provincial prosecutors. Sources close to the situation said Zhao was taken away during a television industry meeting in Hefei, the provincial capital, on February 9.

Fifty-five-year-old Anhui TV is one of the oldest provincial TV stations in China. And its been one of the most successful since 1996, when the station started outperforming counterparts in other provinces in terms of advertising revenue and viewership. The station switched to satellite-only transmission in 1997, and attracted more viewers that year than any other provincial station.

Another milestone was reached in 2000, when Anhui TV lured more viewers and advertisers by rolling out new weekend programming that included several popular series. Anhui TV reported a total viewership of 1 billion in 2000, more than any other among provincial station, and 2.2 billion yuan in advertising revenue, up 30 percent from the previous year. Anhui TV's revenue figures continued to lead the provincial station pack as recently as 2008.

Today, Anhui TV still makes money. But a station manager who asked not to be named said annual revenues have barely changed since 2008, while revenues at other provincial stations have soared to 10 billion yuan or more.

Anhui TV's popularity has also waned relative to its rivals. The station is now ranked 10th among provincial channels in terms of viewers. And the unfolding graft investigations may throw even more cold water on the once-hot station.

The man leading Anhui TV from its heyday and through the slowdown years was the now-detained station chief Zhang, 61. He joined the station in 2006. And from 2010 until stepping down last summer shortly before being detained, he had served as party secretary, director and chief editor.

Zhang was officially named October 30 as the target of an investigation by the Communist Party's graft buster, the Central Commission for Discipline Inspection. Four months later, he was detained and charged with bribery.

Zhang was the second provincial TV station chief taken down by the party's anti-corruption campaign since 2012. The first was Shi Wenlian, former head of Liaoning TV in northern China, who last July was sentenced to life in prison after being convicted of taking bribes in advertising and TV drama purchase deals.

Sources at the station who asked not to be named say Zhang was responsible for many, major changes during his tenure affecting hiring decisions as well as TV program purchasing and advertising operations.

But in effect, said one source, Zhang's moves concentrated power in his own hands. He implemented the changes without setting up a mechanism for supervising the transition, the source said, and in the process hurt employee morale.

One Anhui media industry expert described Zhang as a bureaucrat who joined the TV station even though he had no professional experience. In fact, the expert said, Zhang mainly used the TV station as a propaganda tool.

Several years ago "Anhui TV missed its best opportunity" to maintain growth, said a station manager. And although Zhang "cannot take all of the blame" for the station's slowdown in recent years "he played a big role," the manager said.

Questions also have been raised about Zhang's personnel decisions, such as the demotion of Wang Xuefeng. Wang, seen as a capable young executive, was demoted from his post as a deputy director about a year before quitting in 2011. He was replaced by the now-detained Zhao.

A former Anhui TV executive said after Zhang took office "the environment inside the station totally changed." What had been a dynamic work environment, marked by competitive content production operations and sound personnel management, soured during Zhang's tenure.

"From mid-level managers to deputy directors, everyone submitted to Zhang," the source said. Staffers were to "only obey his orders."

Neither was Zhang self-sparing. His office filled an entire floor of a new, 3 billion yuan office building that opened in 2013, according to a source. His workspace included a kitchen and a private chef.

Zhang once bragged that Anhui TV was one of China's most affluent provincial TV stations with more workspace than any rival. But that bragging may have helped deflect attention from illegal activities connected to the office building construction project.

Sources told Caixin that prosecutors are looking into whether corruption played a role in the project. And although details of the charges against Zhang have not been released, his involvement in the project may give prosecutors ammunition needed for a conviction.

Sources close to the Anhui TV investigation said the probe of Wang, who headed the advertising office before being detained in September, led them to Zhang.

A source close to the prosecutor said that while being interrogated by authorities, Wang claimed Zhao and Wu had also broken the law.

Wang was tried in February by a Hefei court. He was accused of accepting bribes totaling 190,000 yuan from advertising agents. A decision has yet to be announced.

On March 25, the Anhui prosecutor said Zhao had been detained for allegedly accepting bribes in exchange for favors tied to Anhui TV's advertising, drama shows and apparel purchasing. A source close to the investigation said it's thought that about 80 people gave bribes to Zhao.

Investigators then went after Wu, who also served as a board member for the private filmmaker Zhejiang Huace Film and Television Ltd. On March 17, Zhejiang Huace said Wu was helping officials with their investigation.

Wu set up Anhui TV's advertising subsidiary Jinjuan Advertising Co. in 1992, paving the way for Anhui TV's years-long surge in advertising revenue. He left in 2003 for a job as a TV drama consultant and producer with Shanghai Croton Media Co.

Sources close to the investigation said Wu has been targeted for alleged business links between Shanghai Croton and Anhui TV, which was the former's biggest client between 2011 and 2013.

Over several years, the station's records show, about 10 percent of the money spent by the station on TV dramas went to Shanghai Croton.

Zhejiang Huace took over Shanghai Croton in 2013 and then signed a deal with Anhui TV to provide 200 TV series episodes every year. A source close to the Anhui prosecutor said investigators want to know whether Wu held stakes in Shanghai Croton on behalf of Zhang or other Anhui TV executives.

Sources close to the investigation said Cheng is suspected of taking bribes in apparel purchases and other deals while Song has been targeted for corruption linked to station construction projects.

Xiao stands accused of taking 2 million yuan worth of bribes in exchange for TV drama purchases, said one source.