China Fleshing Out AIIB for Asia and the World 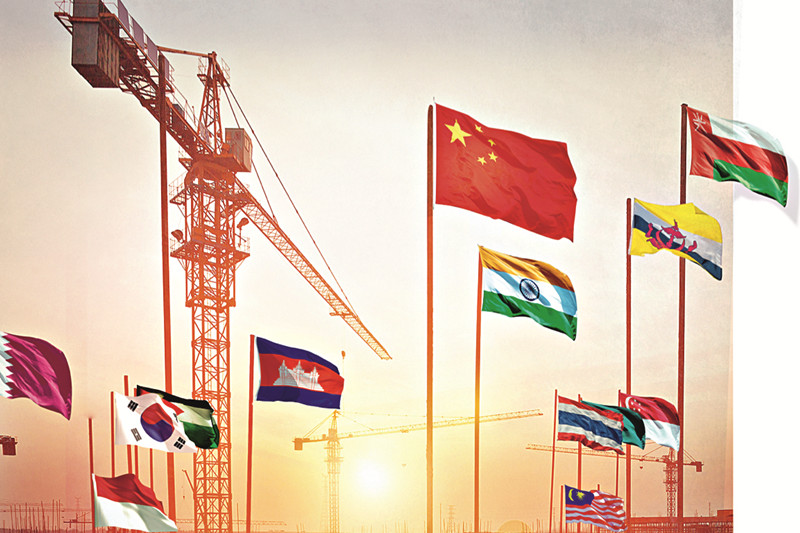 (Beijing) – Fifty-seven nations have signed up for the new financial powerhouse called the Asian Infrastructure Investment Bank (AIIB) that was initiated by the Chinese government and will be headquartered in Beijing.

More details about the AIIB are to emerge after the Chinese government stopped accepting prospective founding member-nation applications on March 31 and started fleshing out plans for the bank's structure, management and operations.

Chinese officials say the AIIB will have a three-level operational structure with an executive council headed by a bank president in charge of proposing key decisions; a board of directors to review and approve, modify or reject executive decisions; and a management team tasked with executing decisions.

It's unclear how member-nations might be represented on the board, although the final arrangement might reflect an idea posed four years ago by the minister of finance, Lou Jiwei, who said during the AIIB's early phase that a "non-resident board of directors" could be formed for discussing major issues.

The AIIB's decision-makers are to reflect the good practices of existing multilateral institutions in terms of environmental policy, governance structure and loan applicant assessments, Lou said in 2011. But the new bank is also supposed to go a step further by improving on these practices, cutting costs and raising efficiency levels, he said.

Also in the works is the bank's charter, which would spell out its mission, purpose and goals. As of late April, negotiations over the charter's content between founding members were underway, said sources close to the situation.

Founding members were expected to finalize the charter's content and sign the finished document by the first half of this year.

Another task at hand revolves around building a bank staff. Sources close to the organizational process now underway – a process that a Chinese government source said would lead to the AIIB's formal launch by the end of 2015 – said the bank will recruit employees from around the world, including non-member countries.

Although the AIIB is the first such institution initiated by the Chinese government, several sources close to Chinese policymakers said Beijing authorities have been mulling whether to form a multilateral bank for more than 10 years.

The bank's march to launch began March 31 – the same day member-nation applications closed – at a conference in Almaty, Kazakhstan. Attending were officials from 29 founding members at that time. They discussed the AIIB's governance structure and procurement issues, according to the Ministry of Finance.

A government official close to the preparations and who asked to remain anonymous said the start-up process is on track. "The major principles have been set and will not be changed," the official said.

Plenty of work lies ahead. Long before bank doors open organizers will have to hire employees. They'll also have to face up to challenges, including doubts about China's intentions that stem from the government's role as the bank's initiator, organizer and host.

"Never underestimate the challenges facing the AIIB," said one financial expert who asked not to be named.

The bank's hiring practices could go a long way toward defusing concerns about the government's influence in the bank's operations.

Johannes F. Linn, a senior resident scholar at the Washington-based non-profit group Emerging Markets Forum, said the AIIB should be run by professional employees hired on the basis of merit, not citizenship or political affiliation.

A financial expert at the World Bank-affiliated International Finance Corp., which focuses on private sector development, said institutions such as the AIIB should employ teams of professionals in areas such as economics, law, engineering and finance. The expert asked not to be named.

The AIIB's staffing challenges are actually no different than those faced by similar banks, Wihtol said. "The real challenge for all international financial institutions," he said, "is to ensure that efficiency does not compromise efforts to maintain high standards for due diligence and implementation."

In fact, the idea of forming the AIIB rose against the backdrop of international criticism over inefficiencies and bureaucratic waste at existing institutions, including the 188 member-nation World Bank and 67-member ADB. These institutions have also borne the brunt of critics who say not enough has been done to financially support projects in emerging-market countries.

In April, a former U.S. Treasury secretary, Lawrence Summers, said some of the AIIB's popularity can be traced to the fact that the U.S. Congress did not approve a plan posed in 2010 by the executive board designed to give emerging-market countries more power in governing the International Monetary Fund (IMF).

Under the plan, China's voting share would have increased to 6.39 percent from the current 3.72 percent to make it the third-most influential member-country in the IMF behind the United States and Japan. India's ranking would have risen to eighth from 11th, and Brazil would have moved up four spots to 10th.

Having survived what some considered a snub by United States during the AIIB member recruitment period, the Beijing government is pushing forward with the bank to prove that China is a rising power and that it can lead a multilateral organization based on international standards of governance.

Still, international finance experts say the AIIB need not reinvent the wheel. Instead, the institution's builders can draw on lessons learned in the past by older institutions. So from the start, the new bank can adopt mechanisms that guarantee market-oriented operations, fair and transparent personnel management, balanced spending, and effective project supervision.

To that end, Linn thinks the bank should build partnerships with borrowing countries and other multilateral institutions; support infrastructure building and effective operations and maintenance of completed projects; and make sure recipient countries are not overburdened by debt.

In the years leading up to the AIIB, China built bilateral partnerships for infrastructure projects in emerging-market countries, such as the nine-year-old China-Africa Development Fund. More than half of the 89.3 billion yuan in overseas development funds spent by the government between 2010 and 2012 was in the form of policy bank loans.

This bilateral approach, however, triggered disputes between many recipient countries and China. The friction was tied to problems with project operations, environmental protection and social issues, for example.

These problems point to "one reason that China is attracted to a multilateral approach, namely by starting the new Asian Infrastructure Investment Bank," said David Dollar, a researcher at the John L. Thornton China Center at the Brookings Institution think tank in Washington. "On the other hand, (China's bilateral approach) track record makes some countries, like the U.S., nervous about how the new bank will operate."

The United States and Japan are the only major world powers that have so far declined to seek membership in AIIB.

Kenneth Lieberthal, a Brookings Institution senior fellow, said the U.S. is concerned about AIIB's operational standards and approach toward governance.

Wang Jisi, who serves as director of Peking University's Institute of International and Strategic Studies, said the U.S. government is concerned about the AIIB's transparency and geopolitical strategy. Washington wonders whether China is seeking to replace the United States' leading position in Asia, he said.

But the AIIB also has friends in Washington, including Jeffrey J. Schott, a senior researcher at the Peterson Institute for International Economics. He said that he and many of his colleagues think the United States should join the China-led bank.

Lew's statement reflected what some said was a softening of the U.S. position. Dollar said the secretary's comments would ease China-U.S. tension over the AIIB. But his words also implied that, at least for the short-term, the U.S. government plans to keep its distance.

Chinese and Japanese officials held talks that focused on the formation of the AIIB in early 2014, Japanese media reported. The Japanese government redoubled its attention later in the year after European countries started showing interest, a Japanese diplomat who asked not to be named told Caixin. Britain said on March 12 that it would be apply to a founding member, followed by Germany, France and Italy on March 17.

"Japan's concern may be deeper than the U.S.' concern," said Wang. "But it's not necessary for economic issues to be overridden by political and security concerns."

Of the 57 countries that signed up as AIIB founding members, four are permanent members of the UN Security Council. Another 14 are among the 28 European Union nations, and 21 belong to the 34-member Organization for Economic Cooperation and Development.

Overseas enthusiasm for the AIIB last year surprised some Chinese officials such as Jin Liqun, secretary-general of the AIIB's Multilateral Interim Secretariat. In March, he told a forum in Beijing that he expected at least 35 founding members. He got more than expected.

A source close to the AIIB preparation process said even after the deadline for founding member applications passed, China was receiving requests for permission to participate from more countries.

An incentive for ground-floor membership was that founding members have the right to help write the bank's charter. Any countries joining later are slated to have less rule-making power.

Britain apparently wanted to join early for business reasons. Kerry Brown, director of the China Studies Center at the University of Sydney, said Britain ignored U.S. pleas to stay off the bank's membership rolls partly because London wants to maintain its status as a hub for overseas yuan trading and provide financing for Chinese enterprises.

Beijing is also attracting overseas support by tapping experts from the World Bank, the ADB and other organizations for help during the organizational process, according to sources close to the AIIB. The secretariat headed by Jin invited experts from around the world. And in March, environmental policies and governance issues were discussed at a meeting in Beijing attended by representatives from the founding member-countries, the World Bank, the ADB and other groups.

In Dollar's view, "China has managed the development of AIIB very well so far. It has consulted (others) widely on issues such as the bank's governance structure, environmental and social safeguards, and procurement policy.

"I expect the bank to have standards similar to other banks," he said. "But, hopefully, the new bank can find ways to be more efficient" than existing institutions which "are not perfect."

It's expected the AIIB will emerge as a major force for financing the infrastructure – such as roads and bridges – that experts say is badly needed in much of emerging Asia.

The French embassy in China responded to questions about AIIB posed by Caixin by saying that the bank's formation is important for Asia due to the region's huge demand for infrastructure project financing – demand that's currently beyond the limits of existing multilateral institutions.

Frequently cited ADB data says that roughly US$ 8 trillion of investment would be needed in the Asia-Pacific region by 2020 – a level of financing too high for existing institutions to reach. In fact, the bank said, existing banks can only meet 5 percent of that demand.

The AIIB is not about overtaking existing institutions but leveraging private capital to meet global infrastructure investment demands, said Kevin Rudd, a former prime minister of Australia. His country joined the AIIB on March 29.

Yet even founding members are not free of concerns. In an emailed statement replying to a request for comments, Australia's Department of the Treasury said it does not want the AIIB to be controlled by any single country, and the board of directors must have the right to make major investment decisions.

Based on the gross domestic product of AIIB member-countries, the bank's Asian members are likely to hold as much as a three-quarters stake in AIIB. But an official close to the bank said non-Asian countries may want more.

Said Dollar: "I think so many Asian developing countries signed up quickly because they found it difficult to implement infrastructure projects with the existing banks."

Also of keen interest is the bank's presidency. Considering that China took the lead in establishing the AIIB, Wihtol said, it's reasonable to expect China to appoint the president.

Presidential appointments by the World Bank, IMF and ADB have triggered a lot of debate. Experts said they hope AIIB's appointment process can be more open.