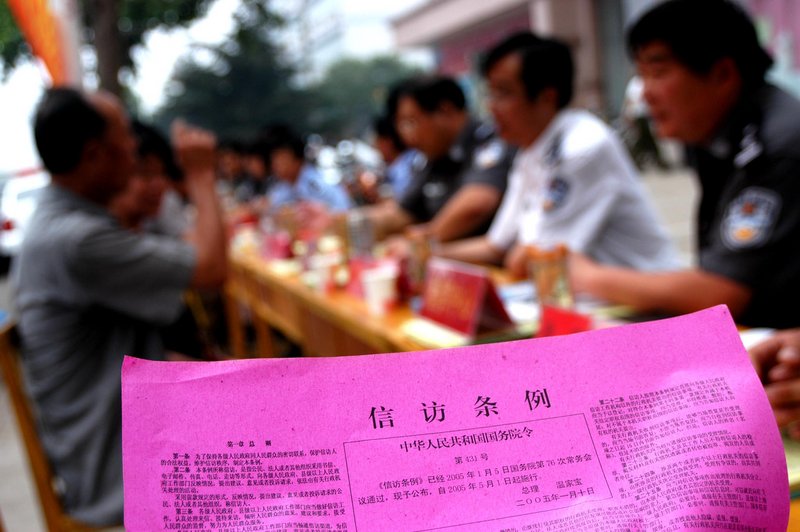 Officials promote a State Council regulation on petitioning at an awareness campaign in Rizhao, Shandong Province in July 2005

(Beijing) – A central government agency that handles complaints from members of the public has gotten the cabinet's approval to study the feasibility of enacting a law on petitions, an official says.

Zhang Enxi, the vice director of State Bureau for Letters and Calls – the government's complaints department – told the official gov.cn website on May 13 that the study would be based on lessons learned from enforcing the 10-year old State Council regulation on public petitions.

The study would be in accordance with a recent commitment the Communist Party has made to establishing the rule of law in China and to protecting the legal rights of petitioners, he said.

Zhang said that legislators and top government advisors and academics have called for a law governing the filing of petitions especially in response to a number of problems that have cropped up in recent years.

Many people who have complaints regarding their local officials or courts head to the capital to hand petitions to the central government to seek justice. Many of these gripes involve villagers losing land to officials who are keen to sell it to developers.

This petitioning has been seen in China since imperial times, when individuals from around the empire headed to the capital hoping the emperor or a fair official would correct abuses in their far-flung village.

In modern times, local officials have put a wrinkle in the petition tradition: "black jails," namely cheap hotels or empty office buildings where thugs hired by local officials detain individuals airing complaints. The lower officials resort to these detentions mainly because they worry their career prospects will be hurt if superiors find out that all-important "social stability" is not being maintained in their jurisdiction.

Many people who have been held in these jails complain of abuses at the hands of the thugs, such as being deprived of food and water or beaten until they agree to end their petitioning ways.

Zhang said the State Council's regulation on petitions is flawed and the pursuit of stability in society should not come at the expense of petitioners and their rights.

Peking University law professor Zhang Qianfan said that a law on filing grievances with the government should better protect the rights of individuals, but the petition system has only limited ability to solve China's social ills.

"The problems lie with the local governments, where there's no oversight of local officials," he said. "As a result, people are forced to seek justice through costly petitions.

"Even if petitioners are all allowed to come to Beijing, the central government can't help solve all their problems."