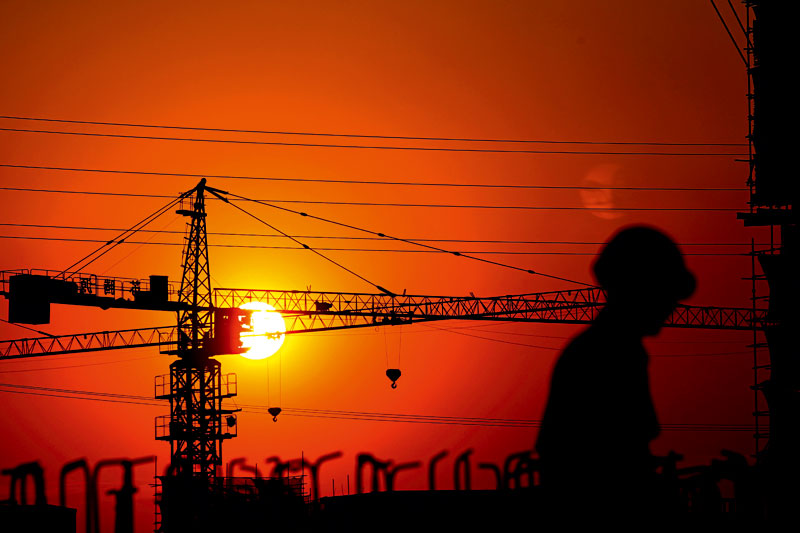 (Beijing) – China has set in motion a program that lets local governments cut debt costs by swapping up to 1 trillion yuan worth of high-interest loans for low-interest bonds this year.

A May 8 notice issued by the Ministry of Finance, People's Bank of China (PBOC) and China Banking Regulatory Commission gave the program a green light while spelling out requirements for buyers and sellers.

It says local governments could negotiate directly with their creditors to exchange some of their existing debt into bonds, in addition to selling bonds publicly in the interbank market and use the proceeds to repay loans.

In the case of direct exchanges, every new bond's interest rate must be no less than equal to the previous five days' average yield on bonds issued by the central government. The notice also said the rate's high end must be no more than 30 percent above that five-day average.

Joint-stock investment bank China International Capital Corp. (CICC) estimated that 600 billion yuan to 700 billion yuan worth of existing debt that needs to be repaid this year would likely be swapped for bonds with original creditors through private negotiations, and the rest sold publicly.

Local governments are likely saddled with more than 18 trillion yuan worth of debt, according to the most recent official audit data issued in June 2013. Some 1.86 trillion yuan of that is expected to come due this year.

Much of that debt was racked up after the central government ordered local government stimulus spending on infrastructure projects to offset the 2008 financial crisis. The biggest creditors have been state banks, securities firms, trusts and insurance companies.

Wasting no time after Beijing issued the May 8 notice was the coastal province of Jiangsu, which that same day became the first local government to participate in the program. The provincial government sold 52.2 billion yuan worth of bonds publicly to institutional investors on behalf of several cities and counties.

According to the Jiangsu prospectus, bonds from the issue worth 30.8 billion yuan were to be used to pay off existing debt, while the rest of the funds raised were to finance new infrastructure projects.

The provincial government said the yields ranged from 2.94 percent on three-year notes to 3.41 percent on 10-year paper. All of them exceeded those on central government bonds of the same maturity by only 2 basis points.

CICC acknowledged that using low-rate bonds to pay off existing, high-interest debt would mean lower yields for banks and other local government creditors. On the other hand, the report said, bonds backed directly by the credit of provincial governments are safer than loans through companies connected with lower-level governments. Moreover, bonds can be sold to other investors or used by banks as collateral for liquidity from PBOC, the nation's central bank, commonly issued through key lending facilities.

"The ultimate purpose of the swap is to make local government debt what it really is – a low-risk, low-yield, normal interest rate investment product, rather than a freak that has low risk but high yields because of local government guarantees," a source close to the central bank said.

In addition to reducing costs for local governments, analysts say, the debt-swap project is likely to benefit the Chinese economy as a whole.

One benefit, analysts say, stems from the fact that using bonds to directly replace debt held by existing creditors will have less of an impact on market liquidity than if they're sold to the public. An entirely public bond-sale project, they say, would force the central bank to increase money supply in order to reduce bond market capital costs, and then require additional central bank measures to mop up excess liquidity.

"The swap is essentially a debt restructuring – replacing loans with bonds in a closed environment," a source close to the central bank and the finance ministry said. "In theory, it means that there is no need for extra capital, and no impact at the macro level."

Bankers contacted by Caixin expressed mixed feelings toward the new bonds. Some welcomed the program for raising the bar on debt guarantees, since every bond will have a provincial government's backing – a notch higher than the lower-level government support on existing loans. But other bankers complained that bond yields were too low.

One banker working at a Jiangsu branch of Industrial and Commercial Bank of China said he was relieved to learn that by buying the bonds his bank could clear the books of existing and sometimes worrisome loans to local government financing platforms.

"It's like getting rid of a burden," the banker said. "The borrowers have changed, with provincial governments replacing lower-grade financing platforms. So the debt has a higher credit rating and less risk."

Less enthusiastic bankers noted that the expected, annual returns on these bonds would only be in the 4 to 5 percent range. That's far below the 7 to 8 percent in interest on existing loans to local government financing platforms.

Deng Haiqing, director of fixed-income research at CITIC Securities, said the yields of Jiangsu government's bonds were too low to reflect their risk, considering that local governments are more likely than the central government to default on bonds. He added, however, that he expects local government bond yields to climb as the market matures.

For now, though, one banker said he's not ready to buy the bonds. "Cost-wise," he said, "it's just not worth it." And so far, the banker said he is not convinced that the central bank can strengthen any bond's value by accepting it as collateral for a liquidity-related loan.

"Banks currently do not lack assets that could be used as collateral," the banker said. "They all have bonds issued by the central government, the policy banks and China Railway Corp., all of which are more liquid than local government bonds."