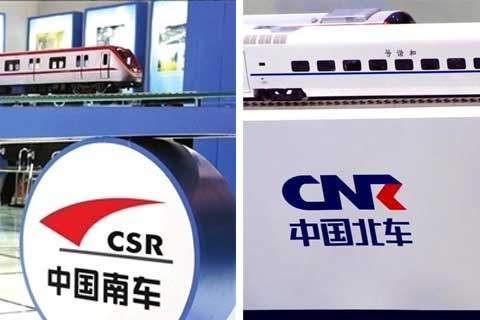 (Beijing) – A new company that has been formed by the merger of the country's two largest railroad equipment manufacturers was registered with the government on June 1, a statement from one of the firms involved said.

CSR and CNR Corp. Ltd. said on December 30 that the latter will be incorporated into CSR in the merger, and that CSR would issue shares to replace the CNR stock held by investors on both the Shanghai and Hong Kong bourses. CNR was to withdraw all of its shares from those stock markets.

The June 1 statement said CSR has finished replacing the shares. The new company's leadership consists of five executives from CSR and five from CNR.

Cui, 61, and Zheng, 60, were deputy general managers of the former China National Railway Locomotive & Rolling Stock Industry Corp. from October 1999 to September 2000 before that company was split into CSR and CNR in 2000.

Cui worked at CNR after the separation, and Zheng worked for CSR.

The personnel arrangement would help the merger go smoothly, a person with knowledge of the matter said. The headquarters of the new company will be in the capital's Haidian District, the source said.

The merger is an experiment by the government aimed at reforming state-backed firms, an official from the State-owned Assets Supervision and Administration Commission said.

Since 2009, China has built more than 10,000 kilometers of high-speed railroad lines, the most in the world, and now the government wants the rail equipment companies to sell bullet trains overseas. Chinese companies have not won any foreign contracts to export a bullet train so far.

The central government said last year it wanted CNR and CSR to merge to create a more competitive player abroad.