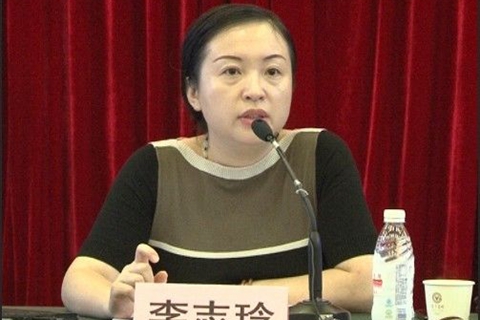 (Beijing) – An official in charge of reviewing the refinancing requests of listed enterprises has been placed under investigation on allegations of graft, China Securities Regulatory Commission (CSRC) said on June 20.

Li Zhiling, head of a bureau which oversees share issuances by companies listed on the Shenzhen and Shanghai stock exchanges, was fired for failing to comply with an internal regulation that bars her husband from trading stocks, CSRC said.

The regulator did not say who her husband is. It prohibits all CSRC employees and their close family members from making stock investments to avoid conflict of interest.

The CSRC also said it handed over Li's case to the police on claims that she abused her position as a regulatory official. The CSRC did not elaborate further on the case.

Since April 2014, Li had been in charge of the financial and legal reviews of listed firms' requests for selling additional shares, a position that is considered powerful.

Sources close to the situation said the Communist Party's Central Commission for Discipline Inspection (CCDI) started investigating Li and her husband more than a year ago and had talked to her several times. But none of the conversations seemed to have led to any negative impact on her job. Li was last seen in the office on Friday, June 19.

A source close to the regulator said many people in the CSRC knew that the CCDI put a probe over Li, but did not expect the investigation to involve her husband's activities.