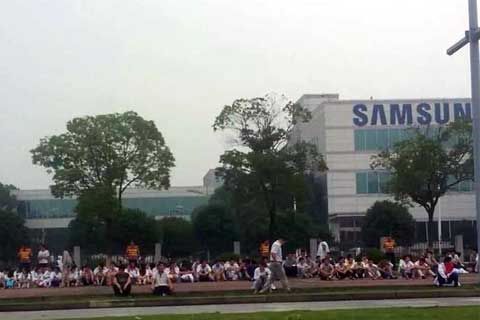 More than 100 people who worked at Bokwang Co.'s factory gather outside one of Samsung's subsidiaries in Suzhou on June 25

(Beijing) – Employees of a factory owned by Bokwang Co., which makes parts for Samsung Electronics Co., agreed to a plan that provides them with compensation for getting laid off, a representative of the workers says.

Labor officials collected money owed by two subsidiaries of the South Korean electronics giant in the eastern city of Suzhou to provide the compensation, the person said. The payouts will be based on workers' years of service at the factory.

On June 24, the factory gave its employees 11 days off, saying it had no new orders.

The factory's parent company BKE&T Co. Ltd., a high-tech subsidiary of Bokwang, declared bankruptcy just before the Dragon Boat Festival on June 20, the head of the factory's union said.

More than 100 workers gathered at the factory on June 25 to ask for compensation plans, and they later went to the offices of one of Samsung's subsidiaries in Suzhou to protest.

The factory makes displays and video cards for Samsung's televisions and electronic devices.

The labor bureau of the Wujiang industrial park where the factory is located presented the factory workers with a compensation plan on July 3, and they agreed to it.

The factory has seen orders from Samsung decline since March, workers said. Only four production lines were running in June, down from 24 lines last year. The factory had 600 workers last month, but more than 1,000 in 2014.

Samsung's financial reports indicate business is slowing. Its US$ 6.13 billion in profits in the second quarter of this year was 4 percent less than in the same period last year. Also, the market research group IDC said Samsung sold 9.3 million mobile phones in China in the first quarter of this year, down from 20.5 million in the same period of 2014.

Samsung said the factory closure had nothing to do with the company and that it produced up to 90 percent of its own parts and products.