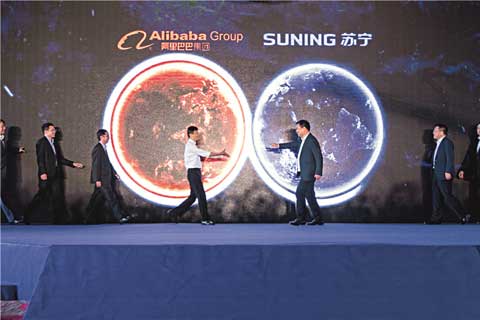 (Beijing) – JD.com Inc. and Alibaba Group Holding Ltd., China's top two e-commerce companies, are gearing up to expand their business beyond the Internet by signing partnership deals with offline retailers, a move analysts say is indicative of broader changes in the sector.

Business reshuffles have accelerated in both the e-commerce and offline retail sector in the past few years. Internet companies like Alibaba, JD.com and Tencent Holdings Ltd. have been busy acquiring online assets to expand their business scope. Meanwhile, offline retailers have sought to develop their own online platforms in a bid to improve their competitiveness. But now, companies that have in the past been competitors are seeing each other as partners.

Many market insiders speculated that Suning would join hands with Internet search giant Baidu Inc., but then Alibaba held a press conference announcing the deal. Alibaba's offer valued Suning at 141.5 billion yuan, a premium of about 40 percent on company's market cap on the Shenzhen bourse. The deal helped Suning's share price surge for four straight days.

"The cross-shareholding arrangement shows more sincerity (by Alibaba) than a direct investment," one person close to the transaction said.

Zhang Jindong, the chairman of Suning, said that the negotiations took only two months and he made his decision after only two meetings with Jack Ma, Alibaba's chairman.

This is not the first time Alibaba has partnered with an offline retailer. In March 2014, it spent HK$ 5.37 billion for a 9.9 percent stake and convertible bonds in China Yintai Group, which runs department stores. As of July this year, Alibaba has increased its stake in Yintai to 32 percent, becoming its largest shareholder.

Business integration between Alibaba's online marketplace and Yintai stores has been slow, even though the companies set up a unified membership system for their shoppers.

Traditional retailers such as Yintai and Suning have suffered sales slides amid the rise of e-commerce as more shoppers look online for cheaper products and more convenient purchases.

Compared to Yintai and other department store operators, Suning has moved furthest into the Internet arena. Since 2009, it has invested heavily in its online sales platform in the hopes of building an integrated business chain that links Net sales with its brick-and-mortar stores.

Suning was the third-largest retail site in the country last year with 3.2 percent of the total sales, after the Alibaba site Tmall (60 percent) and JD.com (18.6 percent), according to iResearch Consulting Group. But it is still struggling to improve its financials after the huge investments in its online capabilities. On July 30, the company reported a 927 million yuan loss for the first half this year, 10.3 million yuan less than the same period last year.

Analysts said Alibaba is counting on Suning's supply chain, network of physical stores, logistics system and after-sales services to provide a boost to its electronics and household appliance business. Suning said it operates more than 1,600 retail stores across the country and 3,000 after-sales offices, and has another 5,000 affiliated service partners.

On August 12, Alibaba announced a lower-than-expected second quarter revenue figure of 20.1 billion yuan. That represented year-on-year growth of 28 percent, which was the lowest figure since the company went public in September last year.

This lackluster performance has the company eying other opportunities, especially home appliances. According to a report by the China Center for Information Industry Development, a government-backed think tank, online sales of electronics and appliances totaled 13.6 billion yuan in the first half of the year, up 64 percent from the same period last year. That growth outpaced the annual average of 39 percent for the entire online retail sector, the report said.

Under their agreement, Suning and Alibaba's Tmall site will cooperate on appliance sales, and Suning's logistics and delivery systems will be integrated into Cainiao, Alibaba's logistics arm. Suning's physical stores are to provide after-sales services for all online and offline sales, while Alipay, the online payment service affiliated with Alibaba, will provide payment services for Suning's customers.

Ultimately, the two companies want "to connect all of Suning's physical stores with Alibaba's system," Zhang Yong, Alibaba's CEO, said in a statement.

Wang Hanchao, an analyst at Haitong Securities, said the partnership will direct more traffic to Suning's store on the Tmall website, boosting sales. Suning is also expected to benefit from Alibaba's capacity in big data, the huge piles of information on consumer the Internet giant gathers. For its part, Alibaba will benefit from Suning's logistics and after-sales services.

But questions remain, such as how Suning's sales website, Suning.com, will be positioned vis-à-vis Tmall's electronics section. Furthermore, the two will need to work out a plan to distribute profits as they gradually combine their capabilities, Wang said.

Several e-commerce industry analysts said the deal between Alibaba and Suning was triggered in part by the partnership between JD.com and Yonghui Superstores. "This was the No. 1 and No. 3 players joining hands to beat the No. 2 player," one said.

After Alibaba's announcement, JD.com's share price on the Nasdaq fell nearly 20 percent over five straight trading days. But JD.com still envisions Yonghui's supply chain of fresh food as a source of new growth. Yonghui, which is based in Fuzhou, in the eastern province of Fujian, reported sales of 36.7 billion yuan last year, about 46 percent of that from fresh foods, including fruits, vegetables and meat products.

A growing number of e-commerce operators are expanding into fresh foods, which they see as providing sustainable demand. Earlier this year, JD.com launched a mobile application called Daojia to help sell fresh foods. It also made an investment in fruitday.com, a website that sells fruit.

A manager at JD.com who asked not to be named said that after the investment Yonghui's supply chain will be connected with Daojia, and the hope is this will greatly supplement the latter's supply of fresh products.

Yonghui has made its own efforts to tap the e-commerce market, but was unsuccessful. In 2013, it launched an online shopping site that closed after two months. And other traditional operators of superstores have sought to acquire shopping websites to expand their business. In July, Wal-mart Stores Inc. took full ownership of yihaodian.com, after it acquired a 51 percent stake in 2012. But the online grocery business is still not fully linked to Wal-mart.

Wang Xiaoxing, an analyst at the Internet data provider EnfoDesk, said the recent deals are sign of a rapid reshuffle of the retail sector. "The industry is undergoing a consolidation in search of supplemental business and mutual development. It is a natural trend when the industry reaches certain stage of development."