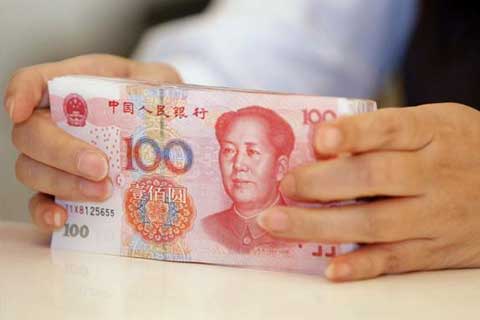 (Beijing) – China has permitted local governments and their financing platforms to trade another 1.2 trillion yuan worth of bank loans for less expensive bonds, bringing the total amount of debt that can be swapped this year to 3.2 trillion yuan.

Lou Jiwei, the finance minister, said on August 27 that the National People's Congress and the State Council, the country's cabinet, had approved a quota of 3.2 trillion yuan for this year's bond-loan swap arrangement. The Ministry of Finance announced earlier two batches that were each worth 1 trillion.

Local governments have issued a total of 1.82 trillion yuan worth of bonds as of August 27. That means bonds worth 2 trillion yuan will be sold over the rest of the year, said Li Qilin, an analyst at Minsheng Securities.

Data from the National Audit Office show that 1.86 trillion yuan of the nearly 18 trillion yuan worth of debt local governments racked up before June 30, 2013 – largely the result of aggressive infrastructure investment rolled out to soften the impact of the 2008 global financial crisis – must be repaid before the end of the year.

Lou said earlier that the ministry has been working with the central bank, the banking regulator and the National Development and Reform Commission, the country's top economic planner, to examine how much more local governments had borrowed in the 18 months that followed.

He said in a speech at Tsinghua University in April that local governments' direct debt had grown to 15 trillion yuan, up from less than 11 trillion yuan in June 2013. Their contingent liabilities may also increase fast if the economy continued to slow, he said.

The bonds issued by local governments are sold publicly to investors in the interbank bond market or privately to banks, and the proceeds are used to pay off debt. The bond yields are lower than the interest rate on bank loans.

Proponents of the exchange argue that it will cut the cost of financing for local governments, and borrowing through bonds rather than bank loans means more transparency.

Using public records, Caixin calculated that about 30 percent of the bonds meant for replacing bank loans would be sold to existing debtors through privately negotiated deals.

Whether a private issuance can go through depends on whether the bank still wants to keep the debt. So far this is an open question, said Zhao Quanhou from the finance ministry's Research Institute for Fiscal Science. Bankers had mixed feelings about the bonds, as some thought they are a safe investment, but other said the yields are too low.