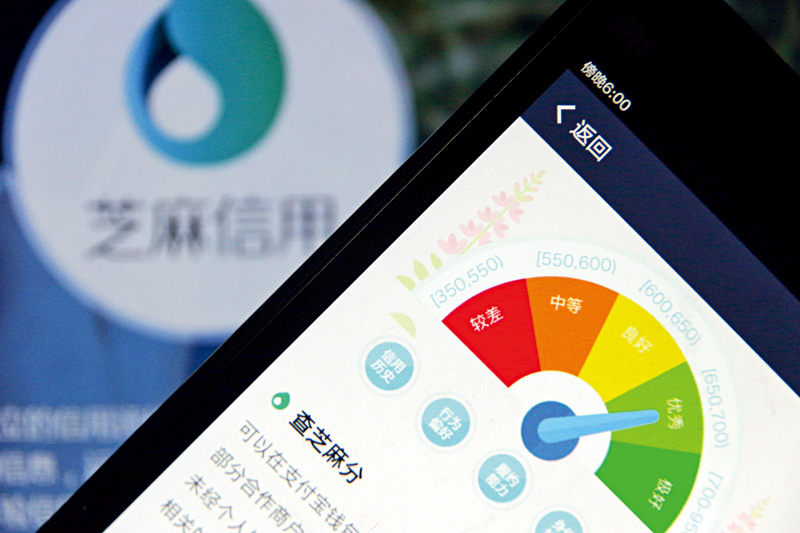 (Beijing) – China's central bank has frowned upon some of the tactics a firm related to Alibaba Group Holding Ltd. recently used to promote its individual credit scoring service, amid criticism that they are inappropriate for the business.

Sesame Credit Management Co., a subsidiary of Alibaba-linked Ant Financial Services Group, was one of the eight companies the central bank chose this year to run individual credit scoring services that had been provided only by the government.

It provides users of Alipay, the country's most popular online payment service, a score ranging from 350 to 950 based on data collected from Alibaba's shopping websites as well as banks and other companies that agree to share information with Sesame Credit. The higher the score, the more trustworthy a person is considered.

Sesame has been promoting the service mainly through cooperation with other companies, such as hotels and car rental firms. Consumers with high credit scores can book rooms or rent cars without leaving a deposit. High scorers can also pay for certain purchases only after they decide they are satisfied with it.

Experts have questioned the legitimacy of using such benefits to attract customers, but the central bank had been largely silent on the matter – until recently.

One Sesame promotional campaign that caught the regulator's attention allowed people with a credit score of 750 or higher to enjoy fast check-in through a VIP channel at Beijing Capital International Airport.

"This is unimaginable, unheard of," a senior financial expert from the World Bank said. He said individual credit score are private and should not be used for marketing purposes.

Industry sources estimate that less than one in 1,000 of Alipay's 400 million users have a credit score of 750 or higher. An employee from the payment company said the number is small, but he did not reveal it.

Sesame intended to extend the offer from September 15 to October 14, but had to cut it short after the central bank told it to stop, people close to the regulator said. It has promised to remove all related advertising at the airport but keep the channel open only people who have already used it.

The people close to the central bank said the regulator has also told Sesame it disapproves of the way the firm advertised its service in another promotional campaign, which involved nearly 30 million students in more than 3,000 colleges and universities around the country, from September 9 to 24.

Students were challenged to take part in games that compared their credit scores with friends, classmates and people from other schools. Competitions were also held between universities, and winners were promised a total of 5 million yuan in cash rewards.

It is unclear whether the central bank has taken any action involving this promotion.

One of the sources said the regulator believes these operations are "against standards and norms." He did not say what those standards and norms are, but added that the central bank would soon release a regulation, the first of its kind in the country, on how individual credit information should be gathered and used.

Critics have questioned whether it is appropriate to advertise credit scoring for individuals the way Sesame has. Describing the firm's recent promotions as relying "excessively on entertainment," a person in the industry familiar with Sesame said it "misled people and affected companies that run the business of credit information seriously."

"This is not fair, especially for independent third-party companies," he said.

Many of the benefits Sesame has used to attract customers are unheard of in other countries, said Lai Jinchang, an expert on financial infrastructure at the International Finance Corp. (IFC), which belongs to the World Bank Group. The IFC has helped China and many other developing countries build their systems for credit information.

"The business of credit information is a serious thing," Lai said. There are internationally followed norms – written into the law in many countries – for how data should be collected and used for calculating credit scores, and the scores cannot be used at will, he said.

According to John Wang, senior vice president at Wells Fargo & Co., the U.S. law requires that credit information be used for only the purposes of lending, jobs, insurance and renting. The restriction means "companies providing (individual) credit information services rely primarily on long-term cooperation with banks, offer products to them and do not face customers directly," he said.

Many of Sesame's marketing gimmicks are innovative and may help more people realize the importance of keeping a good credit history, Wang said, but if were they used in the U.S., a court could have deemed them a violation of the law.

"Sesame Score is like a clever but naughty boy," he said. "He might grow up to be a very successful man or he might end up being a criminal."

Some critics of Sesame said the promotions were less about educating people about the importance of credit scores than getting more users to download Alipay Wallet – the Alipay mobile application – and use Ant's other services more often.

"It is not about high credit scores; it is about Alipay spending money to promote Alipay Wallet," a person familiar with Sesame said speaking of the firm's recent promotions. "They were in fact advertisements for Alipay because you can only get a high score when you use Alipay."

Besides, there are many ways to rig a person's Sesame score, an expert from the China Micro-credit Companies Association said. He told a Caixin reporter that, for example, "we can keep transferring money to each other's Alipay account every day, and it will enable both of our scores to increase continually."

"The real credit score measures a person's ability and willingness to repay loans based on real transactions and will not change too much in a short period of time," he said.