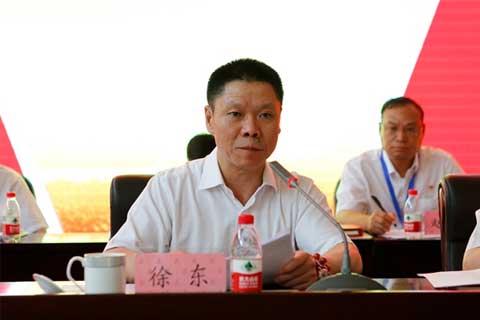 Xu Dong at a meeting in Urumqi in July

(Beijing) – A third official at the body that oversees the aviation industry has come under investigation, says a person close to the Civil Aviation Administration of China (CAAC), a sign that a large campaign against graft that started nearly three years ago is entering a new phase.

Xu Dong, who heads a trade union at the CAAC's Air Traffic Management Bureau, has not been seen at work since August 4, the day an inquiry into accusations he took bribes started, the source said.

The investigation into Xu is the result of a two-month inspection of the CAAC's activities that was conducted by the ruling Communist Party, the person said.

A CAAC spokesperson declined to comment on Xu when a Caixin reporter called.

Xu, who is in his 50s, took over the labor union, which includes all of the country's air traffic controllers, in 2013, the CAAC's website says. He served as the chief accountant of the Air Traffic Management Bureau for five years starting in 2008.

During his time as chief accountant, Xu supervised Liu Dehua, who formerly headed the bureau's financial office, the source close to the CAAC said.

An investigation into Liu, now the assistant to the head of the Air Traffic Management Bureau, started on July 13, the person said.

A third official, Su Hong, was detained by the inspectors looking into the CAAC's affairs on August 10, a person with knowledge of the matter said.

Su, who ran an office that handled affairs for domestic flights – such as granting permission for routes, authorizing deals between aviation companies and selecting airport ground service companies – has told investigators about bribes and embezzlement involving 10 million yuan, that source said.

The party mounted a huge fight against corruption in late 2012, when Xi Jinping took over as its general secretary. The campaign has netted a slew of political, military and other figures, and is now rattling the aviation industry.

A fourth figure who used to be Su's supervisor at the CAAC has also been linked to the scandal, China Business News has reported. Shi Boli, general manager of Beijing Capital International Airport Co. Ltd., became the subject of a probe on September 14, a source with knowledge of the matter told the newspaper.

Shi took the job at Beijing's main airport in April last year, and before that headed of the CAAC's Transportation Department, the newspaper reported. The airport said in a statement on September 17 that Shi had resigned.

Analysts said the Air Traffic Management Bureau and Transportation Department are fertile ground for graft because they arrange flights with airlines, and buy airport equipment and services from companies.

Zhang Zhizhong, a former head of the Transportation Department, was sentenced to 12 years in prison in 2010 for taking bribes. Zhang left the CAAC to become the chief of the Beijing airport in 2007 when his predecessor, Li Peiying, was investigated for bribery and embezzlement.

Li was tried for corruption and executed in August 2009.