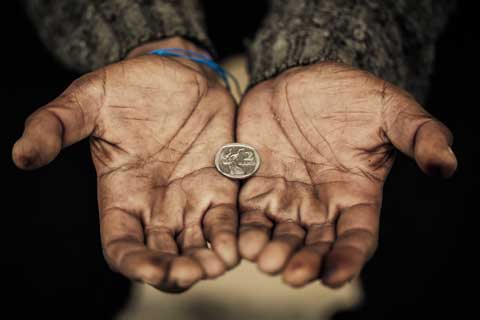 (Beijing) – China must cut the portion of its population living in extreme poverty by an average of more than 11 million people every year from 2015 to 2020 to meet the ruling Communist Party's goal of building a moderately well-off society by the end of the decade, says a government official, but doing that will be difficult.

"Absent special and significant measures, it will be very difficult to complete the task," Hong Tianyun, deputy director of the Leading Group Office of Poverty Alleviation and Development under the State Council, said at a press conference on October 12.

A Chinese person is considered to be living in extreme poverty if his annual income is 2,300 yuan or less, or about 6.3 yuan per day. As of the end of 2014, more than 70 million people were still living below the poverty line, Hong said, citing data from the National Bureau of Statistics.

China cut the number of people living below the poverty line by 16.5 million in 2013 and 12.3 million last year, Hong said.

"Despite the economy slowing and the pressure of employment getting stronger, we think it is still possible to achieve the target of reducing it again by 10 million this year," he said.

Hong said the government must be more resolute in several ways to reduce poverty, including by improving vocational education, health care and social security insurance for rural residents and diversifying the channels of raising funds that can be used to move people from poor areas.

He said the government has been working on developing a national big data system for poverty alleviation, noting that a lack of supervision in the past has led to government subsidies being abused.

The National Audit Office said on October 8 the county government of Mashan, in the southern region of Guangxi, had been handing out poverty alleviation funds to more than 3,000 people that do not meet requirements for the subsidy.

The auditors also found the government was exaggerating its progress on reducing the number of people who live below the poverty line.

Hong mentioned the auditor's report on Mashan and said the government will not be lenient with anyone who takes advantage of poverty alleviation funds.

The Chinese poverty line is below the one drawn by the World Bank, which was increased recently from US$ 1.25 per day per person to US$ 1.9.

Chinese researchers and officials have been conducting analysis and trying to calculate how much of the population fell under the World Bank's new poverty line, but the number is not available yet, said Li Chunguang, a colleague of Hong's in charge of cross-border cooperation on reducing poverty.