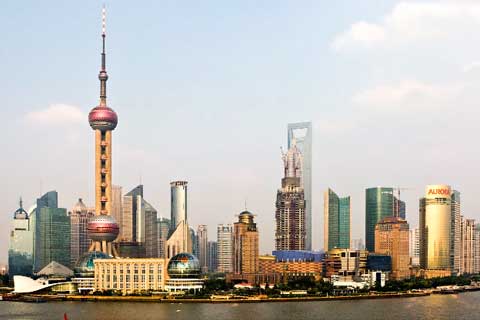 (Shanghai) – Authorities in Shanghai have suspended the auction of a plot of premium residential land as the city government comes under pressure to rein in housing prices.

Shanghai's planning and land bureau issued a notice on October 12 that said it is halting the planned auction of a 14.85 hectare plot of land in the Yangpu District because "more preparations are needed to have the land developed."

Yangpu is a central district in Shanghai across the Huangpu River from the Pudong financial district.

Six developers had signed up for the auction on October 14, officials said. The bidding was to start at just over 4 billion yuan.

Zhang Hongwei, head of the research unit at Shanghai-based Tospur Real Estate Consulting Co. Ltd., said the government halted the sale of the land to prevent the property market from overheating.

Shanghai's mayor, Han Zheng, said this month that the city has made controlling housing prices a priority.

"The housing prices in Shanghai are already high and if we fail to rein in the market, it will not only harm economic stability and sustainability, but also the city's competitiveness," he warned.

Han also vowed to address other problems in the eastern city's real estate market, saying Shanghai had too many office buildings and shopping malls, but homes, particularly smaller ones, are in short supply.

Data from the research unit of Fang.com, a housing agency, and China Index Academy, said that prices for the more than 31,000 homes sold in the city in the first three quarters of the year were 47 percent higher – up to more than 32,500 yuan per square meter – than prices in 2001.

Home prices have been rising in cities around China this year. In Shenzhen, in the south, the average price of a unit sold in August was more than 38,000, 65.5 percent higher than the same month last year.

The price increase from July was 3.3 percent, marking the sixth straight month of rises.

A group of officials from the National Development and Reform Commission, visited Shanghai in June to study the housing market, said a person who was at a closed-door forum attended by officials working at the country's top economic planner.

The NDRC is particularly concerned about soaring prices in Shenzhen and also wants the Shanghai government can do something to rein in prices, the source said.

An executive from a major Shanghai property developer said buying land in the city is getting more difficult because prices are rising and the government is attaching many requirements to sales.