China Has No Reason to Fear the TPP 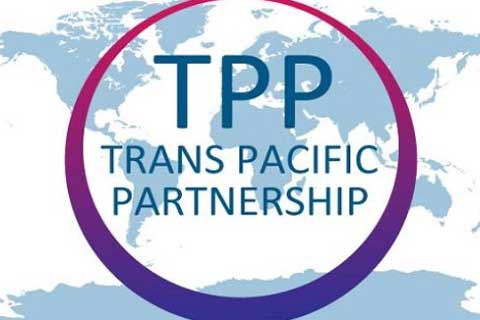 Twelve Pacific Rim countries have agreed on the Trans-Pacific Partnership (TPP) to further promote free trade among a bloc that accounts for nearly 40 percent of global GDP. The U.S.-led pact that conspicuously excludes China has triggered heated discussion in China, with some calling the trade group an "Economic NATO." Many other have expressed fears China will be isolated and marginalized.

We do not share these views. Rather, we think China should see the TPP as a window of opportunity to push for further reform and opening up as a way to address the challenges it faces.

Amid the hype over an apparently imminent agreement on the TPP during the 2011 APEC Summit in Hawaii, we published an editorial under the headline Reform Progress Puts China on a TPP Track The world economy and China have changed greatly over the past four years, but as the country grapples with a slowing economy and external pressures, we stand by this conviction.

It is true that the TPP is more comprehensive and has higher standards than existing multilateral trade agreements. It is not only intended to lower or eliminate tariffs, but also encourages good governance policies aimed at leveling the playing field for all its trade partners. On top of that, it sets higher standards for the environment, intellectual property and labor protections. It has stringent requirements on state-owned companies that countries like Japan might not able to meet, not to mention China, where the state sector still weighs heavily on the economy.

The launch of the TPP resembles in many ways China's bid for WTO membership 14 years ago, when the country scrambled to meet the criteria necessary for joining, a move that helped catapult China to the prosperity and growth we see today. Similarly, many of the standards in the TPP tally with the goals China has set for itself.

Of course, China needs to chart a path for development in accordance with its own agenda. But the reform and opening up of the past 36 years have demonstrated that the country can overcome one challenge after another precisely because it has pushed for greater integration into the global economy. To that end, the TPP should be welcome as a force for nurturing free trade and greater integration of economies in the Asia-Pacific region.

For these reasons it is obvious that China should be open-minded about the TPP, viewing it not as a threat, but as a yardstick for the country to work on its weaknesses. It was all well and good for China to watch from the sideline as talks on the TPP progressed over the past few years, but it must act now because the country can only protect its interests if it takes a proactive role in multilateral trade negotiations while forging ahead with reforms on the domestic front.

Whether China should join the TPP is an issue that has been hotly debated. Some have predicted that frictions among signatory countries will slow its progress. But as a growing number of countries in the region have joined or expressed interest in joining, some in China now argue that many bilateral trade agreements Beijing has signed with other nations will offset the impact of the TPP. Others say that since the U.S.-led effort was designed to contain and isolate China, Washington will be determined to keep China out no matter what efforts it makes.

But these conspiracy theories fall short because even some TPP members acknowledge that an agreement without China will lack far-reaching significance. As the world's second-largest economy, China stands more of a chance than many other countries to get involved in TPP negotiations if it wants, because of its enormous clout in global trade.

The bid for WTO membership certainly taught China a lot about trade negotiations. But in hindsight, China also went through a learning curve when embracing the WTO, judging by the disdain it showed toward the organization as a club for rich countries in the 1990s. Looking back at what China has developed over the past decade plus, few can ignore how much it has benefited from globalization and how much the world economy has grown along with this prosperity.

The TPP is likely to face some uncertainty. China can still exert influence in shaping the regional trade order in any number of ways, such as via the "belt and road" initiatives; talks on a Bilateral Investment Treaty with the United States; or the ASEAN+3 framework, which includes China, Japan and South Korea; and the more inclusive Free Trade Area of the Asia-Pacific.

However, none of these can replace the TPP. Beijing could always make preparation for negotiations even as it assesses the pros and cons of membership. Furthermore, bilateral or regional free-trade talks have become a trend because working via the WTO and other multilateral avenues has somehow hit a snag, particularly given that the Doha round of talks are inching ahead at a snail's pace. So while China makes concessions to help move the WTO talks forward, it should also be proactive in other trade negotiations, including in the TPP talks.

A Ministry of Commerce spokesperson said the day after the TPP agreement was reached that China is open to all initiatives that are based on WTO rules or which are conducive to economic integration of Asia-Pacific. This response is encouraging. WTO membership brought China some challenges, but it also meant more opportunities. The TPP could one day do the same.