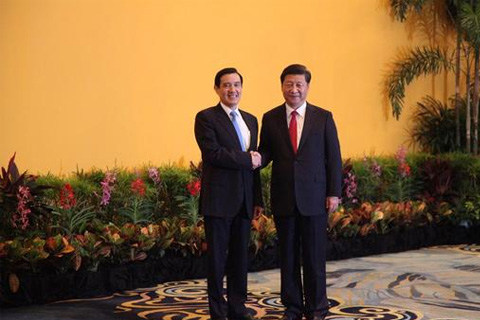 (Beijing) – The top leaders of the mainland and Taiwan have met for the first time in over six decades.

At the historic meeting in Singapore on November 7, Xi Jinping and Ma Ying-jeou addressed each other as "mister" to get around any political awkwardness resulting from 66 years of animosity and separation. The two presidents greeted each other with a handshake that lasted nearly 90 seconds.

The meeting came as the two sides enjoy an unprecedented eight years of warm ties, even though relations are overshadowed by an election next year in Taiwan, one the pro-Taiwan Democratic Progressive Party is tipped to win.

The leaders, who held a closed-door meeting, both expressed a commitment to the 1992 Consensus as a platform for building trust, according to Ma and Zhang Zhijun, director of the mainland's Taiwan Affairs Office. That consensus refers to a verbal agreement reached during a meeting in Hong Kong between the mainland's Association for Relations Across the Taiwan Straits and Taiwan's Straits Exchange Foundation.

The consensus, as Xi interpreted it during his meeting with Ma, is a reflection of the "One China" principle, the idea that the mainland and Taiwan belong to one China and that cross-strait ties are not a relationship between two countries or between China and Taiwan.

Xi's interpretation is in line with what mainland authorities have said many times. But by reiterating it in a face-to-face meeting with a Taiwanese leader, he sought to stress its importance, consistency and unambiguity.

Zhang said Xi also expressed the mainland's strong commitment to safeguarding national sovereignty and territorial integrity, and its opposition to any separatist movement.

In driving this point home, Zhang said, Xi is apparently seeking to dispel the illusion some politicians in Taiwan may harbor that authorities in Beijing have to engage with Taiwan's Democratic Progressive Party and its leader, Tsai Ing-wen, should the party that has rejected the consensus win the election.

For his part, Ma echoed Xi's take on the consensus, but he also took the opportunity during the meeting with Xi and an ensuing press conference to emphasize differences in how the one-China policy has been interpreted.

Ma's commitment to the principle will win the trust and empathy of his mainland counterparts. But given that China is officially called the People's Republic of China and Taiwan is called the Republic of China, he intends to ease any tensions back home over his inclination for closer ties with the mainland.

During the meeting, Ma proposed opening a hotline between the mainland's Taiwan Affairs Office and Taiwan's Mainland Affairs Council to deal with emergencies.

He said he was also frank with Xi in stating that the public in Taiwan is worried that the mainland's military is focused on Taiwan, a fear that includes a large number of missiles. Xi responded by saying the deployments are not aimed at Taiwan.

Ma said he told Xi about problems people in Taiwan often experience when participating in the activities of international non-governmental organizations, and he also complained that when Taiwan's government takes part in regional activities, it is met with interference.

"I hope that the hostility and opposition in this area can be reduced, especially regarding the NGOs," Ma said.

Ma said that Xi promised to "deal with individual situations as long as they will not give the impression that there are two Chinas or one China and one Taiwan."

These exchanges may not seem extraordinary or beyond public expectations. However, the talks have made history not just because both leaders can come together after decades of animosity, but also because they touched upon sensitive issues linked to international affairs and security.

Looking back at cross-strait relations over the past six decades, the meeting between Xi and Ma was no doubt a breakthrough. If both sides can take this further by turning the meeting into a regular consultation mechanism, they could bring about a new era.