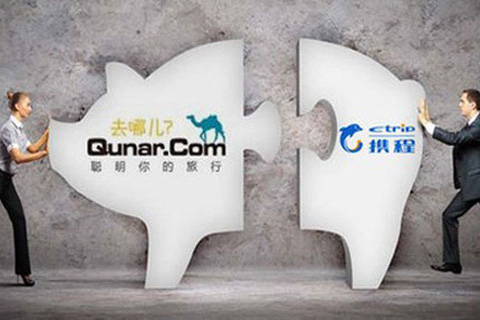 (Beijing) – The business of selling airline tickets and resort vacations to China's holiday-happy consumer class is now a battleground for Internet giants, following a deal that builds muscle for Ctrip.com International Ltd.

In the deal, Baidu transferred 45 percent of its stake in Qunar to Ctrip. In turn, Baidu got a 25 percent stake in Ctrip. The swap strengthened Ctrip's grip on what market research institution iResearch says is China's 270 billion yuan online travel agency market. Ctrip already owns 37 percent of eLong Inc. and 6 percent of Tuniu Corp., which also market travel services.

Ctrip and Baidu said in separate statements that the share transfer highlighted the decision to "bind together" the two travel agencies. Baidu retains control of about 20 percent of Qunar.

The tie-up of the two Nasdaq-listed companies with a combined market value of US$ 18 billion set the stage for a three-way travel market battle pitting Baidu and its new partner Ctrip against the nation's dominant social media company Tencent Holdings Ltd. as well as e-commerce leader Alibaba Group.

Tencent has an online travel information section on its qq.com, an instant messenger. The company has also invested US$ 84 million in travel service providers eLong in 2011 and US$ 78 million in LY.com in 2014.

Alibaba, meanwhile, has had one foot in the travel agency door since 2010 by selling ticket and hotel booking services through its Tmall and Taobao websites. It's also invested millions of U.S. dollars in several online travel sites including qyer.com and baicheng.com. And in October 2014, Alibaba formally launched an own travel service division called Alitrip.

But through their new partnership, Ctrip and Qunar now account for nearly 70 percent of all revenues generated through the country's online travel market.

As the competition heats up, the sector's major players are testing a variety of business models, Alitrip President Li Shaohua said. And with every new model there's hope for new profit opportunities.

"In the future," Li said, "the online travel service market will be huge. A new era is just beginning."

Shortly after Ctrip and Baidu announced their Qunar deal, Alibaba CEO Zhang Yong struck a competitive chord by declaring in a conference with analysts that his company would "continue to invest" in the travel service business.

Alitrip's Li followed that comment by pitching his service as an open platform through which travelers and qualified service providers can find each other. Future plans call for offering various traveler conveniences, such as hotel room deposit waivers based on a client's credit record with Alibaba.

Alitrip is already a strong competitor. Li said that in its first year of operations the company signed up more than 100 million members and averaged more than 10 million daily webpage views. But it's still several laps behind Ctrip and Qunar.

In the second quarter of this year, according to market data provider Analysys, Ctrip controlled 39 percent of the online travel agency market in China, compared to 30 percent for Qunar and Alitrip's 11.8 percent.

And although big brands rule the market, a number of new players have recently joined the online travel services game. One is the group-buying website company Meituan.com, which for the second half of this year reported 5.3 billion yuan worth of hotel bookings as well as 1.8 billion yuan worth of other travel-related deals. Meituan established a new division in July aimed at expanding its services.

Nevertheless, the country's online travel giants have fortified their market positions in ways that should keep their new rivals at bay for a long time. This situation has, in fact, been expected by industry watchers.

For several years the market had good reason to anticipate a Ctrip-Qunar merger. After the deal was announced, Ctrip Chairman and CEO James Liang said that various investors along with executives from his company, Qunar and Baidu had been discussing a potential partnership for years before the final agreement was hammered out.

All parties saw the merger as a way to streamline business and counteract competitive pressure, Liang said. "A shareholding tie-up can help avoid vicious competition," he said, adding the merger talks ended with a deal signed against the backdrop of weakening business environment.

Under the deal, Ctrip got one Qunar American Depositary Receipt on the Nasdaq for each 72.5 percent of one Ctrip ADR handed to Baidu. The swap value was equivalent to a 36.4 percent premium based on Qunar's October 25 share price. Ctrip won four seats on Qunar's board of directors, while Qunar got two seats on Ctrip's board.

"The agreement was reached because everyone felt it was urgently needed," said Liang.

But investor enthusiasm and general growth for the travel booking market in terms of customer volume has not hidden the fact that many companies in this industry in the country are running in the red.

Ctrip outperformed its rivals by posting a 143 million yuan net profit for the second quarter, a 5.9 percent increase from the same period last year. That was a significant improvement from the fourth quarter of 2014, when the company blamed new investments for a 224 million yuan loss.

"Ctrip's business has turned profitable," Liang said. "Profits would have been higher if there had not been so a huge amount of spending."

Baidu, meanwhile, has been singled out by market analysts as the biggest winner in the deal between Ctrip and Qunar. The search engine had controlled Qunar since buying a 62 percent stake for US$ 306 million in July 2011, just a few months after expanding into what was then a fledgling market for online travel services.

For years since then, Qunar has struggled to make money and Baidu has moved into new business ventures with new investment demands. A person close to Ctrip who asked not to be named said in the months before the Qunar deal that Baidu "had to make a decision" because it "needed capital to support its business expansions in other areas."

But the investment capital needed for Baidu's new ventures was not expected to come from Qunar, since the travel service "had little hope of achieving profits" anytime in the near future, the source said.

Meanwhile, Ctrip saw a deal with Baidu as a way to access Qunar's platform and gain technological advantages. Liang said through Qunar, for example, Ctrip will be able to tie its services into Baidu's online map services, search engine and other resources that should increase Ctrip's customer traffic.

The source said Ctrip and Qunar will likely continue to operate separately yet complement one another. Ctrip will focus on business traveler hotel and ticket booking operations, while Qunar functions mainly as a platform for a variety of travel services based on search and price comparisons.

"The tie-up will make Ctrip stronger," Liang said. "The future of this cooperation is promising."

But the merger also presents challenges for the companies involved. Baidu, for example, must "figure out how to integrate and distribute traffic and resources between Ctrip and Qunar," the person close to Ctrip said.

An analyst said Ctrip and Qunar will have to "integrate their overlapping businesses and departments, while better coordinating (their services) with some of Baidu's services."

Moreover, at least for now, Ctrip and other travel booking sites are expected to continue relying on investments to keep their businesses growing. They're also being forced by the competitive environment to offer services at discounted rates, an analyst said.