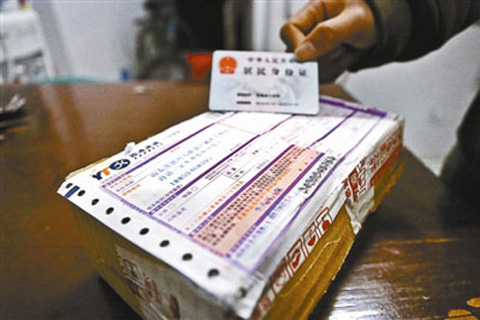 The government told delivery companies that starting November 1 individuals sending packages must prove their identity by providing their ID card numbers. The move is part of a campaign launched by 15 central government departments and agencies in October to step up scrutiny of the world's largest express-delivery market following a series of parcel bomb blasts that killed 10 people in the southern region of Guangxi in late September.

But the policy will not improve in security of the delivery industry. Rather, it places a burden on delivery companies and creates risks related to the leaking of personal information.

Starting on October 22, courier companies are also being required to be more watchful for explosives and dangerous goods by performing checks before parcels are sealed, requiring clients to submit their real names and X-ray scanning all packages.

This is not the first time the government has addressed the matter. In 2014, the State Post Bureau started a pilot in Beijing, Guangdong, Yunnan, Tibet and Xinjiang.

The original intention for the latest change was to improve security, but problems emerged in implementation.

First, an ID card with an 18-digit number is the most widely used and recognized proof of identity in the country. However, the law says holders are only required to show their cards when legislation passed by the National People's Congress or administrative measures passed by the State Council demand it. Neither the postal bureau nor the government departments and agencies that announced made the latest requirement fall into this category.

Second, the essence of the real-name policy is the "know your customer" concept. This requires much more than simply taking down a person's ID number. Faithful implementation of the principle at a bank, for example, requires bankers to not only verify a client's identity using a picture ID, but also to collect information as to the purpose of using a service. Requiring this in the delivery industry will significantly increase the costs for courier companies.

Leaving aside whether companies can meet this standard, a person bent on causing some harm by mailing explosives will find many ways to circumvent or cheat the name requirement. In this sense, the change accomplishes little and only increases the risk of a privacy leak.

The solution to the security problem in the courier industry is not to require users to provide their personal information but to enhance inspection procedures. As long as companies detect parcels containing hazardous materials and explosives before sealing them, security will be ensured.

A bigger problem with the name registration policy is that it reflects a lack of regard for how ID numbers should be used and protected.

An ID number, which remains valid for an ID holder's lifetime, is used in China to get a driver's license, pay taxes, get married, open bank accounts, register for mobile phone subscriptions, buy airline tickets, check in at hotels and sometimes even shop online. The cards are occasionally needed to enter government buildings.

The pervasive use of the ID number means that a leak could be very damaging. This is true because many records are available if an ID number is known. (The design of the ID number is flawed because a smart person could figure out someone's digits, if he knew when and where they were born, but that is a separate matter.)

Considering all of this, the government should be extremely cautious with using ID numbers to verify identities. This is especially true because many delivery workers, who are usually poorly educated, do not understand the significance of protecting client information.

All of this shows China must reform its identification system starting with diversifying the ways people prove their identities. The government could issue separate cards with separate number that are used for different purposes. The numbers could be linked to the same person in a government database, but not openly accessible online.

People should also be allowed to use other photo ID to prove their identity. Only in cases that require stricter checks, such as opening bank accounts and paying taxes, should an ID card be required. In other cases, such as checking in at a hotel, a driver's license with its own unique number should suffice.