Wang Jianlin on Why the Wanda Phenomenon Works 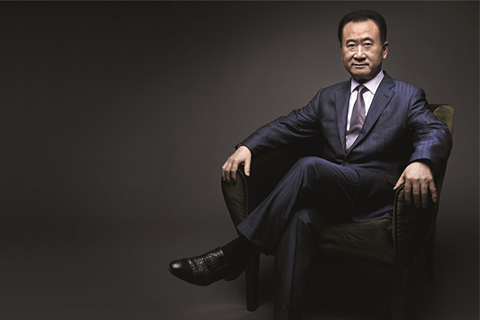 (Boston) – The US$ 2.6 billion buyout of cinema chain AMC Entertainment in 2012 and the 45 million euro acquisition of the Spanish soccer team Atletico Madrid in January were just two of many globe-spanning deals in recent years that elevated the Chinese conglomerate Dalian Wanda Group and its founder Wang Jianlin to celebrity status.

Wang's star rose even higher in October when he was named China's richest person by the Hurun Rich List, a Shanghai-based wealth tracker, with 220 billion yuan in personal assets – 52 percent above his 2014 net worth.

Much of Wang's success can be traced to Wanda's rapid expansion over the past two decades. The company began as a residential real estate developer but later moved into commercial real estate. Subsequent business moves embraced the entertainment, sports and financing sectors.

Wanda's knack for raising money from investors and racing to complete building projects earned the company sweetheart status among local governments in cities nationwide. As of January 1, Wanda's real estate unit had built 125 Wanda Plaza commercial-retail projects nationwide. In the first half of 2015, the unit reported revenues of 73.4 billion yuan, up 12 percent from the same period last year.

Wang was born in 1954 in Sichuan Province, the son of a senior Communist Party cadre. He spent more than 16 years in the military. In 1986, he returned to civilian life and landed a government job in Dalian, a port city in the northeast. Three years later, he started the predecessor of today's Wanda Group and appointed himself chairman.

While delivering a speech at a Harvard University open class on October 29, Wang credited Wanda's business model and sound management for the company's rapid growth. He also acknowledged that Xi's relatives had invested in Wanda Commercial along with more than 10 other private investors. Altogether, these investors provided more than 4 billion yuan, making theirs the biggest private investment ever in a private Chinese enterprise. Two months before last year's IPO, Wang said, Deng and Qi sold all of their shares.

After the Harvard address, Wang granted Caixin an exclusive interview near the university at a Boston hotel. During the interview, he described his company's goals, including the quest for sustainable growth and new business opportunities in the financial sector. Excerpts of the interview follow.

Caixin: Wanda got its start in real estate but later expanded into entertainment, tourism and financial services. Why?

We initially expanded into commercial projects after residential project development because the former leads to a more stable flow of capital. But it's risky to solely rely on selling property. So we decided to further diversify.

On one hand, we will reduce property assets. Before the end of this year, we will announce several deals. We will launch Real Estate Investment Trusts (REITs) on overseas markets. There are no REITs in the (Chinese) market, but we will launch a semi-REIT product later to provide a sustainable channel for capital flow.

On the other hand, in the process of growing Wanda's cultural entertainment and tourism businesses, and with the development of online-to-offline (O2O) services, we have found possibilities for Wanda in the area of finance. We recently set up a financial division.

One of Wanda's biggest advantages is its huge, offline resource (physical stores) with our large customer flows. We want to take advantage of this by setting up an Internet finance company under the financial division. It will include the e-commerce website ffan.com and the online payment service 99Bill Corp. assets. We will also set up a credit ratings company.

Will the credit ratings company provide services for individuals or companies? What about licensing issues?

It will mainly focus on credit ratings for individuals. We are applying for a license. Wanda's credit ratings business advantage is that we have huge flow of customers inside the shopping malls we operate. We are also in talks with other malls to cooperate in the areas of data and information systems. By the end of 2020, we will be able to access data on about 500 million offline (physical store) shoppers who pay more than 20 billion visits to our shops (every year). This consumption data is valuable.

Meanwhile, we are also improving transaction systems at our malls and partner shops. We named the system Cloud POS. It will be compatible with all types of payment services, from cash to quick-response (QR) code scanning. It will help us better evaluate customer cash flow and offer them credit services.

Wanda's Internet financial services will be truly O2O format and consist of four segments: big data, credit ratings, payments and loans. Teams for these businesses are ready to go.

One major problem is their lack of offline resources. They haven't found a way to overtake the traditional financial industry. Jack Ma once said, "If banks don't change, we will change them." Did he make it? I don't think so.

One problem that Internet companies face is that they think the Internet is omnipotent, and that victory can be achieved by controlling huge amounts of data and access to the Internet. But I don't think they've made a real breakthrough.

Wanda's goal is to connect more than 4,000 malls (operated by Wanda and its partners) over the next five years. This will involve more than 2 million vendors. This underscores our offline competitiveness.

What's Wanda's plan for the banking and securities business?

We have acquired a securities firm. We planned to buy a bank but adjusted that idea while turning to Internet financing. We are eyeing the banking business as a source of capital. This can be achieved by offering online financial products.

We won't open a bank but we can cooperate with banks. We have had discussions with banks, and we have been warmly welcomed.

What's your opinion of the O2O business?

I think O2O is promising, but not the O2O business of the Internet companies. Those who win in the O2O sector will be offline companies. It's easier to expand from offline to online than the other way around. Alibaba, Tencent and Baidu are aggressively expanding in this sector but they lack experience in running physical stores.

Moreover, Internet companies have relied heavily on investments. That will present a main obstacle for them as they do O2O business. They tend to spend money carelessly because fundraising is easy. But that's hard to sustain. Of course, this is only my personal opinion. I think offline companies are more likely to succeed.

Will Wanda launch more acquisitions in the entertainment sector?

There will be more acquisitions in both the movie and sports sectors. Our goal is to have a filmmaking asset listed by the end of next year. Our sports segment will be mature by 2017. Wanda will also get involved in a series of sporting events, which are set to be announced around Chinese New Year 2016. That's when everyone will understand our values and what we are doing.

For example, we will organize an international skiing competition this year in Jilin Province. And starting in 2017, we will organize a world-class competitive skiing event every winter that's already been approved by the International Ski Federation. It will be operated by Infront Sports & Media. It will be the first skiing event of its kind in China.

When we acquired Infront, many said the deal would be risky since it was unclear that whether China would win for hosting the 2022 Winter Olympics. But we did a lot of research and were confident that China would succeed.

There are other game plans awaiting approval. Wanda will launch some events next year that have never before been held in China. They will supplement our sporting business and help the overseas sporting assets we acquired operate smoothly.

You mentioned a plan to list Wanda's film assets. Where will that IPO be launched?

Definitely in China. Our theater assets have been listed and we also want to list the filmmaking and publication assets. But we have not decided whether to repackage the listed assets or list them separately.

How will Wanda balance its commercial, entertainment and financial segments in the future?

They are equally important. But I am counting more on the entertainment and financial divisions as they may work out some unprecedented model. China currently has a few, large resorts. Wanda has opened three and is building another seven. We plan to operate more than 20 major resorts nationwide. Our target is to attract more than 200 million visitors to our resorts over the next three years, making us the world's No. 1 resort operator. Combining tourism and sports businesses would leave a door open for more imaginative endeavors.

Tourism includes traveling, catering and accommodations. Leisure travel is becoming fashionable in China, and we will profit from it. In 2014, I invested in a hotel in a small, seaside city in Australia – a city that receives 21.6 million visitors a year, each of whom stays an average 8.3 nights. This is a city of only 500,000 people that gets a tremendous boost from tourism.

You have made a lot of acquisitions. Have you ever hesitated or felt nervous about a deal?

I was nervous about the AMC acquisition because it was our first overseas deal. At the time, though, we felt it was a good price. And we felt we would feel regret it if we didn't do it.

Many institutional investors say now is a good time to invest in sports. What do you think?

They are right. But the question is how to boost China's sporting sector development. There are four areas in which reform has been lagging in China: health care, education, cultural entertainment and sports. These have been only lightly touched by reform. There is almost no sporting industry in China, as it is mostly controlled by the state.

We normally only invest in upstream companies with market influence, such as World Triathlon Corp. and Infront. They either control intellectual property rights or operate sporting events. My goal is to acquire as many world-famous games as possible and use these game operations as a model for China. Next year, Wanda will announce at least two major acquisitions.

Do you follow any principles when expanding into new business areas?