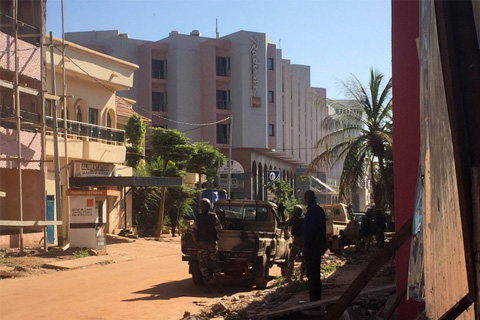 The deaths of three Chinese executives in an attack on November 20 in a hotel in Mali were both shocking and distressing. The company they worked for, state-owned China Railway Construction Corp. (CRCC), is also feeling a sudden loss to its management team.

The dead are a general manager and deputy general manager of China Railway International Corp., the overseas business arm of CRCC, and the head of CRCC's West Africa operations. The violent attack caused the biggest loss for Chinese companies' overseas operations in recent years.

The tragedy rings alarm bells for the many Chinese firms expanding abroad. In recent years, Chinese business operations have grown rapidly in many conflict-ridden countries in Africa and the Middle East, mainly focusing on energy and infrastructure projects. Big state firms including the oil giants, China State Construction Engineering Corp. and the CRCC all have large investments and thousands of employees in these regions.

Worsening political problems and a rise in terror activities pose increasing challenges for companies, which need to protect their employees and assets. As firms continue their expansion into highly unpredictable markets, the experiences of Western multinationals such as Exxon Mobil Corp., Royal Dutch Shell and BP may be helpful.

For one thing, these companies have all set up powerful support systems to help their managers in the field. These systems entail the use of modern telecom and Internet technologies, technical support, business guidance and services to companies' overseas operations. An efficient system will reduce a company's overseas workforce and its exposure to risk. It will also help expatriates easily communicate with headquarters and get the support and resources they need from home. This assistance improves the capacity of individual workers and reduces the need to send employees abroad, creating job opportunities for locals.

The system will also help a headquarters better monitor and collect information about its overseas operations, helping it to address problems associated with incomplete information.

Western oil companies all have efficient and standardized systems to support their overseas businesses. These programs have many functions, including equipment monitoring, personnel tracking and more – and all of it helps run a new business in a remote and unfamiliar market.

In contrast, Chinese companies, including the oil giants and major state construction firms, still rely on sending employees to solve specific problems on site. This approach – still in place even though the firms have operated overseas for more than two decades – puts an inordinate amount of emphasis on the ability of individual executives to deal with risks and uncertainties.

It is time for Chinese companies to update the way they run their operations abroad by adopting management systems that follow international standards. Sustainable business operations in foreign lands should not rely on a handful of individuals however capable, but rather efficient institutional arrangements. Adopting these support systems will help Chinese companies to grow into real multinationals.

Lu Ruquan is the director of the Strategic Development Department of CNPC International Ltd.