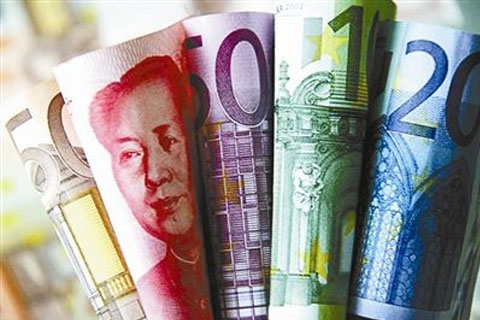 (Beijing) – The International Monetary Fund has announced it will include the yuan in the basket of currencies that make up its special drawing rights (SDR) upon completion of a review of the basket of reserve assets by its executive board.

The new SDR, which already included the U.S. dollar, euro, yen and British pound, will take effect on October 1, 2016.

The IMF's managing director, Christine Lagarde, hailed the decision as "an important milestone" in the integration of China's economy into the global financial system, and said it also recognizes the progress that Chinese authorities have made in recent years in reforming monetary and financial systems.

Some analysts argue that including the yuan in the SDR basket will prompt central banks and private investors around the world to increase their yuan-denominated holdings. Others say the move is largely symbolic, but will still require China to continue with reform and opening up.

Data from the IMF show that only 38 central banks have yuan-denominated holdings that total 780 billion yuan, or 1.1 percent of total foreign reserves held by central banks around the world. Meanwhile, the U.S. dollar accounts for 64 percent and the euro 21 percent. About 4.1 percent of global reserves are in pounds and another 3.4 percent are in yen.

Zhou Chengjun, deputy head of a department overseeing monetary policy at the People's Bank of China, said there is a lot of room for use of the yuan as a reserve currency to increase.

"Officials from many countries have told me that they have begun to use the yuan as a reserve currency, though we're unable to put it in numbers," he said.

The former chairman of Goldman Sachs Asset Management, Jim O'Neill, said that many investment institutions, including insurance firms and pension fund management companies, that did not have yuan assets would quickly respond to the IMF's decision and put yuan-denominated holdings in their portfolios.

And Standard Chartered Bank estimated that nearly US$ 1 trillion will be invested in China's bond market by the end of 2020.

However, Barry Eichengreen, a professor at the University of California Berkeley, said that the IMF's decision is symbolic because many investors were already aware of the rising status of the yuan as an international currency.

Martin Wolf, the chief economic commentator for the Financial Times newspaper, said the IMF's decision will have little impact on the use of the yuan internationally given that the SDR regime has been marginalized in the international monetary system.

While the inclusion of the yuan in the SDR basket will further facilitate the internationalization of yuan, this does not mean China's currency will automatically become a global reserve currency, some analysts said.

Zhang Ming, a Chinese Academy of Social Sciences professor who specializes in international investment research, said that the key factor in whether the yuan will overtake the pound and yen as a more popular reserve currency in the next decade is China maintaining growth of 6 to 7 percent.

The international status of the yuan will also depend on the development of financial markets in China and progress in reforming the exchange and interest rate regimes, he said.

O'Neill said that without financial reforms and further opening up, China's efforts to push for greater adoption of the yuan in international payments and trade would backfire because the currency would be exposed to more risks.

Zhou said that the decision to make the yuan an SDR currency indeed recognizes it was as an international currency, but it also means China is obliged to align its financial system with international standards via further reforms of the financial market and greater opening up.