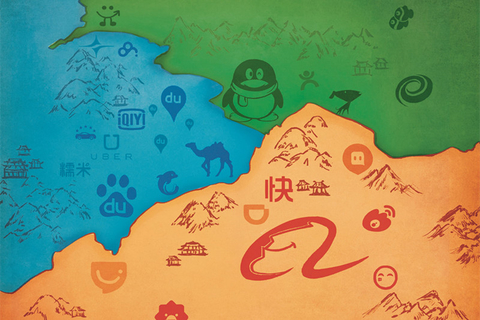 (Beijing) – Back in 2005, China's Internet landscape was dominated by a handful of companies such as Sina Corp. and NetEase Inc.

Now, the Internet in China is all about Baidu, Alibaba and Tencent – a pyramid of power often referred to as the "BAT." And nothing tells the story of their buildup from strength to strength more than a string of mergers and acquisitions that closed in 2015, each orchestrated by one of the BATs.

Four up-and-coming Internet business sectors in the country that were operated by smaller companies last year also came under BAT control in 2015.

It all started in February with the merger of taxi-hailing mobile applications Didi Dache and Kuaidi Dache. Behind the merger was Tencent. Tencent was also a force behind the merger of classified ad websites 58.com and Ganji.com in April. Then Baidu was waiting in the wings when the online travel service sites Ctrip.com and Qunar.com combined their businesses in October. That same month Alibaba played a role in the tie-up of group-buying websites Meituan.com and Dianping.com.

Bao Fan, the founder of the investment bank China Renaissance Partners, said consolidations of Internet companies through the BATs in 2015 were to be expected. The BATs held stakes in many of these smaller companies even before the mergers, he noted.

"At some point, capital investments will certainly seek maximum benefits," Bao said. "This has to be achieved by integration and creating some kind of market monopoly."

Through these deals, each BAT member has mapped out a business strategy that covers a wide rage of e-commerce businesses, and that connects online and offline services ranging from banking to insurance to health care services.

Some experts have expressed concerns about the BAT's growing clout.

"No one can escape the BAT's influence," said Wang Lixing, managing director at China Renaissance Parters. "Entrepreneurs' attitudes toward the BAT are complicated. They long for resources and support, but they don't want to fall under the BAT's control too much."

Meanwhile, the government has taken note of the merger process and is monitoring the BAT's role in the ever-changing cyberspace market.

Baidu's securing of two director seats and a one-quarter stake in the coutnry's largest travel service, Ctrip, in October followed the announcement that the travel agent and Qunar, a search engine for travel reservations, would merge. Wang said the deal helped Baidu catch up with Alibaba and Tencent in terms of online travel booking business.

Ctrip and Qunar account for nearly 70 percent of all revenues generated by the nation's online travel agents.

At a September conference, Baidu's chairman, Robin Li, said his company wants to do more to connect people with the information they need by using its search engine as a springboard for a broader range of services. In pursuit of that goal, Baidu in recent years launched an app and an online map service, and invested in the group-buying website Nuomi.com.

In September and October, according to a Baidu investment record obtained by Caixin, the search giant invested more than US$ 600 million in five Internet companies including Ctrip. Other targets included companies offering online health care services, Internet security services and e-commerce.

Expanding into non-Internet services and then linking these services to the search business is a core strategy for Baidu, said Xu.

Baidu's strategy is also being shaped by how fellow BAT members Alibaba and Tencent have been contributing to Internet sector consolidation.

Tencent was the engine driving Meituan-Dianping agreement, said sources close to the deal. About one month after the merger was announced, Tencent said it would invest US$ 1 billion in the new company.

Tencent was also behind the April merger of 58.com and Ganji.com. The BAT member has become a major 58.com stakeholder, having bought 19 percent of the company for US$ 736 million in 2014. It strengthened its position with another US$ 400 million investment in August.

An investor familiar with Tencent said the company wants to cultivate a "forest" of services centered on QQ and its messaging app WeChat. In this way, Tencent plans to "create an ecosystem, so that everyone can thrive," said the investor.

Tong Shihao, a partner at the U.S. venture capital firm GGV Capital, said Tencent is building bridges between its messaging platforms and service provides. In the future, Tong said, Tencent must "support as many good third-party service providers as possible to make its WeChat and QQ more popular."

Meanwhile, Alibaba has also been expanding its offline services influence. State media reported in late November that Alibaba was mulling a plan to invest US$ 1.5 billion for a 30 percent stake in the restaurant reservations website Ele.me. Previously, Alibaba had spent US$ 6 billion to develop the restaurant review website Koubei.com. Industry experts said Alibaba's reported interest in Ele.me was partly triggered by investments by Baidu and Tencent in Nuomi and Meituan-Dianping.

Alibaba is experiencing slower growth of its e-commerce websites such as Taobao and Tmall in the face of stronger competition from rival JD.com, analysts said. Analysts say that means the company will need more business platforms on which to build new centers of growth.

Another growth area is online financing. Each BAT member has expanded into this field, but Alibaba has taken the lead by winning government licenses for a variety of services through its payment platform Alipay and financial unit Ant Financial Services Group. These are now offering online payment, wealth management, online banking and credit rating services.

Baidu is in the financial sector game, too, but "has lagged behind," said an investment bank source who asked not to be named.

Baidu was licensed to sell fund products through the Internet in April last year, about two years after Alipay and Tenpay received their first licenses. The search company still needs to apply for banking and insurance business licenses to tap new businesses.

Zeng Fang, a banking expert at the Chinese Academy of Social Sciences, said financial institutions hope to take advantage of the fact that Baidu's website attracts a huge amount of "very valuable" traffic.

Yet the BAT group still faces regulatory hurdles in the financial services arena, especially regarding how new accounts are opened. Current rules require a consumer who wants to open a new bank account to be physically present when filing application forms – something that's impossible for an Internet-only bank. Some Internet banks have gotten over this hurdle by cutting deals with traditional banks, but more hurdles remain.

Questions have also been raised over whether the BAT members may be going too far and building monopolies.

A financial institution source who asked not to be named noted that Alibaba "has built up a complete financial services framework." Now, he said, the company has to make sure the framework does not become a monopoly.

Another target of monopoly watchers is Alibaba's online health care services provider Alijk.com, which sells medicine. Chen Hongmin, an economics professor at Shanghai Jiaotong University, said Alijk can access nationwide drug sales data that could give it an unfair advantage over competitors.

The data access issue has also been raised during discussions about the BAT's influence in online finance and other sectors.

An executive at a data analysis company who asked not to be named said there are good reasons to be concerned about the huge amount of information controlled by BAT members in their databases. For example, he said, Internet companies that offer financing as well as credit rating services "are playing the roles of referee and athlete at the same time."

But one analyst said Baidu, Alibaba and Tencent should be treated with tolerance by regulators, since each company rose to power through market forces, not government support.

Chen agreed that Internet companies deserve a measure of tolerance, since giving them room to adapt and grow will encourage development of the whole industry. Regulators, though, should pay close attention to prevent unfair competition and other market influence abuses, he said.

"It's natural for the BAT companies to seek monopolies," said an employee of Baidu's strategic business department. "Investment is a weapon they can use" against other companies.