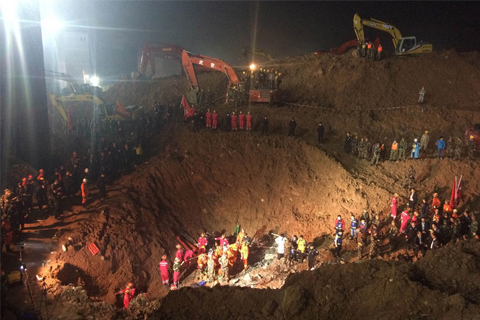 (Shenzhen) – A company hired by the government to monitor a landfill in Shenzhen told its operator it should halt operations due to safety concerns just four days before a deadly collapse, but the advice was ignored, an executive of the firm said on December 23.

He also said his company learned in September that dirt stored at the facility was not being properly compressed, providing a possible explanation for why the landfill collapsed on December 20, sending a tidal wave of dirt racing down a hill and into an industrial park area filled with factory buildings and worker dormitories.

Seven bodies have been recovered from the disaster zone and another 76 were missing as of December 24, rescuers told media outlets in Shenzhen, the bustling city in southern China that borders Hong Kong.

The government of the Guangming New District where the disaster occurred hired J-star to examine operations at the landfill in July, Bian said. He added that his company's oversight efforts continued up until the day of the collapse.

The government had been monitoring the facility before hiring J-Star, Bian said. It was unclear why the government procured his firm's services.

J-star discovered in September that Yixianglong was not properly compressing the soil dumped at the landfill and dirt was sinking in some areas, Bian said. He also said that J-star sent a notice to Yixianglong in October asking it to measure the density of the soil dumped on some slopes and deal with erosion problems. Bian did not say if Yixianglong complied with the request.

Dirt was piled 95 meters high as of the night before the collapse, an employee of J-star said.

Some 100,000 cubic meters of soil was dumped in the landfill over the past three months, Bian said. A person working at the facility said that would have earned Yixianglong 2.5 million yuan.

The warning J-star gave to Yixianglong was not the first the operator of the landfill had received. An environmental impact assessment report published in January on the website of the Guangming New District indicated the facility could pose a risk to the nearby industrial parks.

That report was removed from the site after the collapse.

Questions are also being raised about how Yixianglong gained control of the landfill in the first place. Shenzhen Luwei Property Management Co. Ltd. won a tender to build and operate the facility in August 2013, an announcement on a government website says.

However, an employee of Luwei said on December 21 that it signed a contract with Yixianglong to hand over the license to run the facility if it won the bidding.

That arrangement could violate laws covering how tenders are handled. He Hongfeng, a law professor from Nankai University in Tianjin, said that while a company winning a bid to build a landfill can contract out projects with permission from the government, it cannot transfer the "principle part of a project" to another firm.

An executive of Yixianglong was taken away by police on December 22, a company employee said.