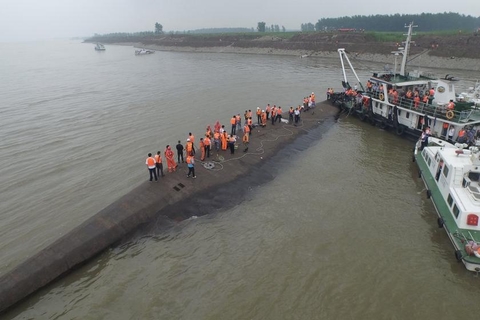 (Beijing) – Dozens of officials and executives received warnings or demotions for problems found during an inquiry into a ship capsizing on the Yangtze River, but a team of government investigators concluded that the disaster that took more than 440 lives was mainly due to poor weather.

A team sent by the cabinet to investigate the capsizing of the Dongfang Zhixing, or Eastern Star, on June 1 ruled that extreme weather was to blame for the disaster. A report on the team's findings was released on December 30.

However, the investigators also said they uncovered a range of irregularities linked to oversight of a cruise ship company in the southwestern city of Chongqing and vessels it operates on Yangtze River. For instance, the firm, Chongqing Dongfang Cruise Shipping Co., did not tell regulators as required about changes to the vessel's two ballast tanks last year, the report said.

It did not say how much the changes contributed to the capsizing. Routine inspections by safety officials in Chongqing failed to uncover the violation, the report said.

The ship's captain, deputy and crew members were found to have faked training certificates required to get a license to work on a cruise ship. Zhang Shunwen, the captain of Eastern Star, survived the disaster. He has been fired and had his captain's license revoked, and prosecutors are deciding whether criminal charges should be filed against him.

Thirty six officials involved in running ports, work safety departments and other government agencies in Chongqing, including the Communist Party secretary of the city's Wanzhou District, Wang Xiangan, have been punished over the capsizing, the report said.

All of the penalties were either demotions or warnings, the report said.

The Eastern Star had 454 people on board, including 398 passengers, most of them retirees. The vessel left Nanjing, in the eastern province of Jiangsu, on May 28 and was to arrive in Chongqing 10 days later.

The vessel overturned in a section of the Yangtze in Jianli County, in the central province of Hubei, about 9:30 p.m. on June 1, the investigators' report said. Only 12 people survived.

The investigation team was composed of specialists from academic institutions and central government agencies, including the Ministry of Public Security.

The investigators said in their report that from 9 p.m. to 10 p.m. the night of the incident a cyclone packing winds of 38 meters per second and heavy rain pounded the area where the 76 meter ship was cruising. More than 94 millimeters of rain fell that hour, the report said.

The report, based on survivor interviews and on data from meteorological departments and telecoms companies with GPS services, said the crew lost control of the vessel when it started moving backward. The Eastern Star overturned two minutes later.

Maritime authorities in Yueyang, in the central province of Hunan, were the first to get word on the disaster, hearing it from a passing ship that pulled two people out of water, the report said. The central government learned of the incident three hours later, it said.