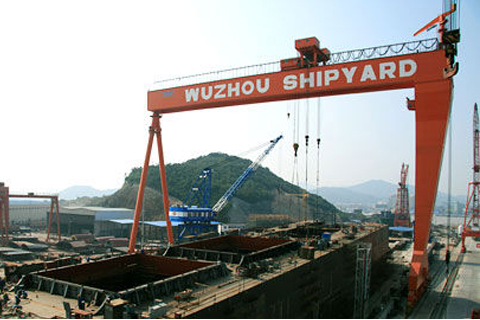 (Shanghai) - A court in the eastern province of Zhejiang said it recently accepted a bankruptcy case involving a state-owned shipbuilder, the first government-backed company to go under amid an industry slowdown.

The court said it had frozen the assets of Wuzhou Ship Repairing & Building, which was founded in 2001. The shipbuilder had debts of 911 million yuan and total assets of 534 million yuan as of September 30 this year, its financial report showed.

Wuzhou Ship Repairing & Building started having financial difficulties last year, a person with knowledge of the matter said. Its parent gave it huge amounts of money only to see the situation worsen this year, the source said.

Other state-owned shipbuilders have indicated they are in trouble. Sainty Marine Corp. Ltd. and Wuhu Shipyard Co. Ltd. have both said in December they are on the verge of bankruptcy.

The shipbuilding industry has seen orders from abroad decline in 2015. Chinese shipbuilders have seen orders for new vessels fall sharply over the first three quarters of the year, said Li Yanqing, a researcher at China Shipbuilding Industry Corp.

The falloff was mainly due to a lack of orders for bulk carriers. Less than 60 orders for the ships were placed around the world in the first seven months of the year, 90 percent less than in the same period of last year, said Clarkson Research Studies, a shipping information provider.

An executive of one private shipbuilder told Caixin that some large builders were keeping operations going simply by taking orders that would yield little or no profit.

The shipping industry is correspondingly weak. The Baltic Dry Index (BDI), which tracks the prices of shipping raw materials, stood on 471 on December 17, the lowest figure in three decades. The highest figure – 11,793 – was in May 2008.