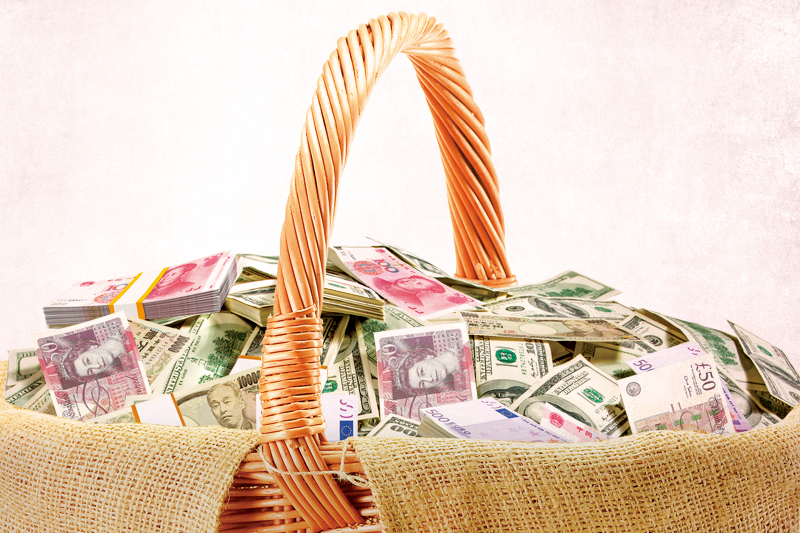 (Beijing) – Advocates of financial reform consider the International Monetary Fund's plan to add the yuan to its special drawing rights (SDR) currency basket as momentous as the World Trade Organization's welcome in 2001.

From central bankers to analysts, China's pro-reform community is cheering the IMF's November decision to roll out the welcome mat, putting the yuan on track to join the U.S. dollar, euro, yen and pound in the basket next fall. Overseas scholars interviewed by Caixin said SDR status for the Chinese currency could be a catalyst for global financial reform.

The country is thus poised for a repeat of its success with reform after joining the WTO, said Liang Hong, chief economist at China International Capital Corp., one of the nation's largest investment banks.

"In the future, after many years have passed, we will see that SDR inclusion will have an impact on the Chinese financial industry that's as significant as WTO accession in pushing forward structural economic reforms in China," said Liang.

Yi pledged that once the yuan joins the SDR club, "China will continue its reform steps, moving toward financial liberalization as scheduled, with no delays."

Indeed, in the weeks since the IMF's announcement, financial regulators have rolled out several measures that allow for a more open capital account and greater flexibility for the yuan's exchange rate against foreign currencies.

On December 7, the State Administration of Foreign Exchange (SAFE) said it was easing control of the Qualified Foreign Institutional Investor (QFII) program, through which overseas asset management firms and banks invest in Chinese financial markets. Four days later, the central bank gave the green light to pilot projects to liberalize capital accounts for companies within the free trade zones in Tianjin and the coastal provinces of Guangdong and Fujian.

Guan Tao, a former SAFE official and a senior researcher at a think tank called China Finance 40 Forum, said capital account liberalization reforms have advanced to the "point where (the process) is irreversible." Future reforms will carry the torch beyond the regulatory arena into the real economy, he said.

Liang also used the word "irreversible" to describe the direction of financial reform in the wake of the IMF decision which, if all goes as planned, would culminate with the yuan joining the SDR on October 1.

Liang said the speed with which the capital account is liberalizing should be determined by market conditions, which is why she says capital inflow controls will be eased quicker in 2016 than capital outflow controls. Regulators are likely to be more cautious about outflow controls due to concerns that the outward flow is rising, she said.

SDR inclusion is also expected to encourage the central bank to gradually ease its intervention in yuan-U.S. dollar exchanges, said Liang. If the yuan continues to be closely pegged to the dollar, she said, the dollar's weight in the SDR basket will be enhanced, working against the goal of supporting a diverse currency basket.

Beyond the country's borders, experts say, reforms spurred by the yuan's SDR inclusion are likely to deeply affect the global financial system. SDR status for the yuan is expected to enhance the country's influence among the G-20 group of the world's leading economies. China, which has the G-20 rotating chair position this year, called for talks on IMF's quotas and corporate governance reform, sovereign debt restructuring, capital flow rules, building a global financial safety net, and enhancing the role of the SDR in global finance at a December 20 meeting in the southern city of Sanya that included high-ranking finance officials from G-20 countries.

Discussions were held within the context of a resumption of the G-20's International Financial Architecture Working Group. The group, which has been suspended since 2012, was organized in response to the 2008 global financial crisis.

Barry Eichengreen, a professor at the University of California-Berkeley, said the IMF should be allowed to tap the SDR spigot when a liquidity shortage occurs. Eichengreen said he expects China to take the lead in widening SDR activity by issuing SDR-priced government bonds and encouraging other G-20 members to follow suit as a foundation for an SDR currency market.

"Undoubtedly, there will be costs" to wider use of the SDR system, Eichengreen said. "But it's an investment in a more stable international monetary system."

Cooper and other scholars have also called for expanding the role of the SDR basket in pricing assets by issuing SDR-priced bonds. Cooper said OPEC countries have discussed SDR-based oil pricing for years, but never took action.

Any expansion of the SDR's role in global finance would first require a streamlining of the IMF decision-making process, said Eichengreen, in ways that give top executives at the IMF more power to make SDR-related decisions.

Calls to reform the international financial system grew louder after the 2008 crisis. Major reform was on the G-20 agenda for the group's 2011 meeting, but it was bumped to make room for discussions on sovereign debt problems in the eurozone.

Plans to reform the IMF quota and governance systems moved forward in December with support from the U.S. Congress. The fund's per-member nation quota was expected to double, while China's quota was raised to 6.39 percent from 3.99 percent, making the country the fund's third-largest shareholder after the United States and Japan.

British economist Jim O'Neill, formerly a chief economist at Goldman Sachs, considers including the yuan in the SDR basket "the best opportunity" for much-anticipated reforms to the international monetary system.

Jose-Antonio Ocampo, a professor in the School of International and Public Affairs and at Columbia University, said China's effort to push global reforms will easily win support from other countries. Especially supportive will be emerging economies that are now experiencing capital outflows, he said.

Yu Yongding, research fellow at the Chinese Academy of Social Sciences and a former member of the monetary policy committee under the People's Bank of China, said chairing the G-20 offers China a good opportunity to promote a greater role for the SDR.

But global reform progress may be slower than expected this year, Yu said. That's because although the U.S. dollar's dominance has been criticized for contributing to global financial market volatility, the dollar's appreciation usually weakens interest in change.

Gao Shanwen, chief economist at Essence Securities, said the yuan's SDR inclusion and internationalization will bring potential risks for China. But fear of risk should not stop the nation from tackling certain problems for future benefits, he said.

Other experts say they are concerned that the SDR move and yuan internationalization may destabilize domestic financial markets and deny the country a degree of monetary policy independence.

The sharp depreciation of the yuan against the dollar from August to early 2016 has fueled doubts about the wisdom of Beijing's push to reform the exchange rate system.

Mark Machin, Asia president of the Canada Pension Plan Investment Board, said the IMF's decision did not prompt his institution to make any immediate portfolio adjustments. But the pension fund will "gradually increase" its yuan assets, he said, according to the yuan's value and China's capital markets.

Liang said the SDR inclusion will in the long run boost the market's demand for yuan-based assets, which in turn should beef up the currency's value over time.

On December 11, the central bank's foreign-exchange trading system for the first time released details about the composition of the basket used for setting the yuan's value. The basket includes the U.S. dollar, euro, yen and 10 other currencies. Analysts said the move signaled the central bank's intention to loosen the yuan's peg to the U.S. dollar.

In the wake of the IMF decision, Gao said yuan rate flexibility is more important than ever. The fluctuation of the currency's value can help offset capital outflow pressure and even change economic fundamentals.