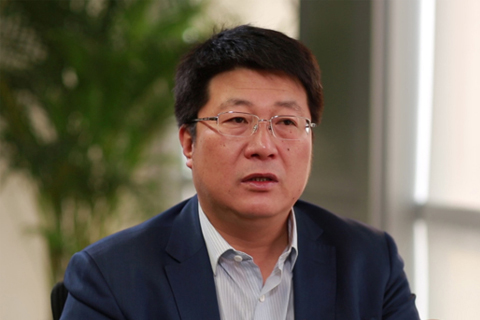 (Beijing) – A Beijing-based conglomerate vying for what could be the largest-ever acquisition of a foreign company by a Chinese buyer is tapping a multi-billion yuan war chest and riding China's push into semiconductor chip manufacturing.

Bankers are backing Unigroup, too. In February last year, China Development Bank, a government policy lender, extended a 20 billion line of credit that, according to a source close to the company, has yet to be tapped.

Unigroup also enjoys strong support from private investors. In May, the company announced a 22.5 billion yuan private placement. And in December, according to the company's website, Unigroup raised a combined US$ 80 billion through corporate bond sales by its overseas subsidiaries.

Investors recognize his company's tech-sector shopping spree and successful money-raising efforts as two pages from a business game plan that Unigroup has been following since 2013, Zhao said. The plan calls for attracting investors and then injecting newly acquired assets into Unigroup's stock market-listed subsidiaries, giving early investors a chance to cash out or stay in the game.

"It's like launching an IPO after inviting investors, but faster," he said.

Unigroup subsidiary Tongfang Guoxin Electronics Co. announced in November that it would try to raise 80 billion yuan through a private placement involving undisclosed investors. The Beijing-based company, which is listed on the Shenzhen stock market, makes computer chips.

Investors who see opportunities in Unigroup's strategy include those interested in strictly Chinese concerns such as Tongfang Guoxin and the conglomerate's links to global companies.

"Investors willing to follow Zhao's adventure are attracted by the gap between tech firm valuations firms in China and more mature markets," said a Unigroup investor who asked not to be named.

Unigroup launched 11 buyout attempts at home and abroad in 2015, Zhao said. By the end of the year, he said, agreements for nine deals had been reached that would cost the company at least 60 billion yuan in total.

Most funds for these deals and pending deals were made available through bank loans and money raised via private placements by Unigroup's listed subsidiaries, Zhao said.

The company's financial status pales when compared to the pile of money that's been committed for acquisitions negotiated last year. Zhao said he expects the company to report a 2015 net profit of 4 billion yuan on revenues of 50 billion yuan. Unigroup reported a net profit of just 628 million yuan in 2014.

Unigroup and its subsidiaries reported combined net assets of 35 billion yuan last year, up from just 200 million yuan in 2009, the year Zhao joined the company. Zhao told participants at an Internet industry conference in the capital in December that the company's assets are likely to double this year. Unigroup's business plan for the year calls for building a chip production facility.

H3C is the Chinese data networking unit of U.S. tech giant Hewlett-Packard Co., and Western Digital is a U.S.-based maker of hard drives and the owner of flash-drive manufacturer SanDisk.

Unigroup's shopping spree has also taken its executives to Taiwan, where the company invested a combined US$ 17.4 billion in three chip makers last year. Closed in Taiwan were deals for a 24.9 percent stake in Apple Inc. supplier Siliconware Precision Industries Co., 25 percent of ChipMOS and 25 percent of Powertech Technology Inc. – three companies with a combined 18 percent of the global market for semiconductor testing services.

Zhao said he caught buyout fever in 2012 while "randomly surfing financial news websites." That led to a two-pronged investment drive that by early 2014 had made Unigroup the largest Chinese manufacturer of smartphone chips.

While surfing, Zhao said he read that the Shanghai-based semiconductor maker Spreadtrum Communications Inc. "could be a target." At the time, Spreadtrum was one of China's largest makers of mobile phone chips.

Zhao was attracted to Spreadtrum's below average price-to-earnings ratio and its potential as a supplier to increasingly popular smartphones.

Zhao and Spreadtrum's CEO, Li Liyou, eventually hammered out terms of a US$ 1.78 billion takeover of Spreadtrum by Unigroup. The deal closed in December 2013, and Spreadtrum delisted from the Nasdaq exchange.

Meanwhile, in the heat of its Spreadtrum talks, Unigroup decided to cut a deal for a Spreadtrum rival, Shanghai-based RDA Microelectronics Inc. The US$ 907 million buyout was completed in November 2013.

Beijing Spreadtrum and RDA later found a friend in Intel Corp., the American chip giant. Intel paid US$ 1.5 billion in September 2014 for 20 percent of the Unigroup subsidiary, which represented a 279 percent premium on the price Unigroup paid for Spreadtrum and RDA.

After acquiring the smartphone suppliers, Unigroup turned its attention to overseas targets, fueling market speculation about the company's goals and possible ties to Chinese government strategies.

Seeds of speculation were sown in February 2015, when Unigroup was awarded about 10 percent of a 98.7 billion yuan fund created in September 2014 by the Ministry of Finance and several state companies. The National Semiconductor Industry Investment Fund (NSIIF) was designed to provide financial support for companies in the semiconductor chip industry.

The NSIIF was launched a few months after the State Council, China's cabinet, pledged official support for the semiconductor industry. It also came two years after the government started rolling out policies that encouraged domestic chip-sector companies to buy foreign companies in order to access their technological know-how.

Questions about Unigroup boiled over in Taiwan, where the chairman of computer parts firm and Apple's biggest supplier, Foxconn, Terry Gou, criticized Zhao's buyout moves as "speculative." Yet the executive's strategy was applauded by Ming-Kai Tsai, chairman of the chip manufacturing company MediaTek Inc.

Established in 1988, Unigroup is 51 percent owned by state-run Tsinghua Holdings, an investment arm of Beijing's prestigious Tsinghua University. The company started small as a manufacturer of computerized scanners and a seller of herbal medicine drinks.

According to business registration documents, Tsinghua Holdings has registered capital of 2.5 billion yuan and owns more than 40 companies. Its main assets include Unigroup, Tshinghua's science park operator, which is called Tus Holdings, and Tsinghua Tongfang Co., a computer manufacturer and Internet service provider.

Unigroup is one of several Tsinghua Holdings subsidiaries that have employed Zhao since 1997. The 48-year-old executive is a Tsinghua University alumnus.

Zhao said the enormous business potential he saw in a mobile phone chipmaker – not government policy – was behind his decision to buy Spreadtrum. Moreover, he said, managers of the finance ministry fund that backed Unigroup were only interested in the project's commercial potential.

"The NSIIF's investment in Unigroup was entirely a market-oriented decision," said Zhao, adding the company has no plans to seek similar support in the future. "Unigroup has a close relationship with the government, but it is not like other central government-owned companies that represent the government in business decisions. We are entirely market-oriented."

Zhao said that Chinese semiconductor chip and data storage device manufacturers have for years lagged behind U.S., Japanese and South Korean rivals. But Unigroup is poised to change that.

Tongfang Guoxin is developing its own memory chip; Beijing Spreadtrum and RDA are forging ahead with smartphone chips; and H3C is working with Shenzhen-listed arm Unisplendour Corp on their corporate network business. Unigroup is focusing on these three areas to drive its competitive strategy, said Gu Wenjun, chief analyst at the chip industry researcher ICwise.

Any skeptics who question the wisdom of Zhao's strategy may want to closely consider his track record. The Western Digital deal looked risky at first but later proved to be the right move at the right time. That's because the American company's value rose after it bought Sandisk in October for US$ 19 billion, a month after Unigroup became Western Digital's biggest stakeholder.

"Many analysts thought Zhao paid too much for Western Digital," said an industry expert who asked to remain anonymous. "But later, after the acquisition of SanDisk, it turned out to be a great deal."