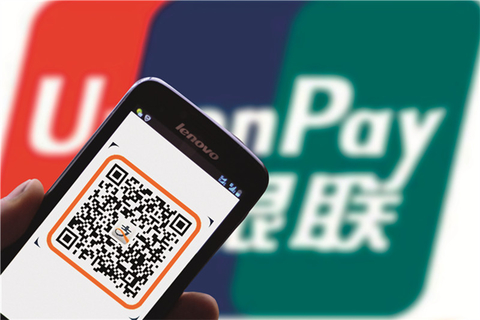 Although negotiations over potential profit-sharing and technical issues were continuing in mid-January, UnionPay signaled its confidence on December 18 by formally announcing mobile payment service partnerships with Apple and Samsung.

According to people with knowledge of the matter who asked not to be identified, UnionPay plans to negotiate separate partnerships with Chinese smartphone makers including Huawei Technologies Co., Xiaomi Inc., ZTE Corp. and Lenovo Group Ltd.

Each partnership will be designed to help shoppers breeze through checkouts by waving smartphones at UnionPay point-of-sale terminals. Smartphones and terminals would be linked via near-field communication (NFC) and software that device owners download from a bank website.

Exactly how the new service, called Quickpass, would mesh with existing ApplePay and Samsung Pay systems, which are available to owners of the manufacturers' iPhone and Galaxy devices outside the country, is a topic that's part of the talks with UnionPay, said a person in the banking sector. These and all other technical details were expected to be ironed out by late 2016.

Apple recently recruited a select group of iPhone owners in China to test the ApplePay function and, according to one source, received positive a response. People close to Samsung said it plans to launch a similar test for its system soon.

ApplePay was introduced in September 2014 and handles transactions only in the Unites States and Britain. Samsung Pay, which launched in August, signed 1 million customers and handled 100,000 transactions in South Korea during its first two months.

Chinese smartphone manufacturers are closely monitoring the new partnerships. An executive at a Shenzhen-based phone maker who asked not to be named said iPhone sales in the country could rise dramatically if ApplePay becomes available through QuickPass. And that jump in sales could encourage other smartphone makers to follow Apple's example.

Also watching are executives at Alibaba's Alipay and Tencent's Tenpay, which together control about four-fifths of the market in China and would rather not cede any ground to UnionPay and its smartphone partners.

As of the third quarter 2015, Alipay reported 190 million active users and Tenpay 150 million users of their mobile payment platforms. Tenpay works through the messaging app WeChat.

Smartphone users with Alipay and Tenpay systems installed can pay for products at a checkout by scanning a bar code on a cash register receipt. Money is then transferred from the customer's account to the shop's account via a WiFi connection.

Some mobile payment experts argue that an NFC system is a safer way to move money than a WiFi-based system since it will be more difficult to be attacked by hackers.

Despite the risks, many retailers say they prefer the Alipay and Tenpay systems because neither requires special equipment or high fees. QuickPass, on the other hand, only works at checkouts outfitted with POS terminals.

A shop owner in Beijing said the Tenpay system through WeChat is more convenient and costs a retailer less for equipment than QuickPass.

Moreover, there are commercial benefits to the parents of Tenpay and Alipay. One source said Alibaba is promoting Alipay not only because it is a convenient shopping tool but also because it gives the company access to valuable consumer data.

Jiang Haijian, who works as the deputy general manager of UnionPay's Mobile Payment Department, said his company is likewise exploring ways to enhance the value of QuickPass. "We are making efforts to offer more value-added services on top of traditional payment service to vendors," Jiang said.

Fifteen banks in the country have agreed to let customers of Apple Pay access their bank accounts through QuickPass. Jiang said he expects that number to swell to nearly 100 by the end of the year.

Jiang said the UnionPay-Apple partnership will follow a U.S. business model but meet all regulatory requirements in China. The partnership covers not only iPhones but iPads and iWatches, Jiang said.

UnionPay's image is sure to be helped by QuickPass among smartphone owners who feel comfortable with a mobile payment system. The fact that iPhones and Galaxy devices are already very popular in China will likely mean that the respect they already command will rub off on UnionPay, said Dong Zheng, chief editor of the credit card information portal 51card.com.

Jiang said that QuickPass developers want to simplify payment procedures and launch a service that lets shoppers pay for products by simply tapping a smartphone on a POS terminal. This method would eliminate the need to input a password or sign a receipt.

Meanwhile, Jiang said UnionPay plans to build bridges that link smartphone makers, banks and businesses so that they can jointly develop an NFC-based mobile payment market. That makes UnionPay's business model different with those of Alipay and WeChat, which encourages ties between customers and businesses.

Dong said the competition between UnionPay's Quickpass and the Alipay-Tenpay alliance is likely to focus on the area of small-scale payment services. Services connected to major transactions will continue to be handled directly by banks. Moreover, industry observers expect Quickpass, Alipay and Tenpay to eventually share the market for mobile payment in China.

"In the future, UnionPay and the Internet payment providers will coexist," Dong said. "They can't destroy each other."