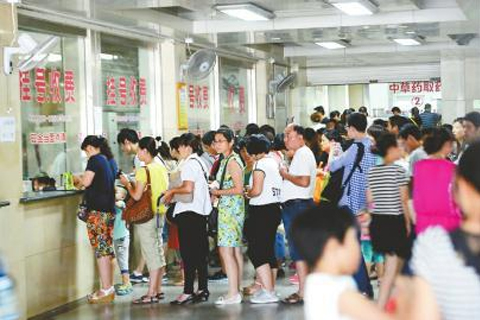 (Beijing) – A man we'll call Zhang Yong used to be a welder in Heilongjiang Province, but the economy in China's industrial heartland in the northeast has soured, so he has taken up unique employment in Beijing.

Each morning he rides his electric motorbike to Beijing Union Medical College Hospital, one of the top medical facilities in the capital, and walks into the lobby. Zhang, who is in his early 40s, then starts his day selling appointments for highly sought-after medical specialists to patients on the black market.

Zhang said he has been a scalper for two years, meaning he knows about all the best specialists at Beijing's top hospitals – and how to get his sick customers in to see them.

The key to his work is patience. In a country where waiting in line is often optional, the former welder spends several hours queuing to get a number to see a doctor, usually in seven days.

Zhang – and many others like him – then resells appointments, possible because the numbers he takes are not linked to anyone's real name or ID card. He usually pays a few dozen yuan for each number ticket, then resells it to patients for up to several thousand yuan.

Zhang says he's not ashamed about what he's doing because he works hard. He also invokes the firmest rules of business as another defense: "There is market because there is demand."

That appointments are being sold to the highest bidder in China's hospitals is no secret. Not only does scalping happen in the country's hospitals, but it is also rampant in the sale of train tickets and outside entertainment venues. It even occurs at national parks, especially on busy holidays, as long lines form for rides on river rafts, for example.

The latest uproar over hospital scalping started after a video went viral in January showing a woman railing about being charged 4,500 yuan for an appointment that should have cost 300 yuan.

The young woman, who judging by her accent was from outside Beijing, is livid in the clip. If what she said was true, she had reason to be. She says she waited for two days to make an appointment to see a physician at Guang'anmen Hospital, another top hospital in the capital, but was unable to get one.

The complaints she voiced resonated with many in the public, and spurred authorities to act. Beijing police said on January 29 they have detained 12 scalpers – five from Guang'anmen Hospital and seven from Beijing Union – and charged them with "disrupting public order."

Several top hospitals in Beijing have also announced they are taking steps to try to end the scalping. The changes include only taking appointments over the phone or on the Internet, and requiring people to use their real names and provide bankcard information.

Part of the reason scalpers have been thriving at major hospitals is an unequal distribution of medical services between cities and smaller towns. Many people in China flock to prestigious hospitals because they have little faith in the smaller ones close to home.

No official data on the number of appointments doctors at hospitals have every day is available, but Zhang said about 10,000 patients from around the country come to Beijing Union daily – far more than it can accommodate.

"People who have got to have an appointment come to people like me," he said. "It's as simple as that."

Zhang says he makes about 7,000 yuan a month scalping appointments, compared to the 2,700 yuan he earned as a welder.

Another scalper in Beijing whom we'll call Shen Yuan is a native of the northern province of Hebei. He says he's been reselling appointments for 14 years, and that new customers come to him because he gets good word-of-mouth from previous clients and has good knowledge of the specialists that are available.

Shen said that in years past he was able to pay hospital security guards and doctors to help him run his underground business, but this was no longer possible. He would not say how much their help had cost.

Even before the police crackdown and changes by the hospitals, reselling appointments was getting difficult, Shen said, but scalpers countered by teaming up to evade security guards and looking out for undercover police. Shen said that security guards have caught him several times and administered beatings, but he always returned to work.

Despite the crackdown, public scorn and occasional beatings, both Shen and Zhang said they are going to persist in their underground business. "Authorities can never weed out scalpers as long as patients are willing to pay," Shen said.

How will this be possible considering the crackdown and changes made by hospitals? Shen said he is using special software that allows his clients to make sought-after appointments on hospital websites before others can.