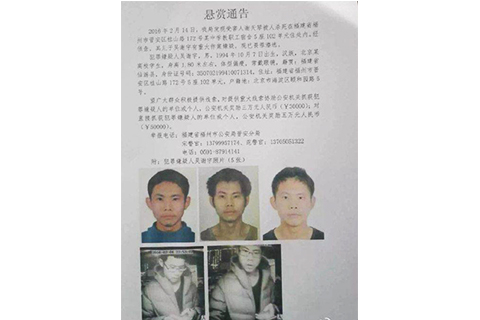 A police notice about Wu Xieyu, the main suspect in the killing of his mother, Xie Tianqin

(Beijing) – The case of a Peking University economics student wanted by police on suspicion he killed his mother has prompted a debate about the moral education of China's students and how universities are run.

Middle school educator Xie Tianqin was found dead at the teacher dormitory where she lived in Fuzhou, in the eastern province of Fujian, on February 14, according to a police notice circulating online.

The notice said her 22-year-old son, Wu Xieyu, is a prime suspect in her death and he "had fled for fear of being punished."

A person with knowledge of the investigation confirmed the notice is authentic.

Police have not said when or how Xie was killed, but the source told Caixin that the death likely occurred in early July last year.

Police checked payment records on Wu's smartphone and found that he bought knives, waterproof cloths and doctors' coats from online stores in June 2015, the source said.

The room was sealed to prevent odor from escaping, the person close to the probe said. Surveillance cameras believed to be linked to Wu's phone were installed in the room.

Wu apparently faked a resignation letter penned by his mother and sent it to her school, the source said. He then borrowed 1.44 million yuan from relatives by sending messages from his mother's smartphone. Wu told them the family needed the money to move to the United States.

Xie's body was finally found when a relative came to the dormitory to visit her, the source said.

Wu was accepted into Peking University, one of the country's most prestigious colleges, in 2012. He won scholarships there and was preparing for graduate school in the United States, his classmates said.

The case surprised Xu's classmates, who described him as friendly and warm-hearted. "There was no trace of him acting abnormally," one of them said.

Some Internet users said the case is a sign that China's students focus too much on doing well on tests and not enough on moral education.

Others said colleges should do more to address students' mental health issues.

"When talking about Peking University, people always think students are favored by God and have tremendous talent, but they forget they are just ordinary people who happen to do well at school," one Net user said. "They're limited and confused too."

Ren Fang, a member of the Chinese People's Political Consultative Conference, the country's top political advisory body, told state media on March 8 that news organizations should not make too much of the case, but said colleges should strengthen their mental health counseling programs.

Some Net users also said Peking University should bear some responsibility in the case. A classmate of Xu's told Caixin that he missed some of his final exams and had disappeared from campus in September.

Said another Internet user: "He didn't take exams and teachers didn't investigate? Did he register for the new semester? If he didn't, did the school look for him?"

The university said on Sina Weibo, China's version of Twitter, on March 3 that it is cooperating with the probe.

Calls to Peking University's School of Economics were not answered.