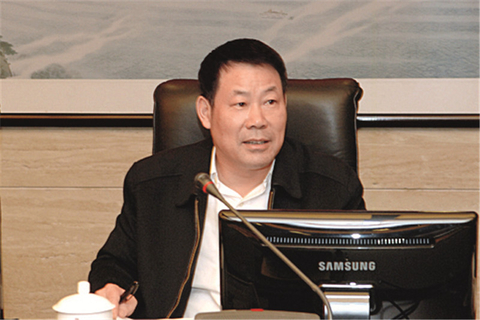 (Beijing) – A graft probe into the head of a state-run utilities firm in Shanghai put investigators on the trail of two top local government officials, people with knowledge of the matter say.

Investigators came across their first clues about wrongdoing by the government figures when interrogating Feng, the sources said.

Shanghai party officials detained Feng at the Beijing International Airport after he had come to the capital for an meeting on October 28, 2014, the newspaper said. His wife was detained in Shanghai in February last year.

Prosecutors charged Feng with accepting over 17 million yuan in kickbacks from private companies that won supply contracts or construction projects from the Shanghai and Jiangsu branches of State Grid under his watch. He was also accused of taking another 20 million yuan in bribes together with his wife, Chen Jiali.

Feng could not explain at the trial how he got other assets worth 76 million yuan, including luxury items and a collection of antiques, the newspaper said.

The graft watchdog said in March last year that it was looking into "serious violations of party discipline and laws" – the party's euphemism for corruption – committed by Dai. They started a probe into Ai, the vice-mayor, in November.

Ai is the highest-ranking official in Shanghai's government to run afoul of corruption busters.

Several people with knowledge of the matter said that the fall of these two men were closely linked to information uncovered by investigators while questioning Feng. The party's anti-graft agency has handed the cases to the prosecutor's office in Shanghai, the sources said.

A person close to the probe into Feng said his ties to Dai went back years. It was unclear how Feng was linked to Ai.

Dai, a 54-year-old from the eastern province of Jiangsu, rose through the ranks of the Shanghai government over two decades and was named the mayor's chief of staff in February 2013.

He was made the deputy director and party secretary of the Shanghai Free- Trade Zone, which was launched as a testing ground for economic reform, in 2013. He lost that position in September 2014, days before the experiment marked its first anniversary.

Ai, 56, was the first director of the free-trade zone. He was replaced and fired from his position as vice mayor in November last year, when the government announced he was being placed under investigation on suspicion of corruption.

Dai's wife, Xue Dongmei, a property developer, won 1 billion yuan worth of contracts from State Grid to build facilities at power plants during Feng's tenure, the person close to the inquiry said. In exchange, she gave Feng a 30 million yuan villa in the city's Pudong District.

Xue was detained shortly after the anti-graft agency announced an investigation into her husband, the source said.

Prosecutors said Feng and his wife got their largest bribe – nearly 20 million yuan in cash and later another US$ 100,000, also in cash – from Li Tong, a businessman from Jiangsu who supplied cables and equipment to power companies.

Prosecutors revealed that between 2005 and 2014, Feng abused his positions as head of State Grid's subsidiaries in Jiangsu and then in Shanghai to help Li secure several supply contracts. Li gave Feng and his wife several expensive handbags and jewel-encrusted watches in addition to the generous kickbacks, prosecutors said.

In 2014, the Jiangsu branch of State Grid suspended orders to one of Li's factories, Nanjing Youlu Cable Co., due to quality concerns, prosecutors said.

Lu Yonghua, chairman of Jiangsu Linyang Electronics Co., China's largest producer of ammeters, devices used to measure the current in circuits, was also part of Feng's web of graft, prosecutors said. From 2005 to 2014, Feng received payments worth 2.8 million yuan, HK$ 2.2 million and US$ 200,000 from Lu for approving contracts to supply these instruments to the utility giant's branches in Jiangsu and Shanghai, prosecutors said.

Newspapers in Shanghai reported that Feng challenged the prosecutors' assessment of his personal assets. He said investigators overestimated his wealth by valuing antiques purchased decades ago at the prices they can fetch in the market now. Feng said this was unfair because the values rose a lot in recent years.

Feng said at the trial that his family's assets included capital gains made by selling stocks and money made by investing in wealth management products, the Labor Daily reported. He claimed his annual salary was 1 million yuan, while his wife, a manager at China Merchants Bank, earned about 2 million yuan per year.

Feng, 59, spent most of his career in state-owned utility companies. He was head of the Jiangsu branch of State Grid for two decades before being appointed the general manager of State Grid's Shanghai branch in December 2011.

Once he took over the reins in Shanghai, Feng squeezed 13 subsidiaries – through mergers and layoffs – into nine companies and stepped up power plant construction and refurbishment.

Employees at the utilities company said Feng's aggressive reforms surprised many in the industry. "There was a lot of internal opposition (to the changes)," said a former employee of one of the subsidiaries because they led to job cuts.

Feng took over the selection of suppliers and contractors from lower-level managers and had the final say in most of these decisions, said the employee.

"In the past I just thought he was a workaholic, but now I know there was profit behind it," said an engineer at Shanghai Municipal Electric Power Co. Ltd., a subsidiary of State Grid.

Many of Feng's colleagues in Shanghai described him as an aggressive leader.

"Everyone was compelled to work extra hours because of his work style," said another Shanghai Electric Power employee. "Nobody dared to leave work before he left."

But another source at State Grid said that although Feng had a few disputes with subordinates, senior executives approved of his methods because he "could always implement orders from the headquarters well."

The head office in Beijing recognized him as a model worker three times, the person said, and the All-China Federation of Trade Unions gave him a national award for his work in 2013. That same year, he was named a delegate to the National People's Congress, the country's legislature.

Feng's trial has ended and he is awaiting a court verdict.

The sources familiar with the matter did not reveal whether Feng made a deal with prosecutors to gain leniency in exchange for providing information on wrongdoing by others.