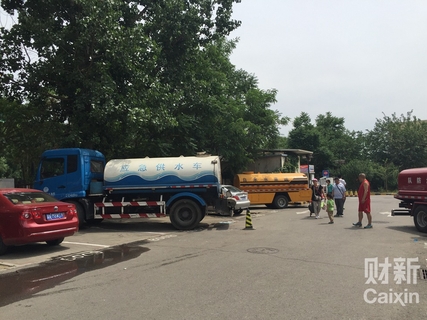 (Beijing) – More than 10,000 people in northern Beijing went two days without tap water and an unknown number were sickened after the public water system was contaminated, according to a statement released by Beijing Waterworks Group late May 25.

The state-owned water company said it was first alerted to the contamination, which was traced to a leak in pipelines sending treated waste water to homes and offices for flushing the toilets and watering plants , late May 23. Huilongguan-area residents called to report falling ill after washing with tap water.

A Hexie resident said she noticed the problem early morning May 24.

"The water looked murky and stunk like sewage,” she said, adding that no one in her family was sickened.

The water company cut service to most buildings in the area, affecting more than 10,000 residents, said the employee, who requested anonymity. Water trucks rolled into the area with emergency supplies.

Without elaborating, the water company said treated wastewater had leaked into the pipelines carrying tap water. The company did not say how many people fell ill, nor whether any were hospitalized.

Crews flushed pipelines and resumed water service late May 25 after running tests that found the water met quality standards, the company said. Residents were advised not to use the water for bathing pending a green light from health authorities.