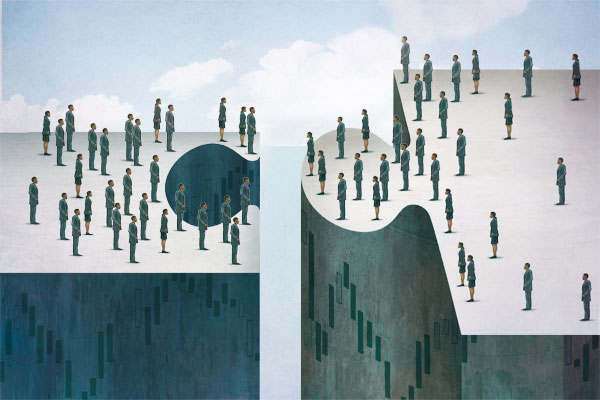 (Beijing) – Slice and sell. That's the simple formula for a business strategy popularized in recent months by Chinese fund managers whose retail investor clients are clamoring for high-yield products.

Only wealthy individuals and institutional investors with strong risk controls are generally supposed to participate in the kinds of private fundraisers being sliced and sold.

A warning shot to the nation's fund managers was fired March 25 when the Shanghai branch of the China Securities Regulatory Commission (CSRC) fined Shanghai Zhelin Equity Investment Co. 30,000 yuan for selling an interest in a private equity fund to a retail client. The client's 300,000 yuan investment for a share of private financing project fell short of the 1 million yuan legal minimum for a single investment in such projects.

A lawyer who specializes in Internet financing but who asked not to be identified said investment quota dispersal practices may be too risky for retail investors.

"If a party that transfers investment interests loses its right to an asset, retail investors who received quotas from it also will lose their investments," the lawyer said.

China's retail investors are wealthier than ever, and they're clamoring for moneymaking targets, according to Hong Lei, chairman of the Asset Management Association of China (AMAC).

"The society's wealth is surging but high-quality assets are scarce," Hong said. Thus, in hopes of high returns, "an increasing number of retail investors are being lured into the private fundraising market."

Bao Fan, chairman of the investment bank China Renaissance, said retail investors can't control risks as well as institutional investors. And because small investors lack full access to company and market information, they may be defrauded.

"Retail investors do not have risk pricing power," Bao said. "Primary market information disclosure requirements are lighter than those in the secondary market."

CSRC saw the potential for problems two years ago when it set the 1 million yuan threshold for a single investment in a private fundraising project. It also declared that a single project cannot have more than 200 investors, and that an individual investor must have more than 3 million yuan in assets or have earned more than 500,000 yuan annually during the previous three years.

Afterward, complaints about financial service firms started piling up at AMAC. Between May 2015 and last April, the association received 765 complaints and reports about irregular fundraisers that were said to have posed too much risk for retail investors – a number equal to 94 percent of all complaints filed with AMAC. Target projects included private equity investments, securities investment funds and venture capital products.

Sources close to CSRC said the regulator has been monitoring the situation and collecting data with the goal of strengthening risk controls for retail investors.

Retail investors are also at risk of losing money if changes in ownership or asset structure affect a fundraising project, especially since they may know little about behind-the-scenes deals involving a project's players.

Around the same time, though, Ping An Insurance bought a majority stake in Autohome and refused to deal with Qianyuan Mingde. An investment bank source told Caixin that Autohome's management opposes the Ping An deal and thus hindered the delisting progress.

"There are complicated interests in the deal," the banker said. "It's hard to say whether the delisting plan will continue successfully."

Qianyuan Mingde's customers can only hope for a happy outcome. "Retail investors can easily lose money… if a company fails to list," said a private equity source.

For example, some managers sell wealth management products whose portfolios include stakes in unlisted companies.

One recent offer, according to documents obtained by Caixin, involved stock-convertible bonds that were said to pay 12 percent and could be converted into equity at a 20 per cent discount during a future fundraiser. The investment target was LeSEE, the electric car unit of the Internet-focused company LeEco.

A LeEco spokesman who responded to a Caixin inquiry said the company has neither sold stakes to retail investors nor given any institution permission to do so.

Another way that fund managers appease retail clients is by offering funds tied to overseas-listed Chinese companies that plan to delist from a foreign bourse and relist on the mainland. Equity values for these kinds of companies have historically surged after a delisting overseas and a new listing at home.

A marketing document obtained by Caixin from the wealth management firm Shanghai Jupai Holdings in late March offered retail investor-sized pieces of a 200 million yuan fund attached to the artificial intelligence unit of security software developer Qihoo 360 Technology Co. The New York-listed company is now privatizing as a step toward listing on a mainland stock market.

Investors were asked to sink at least 1 million yuan each in the Qihoo asset, which Jupai said is currently worth 2.6 billion yuan. After a mainland listing, the firm said, it could be worth 10.6 billion by 2019 and thus vastly increase the value of each investor's stake. But even if the company fails to list in China, investors were promised their money back plus 10 percent per year.

In another offer, according to a salesman who spoke with Caixin on condition of anonymity, a fund product sold by Guangzhou Connerstone Capital promised investors access to a stock buyback project for iKang Healthcare Group, which plans to delist from the Nasdaq exchange and later list in China. Investors were promised returns of up to 15 percent for supporting iKang's 300 million yuan fundraiser.

Qihoo and iKang representatives who spoke with Caixin denied any plans to raise money through these respective investment plans.

However, a private equity fund source who declined to be named said companies tied to fundraising projects such as Jupai's and Connerstone's typically "will not admit" their retail investor-linked private fundraising activities because they "violate regulations for selling to retail investors."