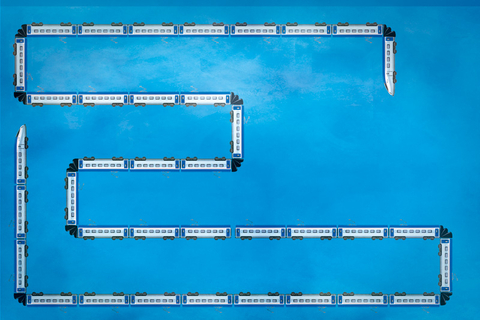 (Beijing) – China's plan to export bullet trains has hit a wall with the abrupt termination of a Chinese-American partnership that was supposed to build a high-speed rail line between a Los Angeles suburb and Las Vegas.

Railway developer XpressWest, which is controlled by the Las Vegas property developer Marnell Cos., said June 9 it had cut ties with China Railway International (U.S.) Group Ltd. (CRI), the U.S. representative of a consortium led by state rail system operator China Railway Corp. (CRC), nine months after they unveiled plans for the 298-kilometer, US$ 12.5 billion railroad.

In a statement, XpressWest said the decision was based "primarily upon difficulties associated with timely performance and CRI's challenges in obtaining required authority to proceed with required development activities." The company said it would pursue other partnerships and options along with the rail project.

In addition, XpressWest chief executive Tony Marnell criticized a U.S. government rule that says the nation's high-speed trains must be manufactured in the United States. He called the requirement "inflexible," Reuters said.

The next day, in a written reply to a Caixin query, CRC criticized XpressWest, calling its former partner "irresponsible," and arguing that it should not have released a public statement about the termination while the two companies were negotiating. It also claimed XpressWest violated their agreement by announcing the breakup unilaterally.

In a follow-up June 21, CRI Chairman Yang Zhongmin told Caixin his company is still negotiating with XpressWest because the "buy American" requirement for bullet trains would not apply to the proposed project, as no U.S. government funds would be needed.

Separately, a CRI source who declined to be named told Caixin that the project's financial terms were at the heart of a dispute between the Chinese company and XpressWest.

At home, China already operates the world's largest network of high-speed railways. But the campaign to expand abroad has met with mixed success.

A major success story unfolded in January, when Chinese companies started building a high-speed line between Indonesia's capital Jakarta and the country's third-largest city, Bandung. The 142-kilometer, US$ 5.1 billion line is expected to be completed in 2018.

Another successful contract for Chinese companies was one in Russia, where a 770-kilometer line is planned to be built between Moscow and Kazan.

But a 2013 agreement between China and Thailand for high-speed lines was derailed after nearly two years of protracted negotiations partly linked to shifting political winds in that southeast Asia country.

And the Mexican government frustrated rail builder China Railway Construction Corp. (CRCC) by awarding in 2014 but later rescinding a US$ 4.3 billion contract for a 210-kilometer line between the capital Mexico City and the city of Queretaro. The deal was scrapped after rival railroad bidders complained they didn't have enough time to prepare offers. A proposed second round of bidding was later canceled, and CRCC gave up.

A contract award for the project, which could cost between US$ 10 billion and US$ 15 billion, is expected next year. Construction is to be completed by 2022.

A CRC source said the company has been eyeing the Singapore-Kuala Lumpur project (http://english.caixin.com/2016-05-23/100946667.html) for three years as a potential hallmark for the go-abroad campaign. In May, a team of rail and bank executives led by CRC General Manager Sheng Guangzu met with Malaysian government officials in Kuala Lumpur to lobby for the project.

Even if Chinese companies win the contract, though, the project may face financial hurdles due to competition for riders from budget airlines. Moreover, the cities are linked by highways.

Malaysia's transportation authority estimated a high-speed railroad would carry about 23.7 million passengers every year. But the nation's central bank said that estimate may be too optimistic.

For example, according to a source from China Railway Group Ltd., a state-backed railway builder, the Indonesia rail project will be less lucrative than hoped. The original contract was a US$ 5.5 billion deal, but some US$ 370 million was shaved from the final agreement after "the Indonesian side apparently pushed the price down," the source said.

The Chinese side agreed to the lower price because it "was eager to clinch the deal," the source said. As a result, the Chinese companies now working in Indonesia can only expect to break even.

The string of setbacks culminating in the XpressWest announcement triggered calls among some industry experts for China's bullet train builders to re-examine their overseas strategy.

The German consultancy SCI Verkehr estimated the global market for railroads under operation was worth 162 billion euros and is likely to increase to 190 billion euros by 2018. But the firm said the high-speed portion of the market – marked by 4,883 kilometers under construction globally as of late 2013 – is worth only 18.5 billion euros.

And profit margins are thin for the builders, train suppliers and operators of high-speed railways, said Zhao Jian, an economics professor at Beijing Jiaotong University's School of Economics and Management.

Because it's hard to make a profit, he said, government subsidies were used to build and are now being tapped to cover operating costs for most of the world's existing, high-speed rail lines.

A high-speed railroad's costs are more than double those for a traditional railway, Zhao said, since the former requires dedicated track that cannot be used for freight trains.

For example, a high-speed train linking Beijing and Shanghai started turning a profit only in 2015, four years after its launch, thanks to enormous passenger volume growth. The trains now carry more than 100 million passengers a year.

But the Beijing-Shanghai line is an exception. Zhao said most of China's bullet trains, which link cities nationwide on what's now a 19,000-kilometer network of tracks, are losing money.

Many countries that considered new bullet train construction projects in recent years later backed off due to huge building and operating costs, said a CRC source who asked not to be named.

"Although many countries are interested in building high-speed railway lines, many are still at the concept stage," said the source. These countries "will not carry out the projects in the short term."

Some experts say Chinese rail companies should adjust their business strategies in order to achieve overseas expansion goals. But others caution that they should not let politics trump business.

Yao Shujie, who heads the School of Contemporary Chinese Studies at the University of Nottingham in Britain, said Chinese rail companies looking for overseas projects should not compromise economic targets in pursuit of political gain.

The Los Angeles-Las Vegas railway agreement was closed just ahead of a U.S. visit by Chinese President Xi Jinping. CRI had pledged US$ 100 million in initial project funding and planned to break ground as soon as this fall.