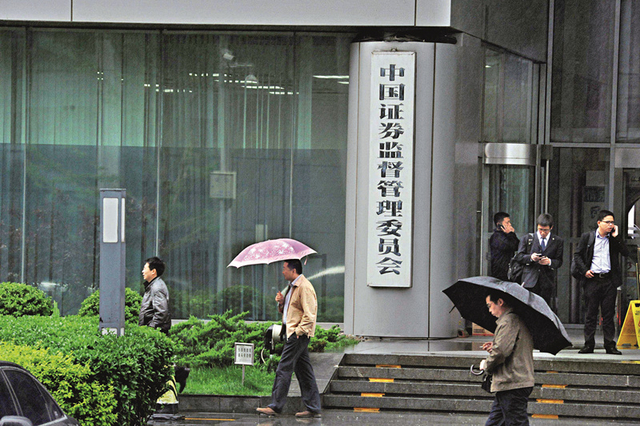 (Beijing) – In the wake of several graft scandals that brought down senior officials, the nation's securities market supervisor is taking internal staff oversight to a new and higher level.

The China Securities Regulatory Commission (CSRC) plans to raise the bar by creating a watchdog agency that, among other things, checks individual employee performance and audits top officials, Caixin learned from sources close to the commission.

The new agency will work alongside the Communist Party's anti-corruption watchdog, whose inspectors have long monitored employees at CSRC – as well as government agencies and state-run companies nationwide – and uncovered graft cases since last year that put a number of senior officials behind bars.

"CSRC wants to establish an internal accountability system" to monitor and control employee work behavior, as well as help the party's Central Commission for Discipline Inspection authorities do their job, said one source.

The securities regulator will follow in the footsteps of the People's Bank of China, which was the first financial regulator with a separate, internal unit for staff supervision to supplement party inspectors. The party watchdog alone oversees these functions at the China Banking Regulatory Commission and the China Insurance Regulatory Commission.

CSRC officials detained on corruption charges since last year include former deputy chairman Yao Gang, who used his powerful post to control public listings as well as supervise the bond and futures markets.

Police detained Yao in November, two months after the graft watchdog launched an inquiry into possible wrongdoing by Zhang Yujun), who had been serving as CSRC's assistant chairman.

When fully staffed, the new CSRC supervision department will have 16 employees working at four bureaus, according to an internal commission document, the sources said.

The new department's staffers will be responsible for pressuring employees to heed all commission directives and regulations. They'll also audit officials who hold key positions, and strive to guarantee that each commission employee follows financially responsible work habits.

Whenever there's suspicion of graft, the department's staffers will recommend any appropriate punishment to appropriate authorities. They'll also provide clean-up work after party graft inspectors wrap up their portion of an investigation.

Based on the internal document's description of its functions, one source said, the new department will wield considerable authority at CSRC. Supervision will extend to all commission offices as well as its regional divisions.

Nevertheless, the degree of power in the new CSRC department's hands will ultimately "depend on whether the 16 employees are shifted from existing departments or whether they are new hires" approved by the State Commission Office for Public Sector Reform, a staffing administrator for government agencies that answers to the Central Committee of the Communist Party, the source said.

In the fight against corruption, new hires "could make a huge difference," he added.