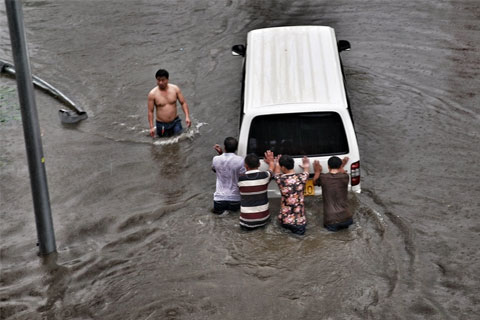 (Beijing) – At least 75 people were dead or missing as of 9 a.m. on July 20 in floods across northern China after torrential rains since Monday, the Ministry of Civil Affairs said. More than 68,000 people were displaced.

The deluge also damaged over 1,200 homes and destroyed more than 95,000 hectares of farmland, or nearly 6 percent of the size of Beijing, the ministry said. Officials estimate the disaster has cost 840 million yuan, or US$ 125 million, in direct losses to the economy.

Over 1.7 million people in six provinces in northern China, including Henan, Shanxi, Shaanxi and Gansu, were affected in one of the worst floods seen in decades, the ministry said.

Over 780 millimeters of rain fell on a rural town in Ci County in Hebei Province within 24 hours on July 18, a historic-high, resulting in six deaths, while four others were missing by the evening of July 20, local authorities said.

More than 20,000 residents were stranded when the town's power supply, mobile communication links and roads were cut off by the heavy downpour.

In central Henan Province, incessant rain pushed up water levels in three rivers near the city of Anyang beyond the flood alert level, forcing authorities to evacuate 98,000 people living in some low-lying areas in the city, provincial anti-flood authorities said.

In the capital, meteorologist said an average of 260.7 millimeters of rainfall hit downtown Beijing from 1 a.m. on July 19 to 10 p.m. on July 20. Forecasters said this exceeded the precipitation recorded during a major flood in 2012, the worst in six decades in Beijing, which killed 79 and affected 1.6 million residents. But no casualties have been reported in Beijing this year.

However, dozens of places in the capital were inundated including some low-lying areas near a bridge in Daxing District in the south and a rural village in Fangshan. Firefighters rescued at least two residents marooned in floods in these areas, including a driver who had climbed on to the top of his car that was submerged on July 19.

Fangshan, a mountainous area in the southwestern outskirts of China's sprawling capital, was the worst-hit district of Beijing, and more than 1,000 villagers were ordered to leave their homes due to the risk of landslides on July 20.

More than a dozen subway stations in the capital were also closed on that day. The Beijing international airport canceled over 237 flights as of 8 p.m. on July 20 citing bad weather.

Water authorities had issued four yellow alerts, the third highest flood warning on a four-tier color-coded alert system, for different areas in the city in less than 48 hours, as of late night on July 20.

The National Meteorological Center said heavy rains of up to 100 millimeters will return to many parts of northern China as well as regions along the Yangtze River in the south from July 24.

Areas in Southern China are just recovering from a bout of flooding in late June caused by downpours that were part of the annual monsoon season. This rainy season, however, has been one of the wettest recorded in the south in the past six decades. More than 10 regions along the Yangtze River were inundated since late June killing over 160, the Ministry of Civil Affairs said, and authorities say another 60 were missing as of July 10. The east coast was also pounded by Typhoon Nepartak, which killed over 80 in Fuzhou, the provincial capital of Fujian Province and one of the worst-hit areas, as of July 17, the city government said.