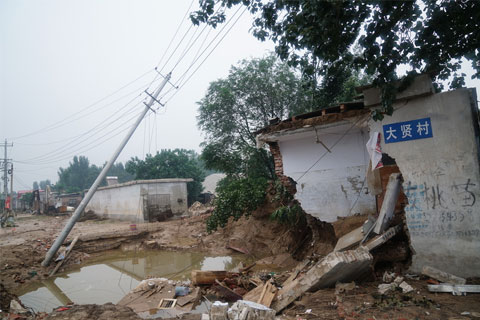 A tilted power line and a damaged home in the city of Xintai, in the northern province of Hebei, where floods killed 34

(Beijing) – Provincial authorities in Hebei said four local officials were suspended over alleged negligence in their response to the floods over the past week that killed 130 people and left 110 others unaccounted for.

The Hebei government said on July 22 in a statement that it had suspended the head of the economic zone in Xingtai – one of the worst affected cities where 34 people died and another 13 were considered missing as of July 21, after the city received over 400 millimeters of rain in four days. The party secretary of the township of Dongwang which administers Daxian Village, where nine residents were killed or went missing in a flash flood caused by a breach on a riverbank, was also suspended for "being incapable to carry out duties," the announcement said.

The chief engineer from the Municipal Bureau of Transportation in the provincial capital Shijiazhuang and a vice governor of the city's Jingxing County were also suspended pending further investigation.

Over 545 millimeters of rain fell on Jingxing County in 30 hours starting from 1 p.m. on July 19, causing a deluge that killed 26 and left another 34 missing.

Incessant rains that started on July 18 has affected over 9 million people or about 12 percent of the population in Hebei as of July 23, data from the provincial government showed. Nearly 309,000 people were displaced, while 53,000 homes were damaged, official figures showed.

Over 723,000 hectares of farmland was destroyed and the direct loss to the economy was estimated at over 16 billion yuan, according to the provincial government.

Daxian village, home to 2,000 residents, located in the Economic Development Zone in the city of Xingtai, was among the areas with the highest number of casualties. Nine residents, including five children, were killed or went missing when the village was inundated due to a breach on a bank along the Qixing River in the early hours of July 20, Caixin's investigation found.

Part of the riverbank was dug up to make way for construction workers to lay pipelines for the city's winter heating system and that caused the breach, several local villagers said.

The segment of the river that passes through the village was less than 20 meters wide and earth excavated during the digging and pipelines left in the area had obstructed the waterway, contributing to the sudden overflow, according to locals.

Some villagers also complained that they had not received a flood alert at all or the warning came too late.

"I was woken up by a roaring sound at about 2 a.m. Then I saw water gushing into my house and within a minute, the water level rose to nearly 2 meters," one villager told Caixin. "I rushed to find a ladder to climb onto the rooftop, and then I saw my car being washed away," said the man who asked not to be named.

Investigators from the provincial government are probing local officials for possible delays linked to issuing flood warnings and evacuating people from disaster prone areas. However, investigators said on July 24 that the fatal breach in Daxian village on the night of July 19 was not a man-made error and was caused by heavy downpours.

In the city of Anyang in neighboring Henan Province, floods and landslides cut off roads and telecommunication links to eight rural villages forcing rescuers to airdrop relief material to trapped villagers. Citywide, 18 were killed and another 9 went missing, while 36,000 homes were destroyed as of July 24.