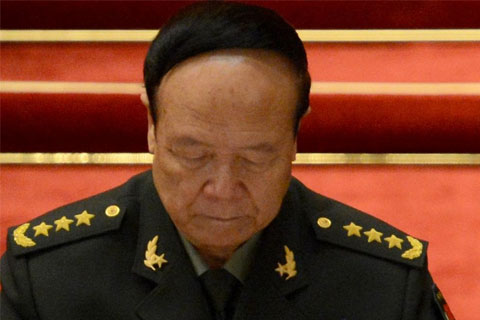 (Beijing) - A former vice chairman of the powerful Central Military Commission (CMC) of the ruling Communist Party of China was sentenced to life in jail by a military court for bribery, state-run Xinhua news agency reported on July 25.

Guo Boxiong is the highest ranking military official to fall in the anti-graft campaign launched by the party's General Secretary Xi Jinping in late 2012. Guo, 74, was also stripped of his rank as an army general for taking kickbacks involving "an extremely huge amount of money," on his own or with accomplices, in return for using his influence to help associates secure promotions, Xinhua said citing sources from the military court.

Guo was one of the two vice chairmans of the CMC who overlooked the daily operations of the Chinese military, one of the largest in the world, for eight years before he retired in late 2012. He was tried behind closed-doors because military secrets were involved, Xinhua said, but the news agency did not say when or where the trial was held.

Guo was also a former member of the party's Politburo, its top decision-making body. He was expelled from the Communist Party at the start of the graft investigation in July last year and his case was handed over to military prosecutors immediately. But he was only charged by the military prosecutor's office on May 3, Xinhua reported.

The court has confiscated all assets and proceeds deemed illegal, according to Xinhua, and Guo said he would not appeal the verdict.

Xi's campaign to weed out corrupt officials has ensnared dozens of senior military personnel, including Xu Caihou, who also served alongside Guo as the other vice chairman of the CMC from 2007 to 2012. Xu died of bladder cancer while under investigation for bribery and misusing his position. The deputy head of the army's logistics department, Gu Junshan, was also charged with corruption, misuse of state funds and abuse of power and stripped of his rank. Anti-graft watchdogs found that he owned several properties, including a home in the central province of Henan, modeled after one of the imperial palaces, the Forbidden City, and decorated with gold artworks and statues.

In a commentary published on July 25, the CPC mouthpiece People's Daily said Guo's verdict as another example highlighting the party's resolve to manage its cadre and the military strictly in accordance with its internal disciplinary rules and the country's law.

"The military, which controls the gun, should be made less of a place for the corrupted to hide," the paper said.