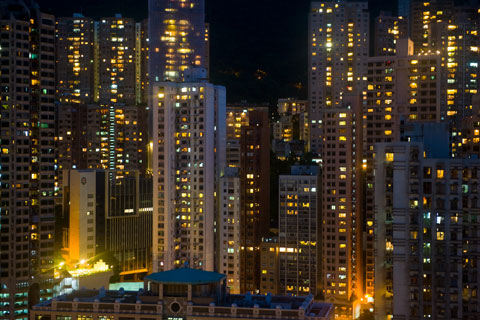 (Hong Kong) — Hong Kong's property market has made a strong comeback since the second quarter after bottoming out earlier this year, as homebuyers and developers regain confidence in the local economy.

Demand for homes in the world's most-expensive housing market was dampened earlier this year by economic worries, fueled by a mini-stock-market rout on the mainland and in Hong Kong earlier this year, and external shocks such as Britain's decision to leave the European Union, industry analysts said. But the shortage of homes — a longstanding problem in Hong Kong's housing market — has led to pent-up demand, which is now being unleashed as the economy picks up steam.

Strong demand, particularly in September, has led to some condominium projects selling out on the day they hit the market. All 300 apartments built by China Overseas Land & Investment Ltd. in its One Kai Tak project in Kowloon were sold on the first day when sales opened on Sept. 3, generating about HK$2.6 billion in revenue, the homebuilder said. The same day, eager buyers snapped up all 228 units at Sun Hung Kai Properties Ltd.'s Grand Yoho project in the northwestern New Territories.

Hundreds of homebuyers lining up outside the offices of property developers since the early hours of the day, waiting to place an order, have again become a common site. A couple poring through a pile of promotional materials while lining up outside the One Kai Tak developer's salesroom brushed aside questions from a Caixin reporter, saying, "We don't have time for an interview because we need to discuss the floor plan. The situation will get really intense once the homes go up for sale."

This urgency to buy homes is in sharp contrast to the lukewarm demand seen earlier this year.

Home sales plunged 70 percent in February from a year earlier to a 25-year low, according to the Hong Kong Land Registry. Only 1,807 homes were sold that month, fewer then when Hong Kong was rattled by SARS, or severe acute respiratory syndrome, in 2003; and during the aftermath of the 2008 global financial crisis.

Thomas Lam, head of Research & Consultancy at Knight Frank's Greater China office, attributed this drastic decline at the beginning of the year to economic uncertainty. Hong Kong's retail sales shrank 10.5 percent in the first half of the year — the worst drop in 17 years — due to fewer big-spending tourists from the mainland. Concerns that mortgage rates, linked to the U.S. Federal Reserve rate via the pegged currency, may rise also discouraged homebuyers from investing in the property market, Lam said.

The battered real estate market started to show signs of recovery in the second quarter as positive economic data allowed both home buyers and developers to drop their wait-and-see stance. The city's gross domestic product growth beat economists' estimates, rising 1.7 percent in the second quarter, the Hong Kong Census and Statistics Department reported. The city's unemployment rate rose slightly to 3.4 percent in March but has remained unchanged since then, said Alva To, senior managing director of Cushman & Wakefield. Hong Kong's unemployment rate is still lower than the mainland and developed economies such as the U.S., and the employment level is a key factor affecting the housing market, he added.

Lam at Knight Frank agrees. "As long as people still have their jobs and banks can still give out loans, there won't be a big problem in Hong Kong's real estate market," Lam said.

The home-buying fever was fueled by the U.S. Federal Reserve's decision to keep interest rates unchanged in September and the improvements in the stock exchanges. The Centa-city Leading Index reported the largest weekly growth in more than seven years at the end of September, rising 2.49 percent from Sept. 25 to Oct. 2. Income from home sales commissions hit a monthly record of HK$500 million, the brokerage said.

But at the heart of the property rebound is a supply-demand imbalance, a long existing problem plaguing the world's most-expensive housing market, said Veronica Lin, associate director of Center for Hospitality and Real Estate Research at the Chinese University of Hong Kong.

Although the government estimated that the private sector will build about 14,600 apartments on average each year from 2016 to 2020, representing an increase of about 30 percent compared with the past five years, Knight Frank estimated the supply can't meet the annual demand of at least 20,000 housing units.

Stepping up the Game

The rebound has also prompted established local property developers, who were reluctant to make high bids on land earlier this year, to get back in the game.

On Wednesday, a subsidiary of Kerry Properties Ltd., a major local developer, bought a site in Kowloon for HK$7.27 billion — the most expensive government land sale this year.

Hong Kong's biggest developer by sales, Sun Hung Kai Properties Ltd., outbid 10 other rivals with a HK$2.4 billion offer for a parcel of land in August, its first residential land acquisition since June 2015. Shares of Sun Hung Kai Properties have advanced 28 percent since the beginning of the year, compared to a 15 percent increase in the Hang Seng Property Index.

The reluctance from local real estate developers earlier this year opened up a window for mainland companies to get a foothold in the city's cutthroat property market, which is controlled by Hong Kong's richest families. In the first half of this year, mainland companies snapped up more than 40,000 square meters of residential land, a sixfold jump from a year earlier, by bidding for government tenders, according to the Hong Kong Lands Department.

Although Hong Kong firms are still the dominant players in the real estate market, mainland property developers have paid more than HK$7.4 billion dollars to acquire plots in the city this year, amounting to 18 percent of all residential land investments, government data showed.

China Vanke Co., a longtime player in Hong Kong's housing market, beat 17 firms to win a land site for HK$1.31 billion in February. A subsidiary of state-backed China Overseas Land & Investment won a residential site in the New Territories for HK$2.13 billion in the same month. The buying spree continued even as prices edged up, with Minmetals Land Ltd., controlled by state-owned Minmetals Corp., snapping up a prime site in the Kowloon district for HK$4 billion in August, according to the Lands Department, outbidding 12 developers, including Sun Hung Kai Properties.

Despite fluctuations in the real estate market in Hong Kong, cash-rich mainland property developers will continue to bid aggressively, as the yuan weakens and mainland regulators are tightening home-purchasing rules to cool an overheated market, Lam said.