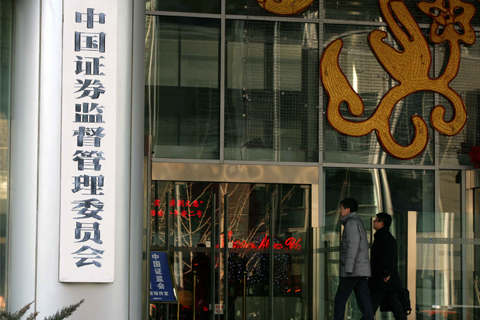 (Beijing) — Still reeling from reputational damage inflicted by the 2015 stock market crash and corruption scandals, China's securities supervisor has overhauled its front office and nailed the coffin shut on an innovative investment division.

The China Securities Regulatory Commission (CSRC) announced Oct. 11 the shuttering of its 2-year-old Department of Innovative Business Supervision amid ongoing personnel changes and the launch of a new division to oversee commission staffers.

Some staff members formerly working on innovative financing issues have already transferred to the new Department of Internal Inspection with the goal of preventing corruption and guaranteeing that rules of the CSRC as well as the party are closely followed. The new department is also auditing the personal finances of key CSRC officials.

The closed department's functions included overseeing crowd-funding equity investment activity and advising Beijing policymakers on issues surrounding new financial products and product-testing programs. These and other tasks are now being handled by various departments, according to a CSRC statement.

The CSRC shakeup began in February when Chairman Liu Shiyu, a former Agricultural Bank of China chief, replaced Xiao Gang. Several other top executives have been named in recent months.

Xiao took heat for the CSRC response to stock market corrections in the summer of 2015 that were tied to margin trading, and another dip last January.

The CSRC responded to the initial meltdown by directing government-backed stock purchases, restricting company-share sales and temporarily halting initial public offerings. In January, the commission introduced — but scrapped after just four days — a circuit-breaker mechanism that was designed to control daily volatility, but instead did the opposite.

And Xiao was at the top in November 2015 when the Communist Party's anti-corruption watchdog started investigating a commission deputy chairman, Yao Gang, at the center of the market turmoil.

Changing of the Guard

"Help wanted" signs are still hanging on several CSRC doors. Yet to be filled are top positions for at least five CSRC departments, Caixin has learned. Resignations and lateral job moves, some in connection with corruption probes, have left these slots vacant since August.

But new faces already at the top include Xuan Changneng, a former head of the central bank's Financial Stability Bureau, who on Sept. 8 was named CSRC's assistant chairman in charge of IPO supervision. Xuan replaced Zhang Yujun, who was ousted after being accused of corruption.

Among those submitting resignations in recent weeks was Deng Bin, who quit his post as CSRC director of international affairs to become vice general manager of a sovereign wealth fund, China Investment Corp. Sources told Caixin the new international affairs chief may be Jiang Feng, who recently joined CSRC after serving as a chairman of ABC International, an investment banking subsidiary tied to Agricultural Bank of China.

Also stepping down recently was Hou Wailin, who headed the commission's legal enforcement task force. He's now chairman of the state-owned investment firm Guangzhou Technology Financial Group. Liang Yongsheng, former director of the Department of Fund and Intermediary Supervision, has been transferred to the CSRC's bureau in Jiangsu province as director.

Also waiting for new chiefs to be named are the Department of Public Offering Supervision, which was seriously rattled by the Xiao-related investigations, and the Department of Listed Company Supervision. High-level vacancies are also hampering nine of the public offering department's bureaus.

Some offices are suffering from a lack of personnel, according to a source in the public offering department who asked not to be named. "Over the past year, some in this department have been probed, while others left, leaving almost no one to do these jobs," the source said.

The new staff policing department is headed by Shi Zhenqiang, who formerly served as vice chairman of the Hubei province division of the National Development and Reform Commission. When fully staffed, Shi's unit is expected to have 16 employees working in four bureaus, the CSRC said.

In addition to overseeing the changing of the guard, CSRC chief Liu has called for the commission and other financial system regulators to more effectively coordinate their efforts. He thinks they should work together to control risks and encourage the markets to serve the real economy.

Meanwhile, Liu said in a recent speech, the commission will take a strict approach toward supervising China's stock markets.

CSRC, which was established in 1992, is a pillar of China's financial supervision framework. Other mainstays are the central bank, a banking supervisor, and an insurance regulator.