By Bao Zhiming and Saga McFarland 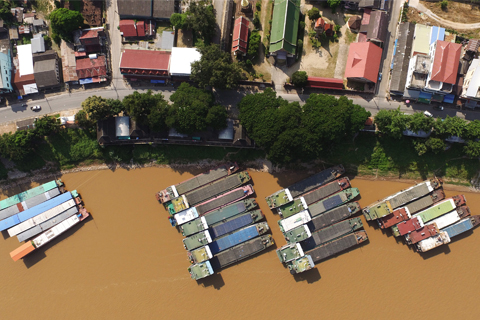 Dozens of boats are berthed at Chiang Saen port in Thailand on Oct. 19. Many boats had to wait at least a month for goods as trade was slow. Photos: Yang Lü

In late October, the weather is still scorching-hot in northern Thailand's Chiang Saen Port. The chief engineer on a Chinese cargo vessel and his crew wait out the heat with a game of mahjong. The ship plies its trade ferrying goods along the Mekong, but it has been over three months since the engineer last revved up the engine on his ship. Until he can fill his vessel with enough goods, he and his crew remain stranded.

"In the past, we waited at most a week," he said. "Now we've already waited for over three months and we still don't know when we will be able to leave."

China's latest action blockbuster, Operation Mekong, has captivated audiences with its portrayal of a booming aquatic trade route plagued by pirates and drug smuggling. Released last month, it chronicles the true story of the massacre of 13 Chinese cargo ship crew members in Myanmarese waters in 2011.

But today, the real picture of Mekong trade is anything but action-packed. An alternative land route, Chinese efforts to curb the upstream smuggling of frozen-meat products, and government restrictions on the export of wood and stone in Myanmar and Laos have brought the river's shipping trade to a screeching halt.

Originating in China's Qinghai province, the Mekong runs through Myanmar, Laos, Thailand, Cambodia, and Vietnam before emptying into the South China Sea. In the 1990s, the 260-km stretch of river linking Yunnan province's Xishuangbanna to Chiang Saen Port became one of the main trade routes connecting the booming Chinese and Thai economies.

Beginning in 1992, Yunnan's state-owned shipping companies began recruiting sailors to develop trade along the new route. Besides geological challenges like treacherous beaches and a long dry season, the river also snakes through the notorious opium-producing Golden Triangle area, where the mountains of Laos, Thailand and Myanmar converge. The waters teemed with illicit drug trafficking, and no official trade procedures existed to regulate the growing shipping business.

But in April 2000, China, Thailand, Myanmar and Laos signed an agreement designating the stretch of river from Simao Port in China to Luang Prabang in Laos as international open waters, legitimizing the already booming shipping industry.

And in 2004, China invested in developing the trade route even further, launching the Mekong waterway regulation project. Completed in 2008, it allowed the river to accommodate ships with a capacity of up to 350 tons.

In the years that followed, the river bustled with activity. The freight volume passing through Xishuangbanna nearly doubled in five years, from less than 100,000 tons in 2004 to 190,000 in 2008. In 2009 it reached 200,000 tons, according to Xishuangbanna's port statistics.

But as trade boomed, the security situation on the river was still fraught with peril. On Oct. 5, 2011, gunmen deployed by Myanmarese drug lord Naw Kham stormed two Chinese cargo vessels, slaughtering all 13 crew members. Following the massacre, on which Operation Mekong is based, China ordered its nationals to cease all trade operations on the Mekong. Two months later, the four countries trading along the river launched a joint law enforcement patrol.

Security was largely restored and trade resumed. No hijackings have occurred since Naw Kham's arrest and the collapse of his drug trafficking ring in 2012. In 2014, Xishuangbanna's freight volume showed signs of recovering, increasing to 156,000 tons from a low of 110,000 in 2012.

But any illusions of a recovery were shattered beginning in 2015, when Xishuangbanna's freight volume plummeted to 71,000 tons, less than half of what it was a year earlier. During the first 10 months of this year, only 65,000 tons have passed through the city. The sudden sharp decline of goods transported along the route has left many ships stuck waiting in foreign ports.

Twenty-four Chinese ships with 130 crew members were stuck waiting for cargo when Caixin visited Chiang Saen Port. Some had been there for over five months.

Not long ago, two ships left Yunnan's port city every day, according to Captain Dong, who has been sailing the Mekong for 22 years. Now, only one ship per week sets sail downstream.

The drastic decline of trade along the Mekong can be traced to a bridge connecting its Thai and Laotian shores. In December 2013, construction on the bridge connecting the two countries was completed. It represented the last section of a direct motorway linking Yunnan's Kunming to Bangkok.

Shorter transit times—it takes around a day and a half for trucks to travel between China and Thailand—and a lower risk of damaged goods have made the land route an attractive alternative to the Mekong.

Since 2014, nearly all fruits and vegetables traded between China and Thailand have traveled by land. The total volume of goods passing through the motorway's Mohan port in Yunnan more than doubled from just over 1 million items in 2013 to more than 2.5 million in 2015.

It hasn't helped that the trade of less-perishable goods has been increasingly restricted. In 2012, Yunnan customs began cracking down on the underground trade of frozen meat products. Upstream trade from Thailand to China essentially disappeared, a trader surnamed Li told Caixin.

Recent restrictions on the export of wood and stone by Myanmarese and Laotian governments in response to a dwindling supply of natural resources have reduced trade even further.

And more alternative trade routes are coming. Construction on a railway connecting Thailand and China kicked off in December 2015 and is expected to be completed in the next two years. The Chinese cargo ship engineer, who has been sailing the Mekong for 15 years, sees the railway as the final nail in the coffin of trade on the Mekong.

But Xishuangbanna is making one last-ditch effort to save its dying port. The local government is in the process of building a sprawling meat inspection facility just 500 meters north of the city's port. It is expected to begin operating in January.

Yunnan is trying to legalize the black-market meat imports that have been the subject of anti-smuggling crackdowns. The province will allow 2 million tons of frozen meat products to pass through the city each year, a local customs official told Caixin.

Once the facility is operational, the only way to import frozen meat products legally from downstream countries into Yunnan will be via the Mekong—products traveling by land will not be able to get the official import certification the facility will offer.

Since the crackdown on illegal meat imports dealt a heavy blow to shipping on the river, the local government hopes legalizing the imports will help revive the port's shipping business.

In the beginning, it is unlikely the city will be able to process the allocated 2 million tons of meat due to the limited capacity of its existing port. But another port is already in the pipeline. While it is unclear when this project will be completed, the expanded capacity may allow them to reach their 2-million-ton target in the future.

The city will have to wait until next year to see if the facility will attract enough revenue to revitalize the Mekong's stagnant shipping industry. But the same customs official who told Caixin about the facility is optimistic. The seal of approval from Chinese customs officials is likely to convince exporters to choose shipping on the Mekong over road or rail routes.

"When the previously illegal imports are legalized, the shipping on the Mekong will once again be spectacular," he said.