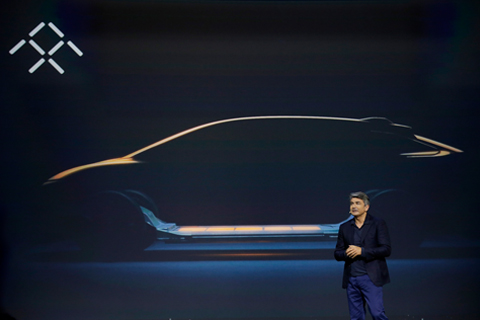 (Nevada) — Construction at the Nevada factory of electric-car startup Faraday Future has ground to a "temporary" halt, with the company owing millions in unpaid bills to a major contractor.

Faraday Future, backed by Chinese billionaire Jia Yueting, said in a statement on Wednesday that construction of the $1 billion, 280,000-square-meter plant in the western U.S. state has been temporarily suspended.

The first phase of construction has been completed, with the second phase due to start in February, the startup said.

But a letter from the project's main contractor, Aecom, that urged the company to pay up showed Faraday Future owed over $21 million as of September. The letter was published in the trade newspaper Automotive News last month.

Nevada state Treasurer Dan Schwartz told Caixin that the factory site in the city of North Las Vegas was in fact still an empty plot of land that has been sitting idle for months.

"You can see there are some fences," but there was barely anything else built on the site after the groundbreaking ceremony in April, Schwartz said.

In December, Nevada Governor Brian Sandoval pushed the state Legislature to pass a $335 million incentive package for Faraday, including $175 million in infrastructure bonds. Schwartz, a vocal critic of the deal, said he was pessimistic about the ability of Faraday's major investor, the Chinese conglomerate LeEco, to fund the project.

LeEco is facing increasing investor scrutiny over its ability to finance its ambitious investment plans. In an internal email earlier this month, company CEO Jia admitted to employees that LeEco has been expanding far beyond its means.

In addition to the Faraday Future factory, LeEco's investments over the past two years include a $2 billion takeover of U.S. flat-screen television maker Vizio Inc., and the 2.7 billion yuan ($394 million) purchase of exclusive new media broadcast rights for the Chinese Super League.

Schwartz also suspects that the design process of LeEco and Faraday Future's electric cars may have stalled due to technical problems. "I think Jia is somewhat idealistic," Schwartz told Caixin. But idealism alone won't build a car, he said.