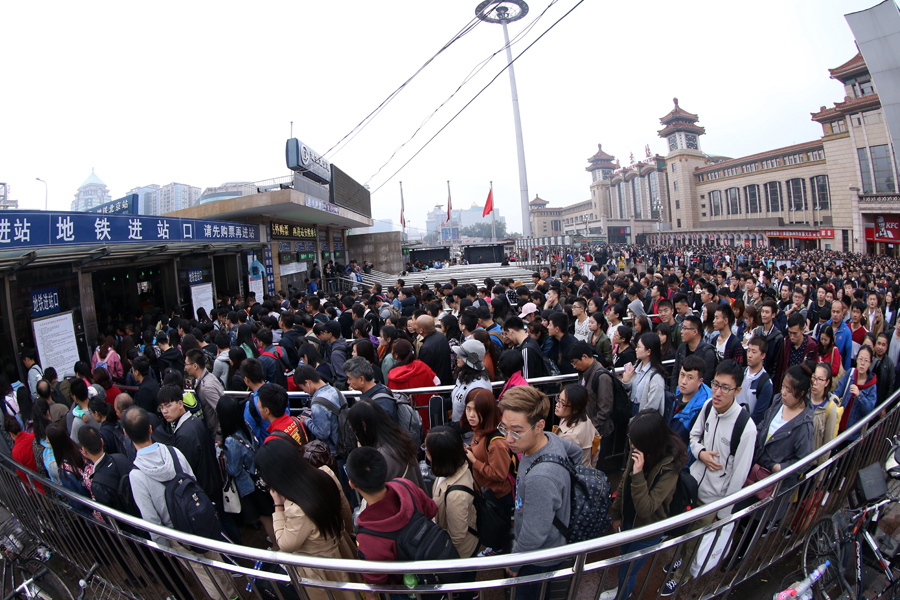 People crowd the entrance to the subway station outside the Beijing Railway Station on Oct. 7, the last day of the seven-day national holiday. Photo: Visual China

(Beijing) — Attempts by Beijing city authorities to reduce the population in the city's six bustling downtown districts have failed to meet annual targets despite the relocation of dozens of markets and the shuttering of hundreds of schools for migrant children.

Official records show that the number of residents in the capital's six overcrowded central districts in the first nine months fell by 96,000, one-fourth the annual target, Lu Yan, head of the Beijing Municipal Commission for Development and Reform, told The Beijing News.

Authorities have tried to push out low-income migrant workers from the city center as part of its efforts to cap the Chinese capital's population at 23 million residents by 2020.

The clampdown on migrants started in 2014 with the relocation of dozens of retail and wholesale markets, where traders sold clothes and household items at steep discounts, to the fringes of the city or to bordering Hebei province.

Authorities have also made it harder for migrant children to find a school in the city.

Education authorities in the past year have closed hundreds of schools attended by children of construction workers, roadside food sellers and other low-skilled migrant workers.

But a recent study by Dr. Song Yinquan at Peking University's China Institute for Educational Finance Research found that 70% of migrant children whose schools were shut down chose to stay in Beijing with their parents even though they had no place to study.

The city also pushed up requirements for migrant children to enter public schools in late 2014. Earlier, migrant parents were required to provide five documents, including employment contracts and a local residence permit, to admit a child to a public school.

But several parents interviewed by Caixin complained that since last year, public schools have introduced new restrictions and were asking for nearly 20 documents. For example, a migrant family living in Dongcheng, a popular school district, have to prove that both parents have a full-time job in Beijing and that at least one was employed in the district, a parent said.

Several families from outside Beijing, surviving on temporary jobs, told Caixin that they registered a fake business, exploiting loopholes in the city's lax business registration law to get a fake job contract that they could show school-admission panels.

"We'll do whatever we can as long as our children can go to school," one parents said.

Education authorities have also told higher-education institutions to cut enrollment quotas for students from outside the capital. As a result, Beijing Modern Vocational School in Dongcheng district, which earlier offered 40% of its places to students from migrant families, has reduced the number of students it admitted from 200 to 60 from 2012 to 2015, a school administrator said.

All 89 universities in Beijing have been told to freeze enrollment for the next five years. City officials have ordered some colleges to build new campuses in the outskirts of Beijing and even in neighboring Hebei province and relocate their undergraduate programs there.

The forced relocation might undermine the teaching and research quality at universities by making it harder for them to attract top talent, said Zhao Hong, vice director of the Beijing Academy of Social Sciences.

While the government's ham-fisted measures have not pushed out rural migrants already in the capital, it may have deterred others from moving in.

Beijing's population growth slowed to 0.5% in the first three quarters, Lu told The Beijing News. This represented an increase of 98,000 people, well below the average annual target of 260,000 new residents that was set for the next five years.

Beijing had 21.75 million permanent residents — those who have lived and worked in the capital for at least six months, according to official statistics.

And it was well on its way to meeting the 2020 target of reining in the population to 23 million, Lu said.

The city government also plans to move most municipal government agencies to Tongzhou district in the outskirts of the capital next year, which will result in 1 million civil servants moving out of downtown Beijing.