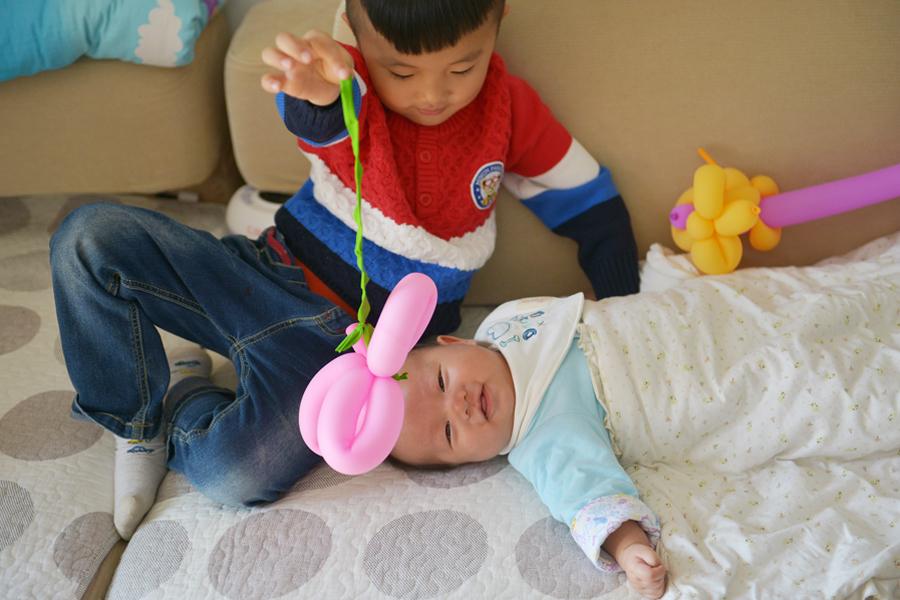 A boy plays with his little brother, who was born after China abolished its one-child policy in 2015. Photo: Visual China

The number of children born in China this year is set to rise by 5.7% compared to 2015 as a result of the introduction of the country’s new two-child policy in 2015, according to National Health and Family Planning Commission (NHFPC) deputy director Wang Pei’an.

Wang, speaking at a China Population and Development Research Center (CPDRC) forum on Saturday, said that an estimated 17.5 million babies will have been born in China by the end of 2016, about 950,000 more than last year. Wang believes the annual number of births could reach 20 million in the near future, causing China’s population grow to 1.45 billion by 2030.

In October 2015, the Communist Party of China's 18th Central Committee decided to abolish the country's longstanding one-child policy and roll out a universal two-child policy.

Most families were previously allowed to have just one child, although some families, such as those in which both parents were from single-child families, were allowed to have a second child. 2016 is the first full year that the universal two-child policy has been in effect.

According to NHFPC data published in September, the total number of births in China during the first half of 2016 increased year-on-year by 6.9%. Second children made up more than 40% of births during this period.

Wang estimates that from 2016 to 2020, China's totally fertility rate (TFR) will fluctuate around a midpoint of 1.8. The TFR measures the number of children the average woman will have over the course of her lifetime if she lives through her childbearing years.

The China Statistical Yearbook 2016, published in October by the National Bureau of Statistics, said that China's total fertility rate in 2015 was only 1.05. The bureau said China's average annual TFR from 2010 to 2014 was only 1.2, and the highest TFR in this period was only 1.28.

Huang said that China's number of births will only "increase slightly," and that the effect of the two-child policy should not be overestimated.