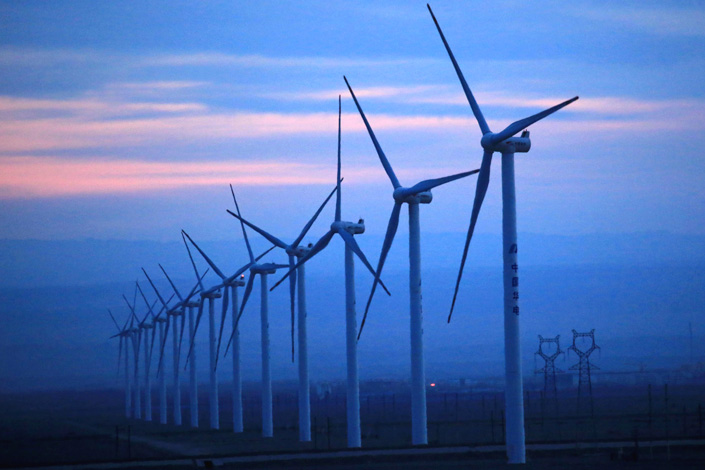 (Beijing) — Apple Inc. has bought a 30% stake in four wind power projects in China as the U.S. tech giant moves to minimize its carbon footprint in the country where most of its products are made.

China's biggest wind turbine manufacturer, Xinjiang Goldwind Science & Technology Co., announced Wednesday that Apple had acquired the stake in four of its wholly owned wind plants. The joint venture will also explore the possibility of selling wind energy directly to end users. The total capacity of these plants was not disclosed.

"This is an image booster for both companies," says Zhou Yiyi, an analyst at Bloomberg New Energy Finance. "It will indirectly offset Apple's carbon footprint linked to manufacturing in China through offsite power generation, as well as benefit Goldwind's exports."

The iPhone maker, which powers its electricity-hungry data centers and U.S. operations with renewable energy, has been seeking ways to green up its supply chain in China since last year. In April 2015, Apple formed a joint venture with Chinese solar company SunPower Corp. to build two sprawling solar farms in Sichuan province. Apple proceeded in November 2015 to set up another three solar plants jointly with SunPower in the Inner Mongolia region.

"China is quite an attractive place to set up offsite renewable energy plants. The government here is especially driven to curb carbon emissions, given the air pollution situation," says Alex Shoer, the CEO of seeder, a solar development firm. He said that setting up clean energy generation units where products are made is a natural move, as users were concerned about the environmental impact of manufacturing.

More than 70% of greenhouse gases produced by Apple comes from its manufacturing units, and a single factory in central China's Zhengzhou produces over 70% of iPhones. Apple announced a plan to expand its clean energy investments in China last year. The company also said its offices and stores in China were carbon-neutral after the completion of a solar power plant in Sichuan.