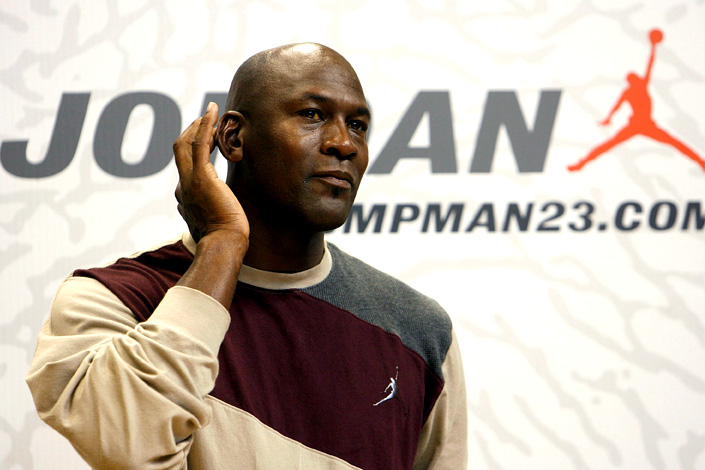 (Beijing) — China's highest court Thursday ruled in favor of American basketball icon Michael Jordan in a milestone trademark dispute against a sporting goods company that capitalized on a Chinese version of his name.

The Supreme People's Court ruled the company's brand name violated Jordan's rights to his personal name and ordered the Trademark Review and Adjudication Board (TRAB), which had backed Qiaodan, to review its decision.

The ruling might interrupt Qiaodan's latest plan for an initial public offering (IPO) in Shanghai. Its first IPO attempt was scuttled when Jordan filed his initial lawsuit in 2012.

Qiaodan did not suffer a total defeat: The court said the company could continue using versions of the brand name in Pinyin, the nation's official system of transliterating Chinese characters into the Latin alphabet. Pinyin usage in this case is legal, Chief Justice Tao Kaiyuan said.

Jordan, whose net worth has been valued by Forbes magazine at $1.24 billion, defended his name in light of a personal contract with sports gear manufacturer Nike Inc., which makes Air Jordan shoes. The former basketball star currently is the principal owner and chairman of the National Basketball Association's Charlotte Hornets team.

Jordan said in a statement to U.S. media: "Chinese consumers deserve to know that Qiaodan Sports and its products have no connection to me. Nothing is more important than protecting your own name, and today's decision shows the importance of that principle."

In a statement released on Chinese social media, Qiaodan said it respected the court's decision and will obey intellectual property laws. The statement also noted that Qiaodan differentiates its brand from Air Jordan shoes by adding the phrase "(Chinese) national brand" in advertising and marketing campaigns.

The NBA legend started fighting for his name rights in 2012 by demanding TRAB ban the disputed brand name. The board rejected the request, prompting Jordan to file lawsuits in two courts in Beijing.

Each court upheld TRAB's decision and rejected Jordan's demand for monetary damages, ruling that Jordan is an ordinary U.S. surname that can be used by Chinese companies.

Still, Qiaodan has paid a price as the dispute forced it to scrap plans for an IPO on the Shanghai Stock Exchange. Later, in 2013, Qiaodan sued Jordan for $8 million on grounds that he had blocked the IPO. That case is still in the courts.

In 2014, the China Securities Regulatory Commission said an unspecified "unsettled dispute" was behind its decision to reject Qiaodan's IPO request. But according to a CSRC document filed earlier this year, the regulator has since then approved the IPO, but the official regulations said that a lawsuit could halt the process.

Founded in 2000 in the city of Quanzhou, Qiaodan expanded quickly on the basis of the name familiar in China, where American basketball is popular. The company's revenues surged 50% annually between 2008 and 2010, according to a prospectus filed with the securities regulator in 2011.

The company and its affiliated firms have registered with TRAB other Chinese-language trademarks using sound-like versions of the Los Angeles Lakers and the names of Jordan's sons, Jeffrey Jordan and Marcus Jordan.

Jordan is not the only U.S. basketball star whose name has been used by Chinese companies seeking recognition among consumers.