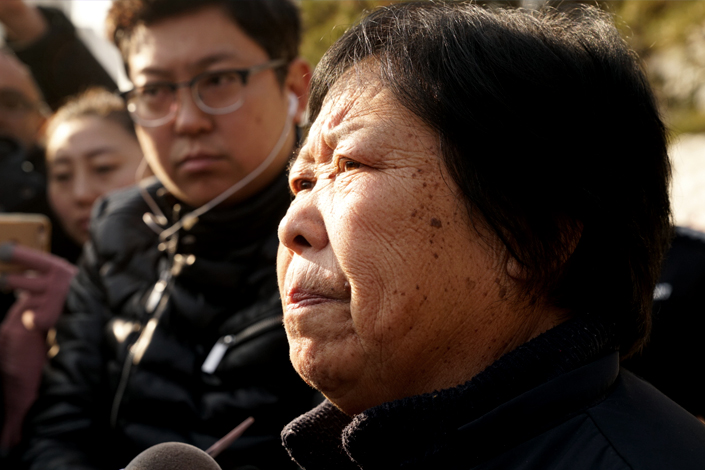 Zhang Huanzhi, the mother of Nie Shubin, who was sentenced to death and executed 21 years ago, talks to the media after her son was found not guilty by the Supreme People's Court on Friday. Photo: Guo Xianzhong/Caixin

(Beijing) — More than two decades after a young man from north China's Hebei province was executed for rape and murder, the Supreme People's Court overturned his conviction on Friday in a landmark case that has exposed flaws in China's criminal justice system.

The court concluded Nie Shubin's original trial 21 years ago lacked "sufficient evidence," saying there were serious inconsistencies between Nie's confession and evidence presented over the time of death, the murder weapon and the cause of death, court paper shows.

The case has become one of the most widely cited examples of how police torture and judges' turning a blind eye to coerced confessions has led to wrongful convictions.

Nie was executed in 1995 after being convicted of raping and killing a woman in a cornfield near the provincial capital, Shijiazhuang. Nie was tortured while in police custody, Li Shuting, the lawyer representing his family, told Caixin in June. Nie was executed two days after a court in Shijiazhuang rejected his second appeal.

Fresh evidence emerged in 2005 when another man, Wang Shujin, confessed to the same crime. Wang was later found guilty and is now on death row pending a review of his sentence by the Supreme People's Court.

Nie's family had demanded a retrial since 2007. But the top court did not order a new hearing until June.

The case "is obviously a wrongful conviction with little complexity, but it has taken more than 10 years to get a retrial due to delays by officials in Hebei," Li said during the June interview.

The retrial came after the case was reopened in December 2014, and a court in Shandong province found that due process wasn't followed in Nie's original trial.

Nie's mother, Zhang Huanzhi, who spent years submitting petitions to different judicial organs pushing for a review of the case, told reporters on Friday: "The first thing I'll do when I return home is to go to the small shrine I have made for my son and tell him that he is cleared of all the charges because of the efforts of his loved ones and progress seen in our legal system."

In a similar case in 2014, a court in Inner Mongolia said an 18-year-old man named Huugjilt, executed by firing squad in 1996 after being convicted of rape and murder, was innocent. The accused was tortured into making a confession, authorities said, and the police officer who led the investigation was jailed for corruption in October.