By Yuan Suwen and Li Sijia 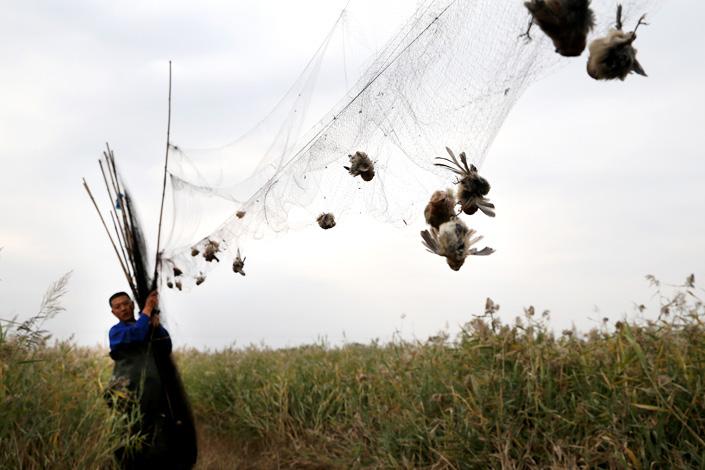 With the arrival of winter in the Northern Hemisphere, 1 billion birds are migrating or have migrated to warmer climates. Nearly a quarter of them were expected to pass through China as part of their journey.

In recent years, however, much of the country has become a treacherous place to fly for the 1,300 species of birds passing through. Once inside China's borders, many of them fall prey to poachers who supply the country's thriving underground wildlife trade.

In early October, animal rights volunteers dismantled more than 20,000 meters of bird nets near the northern cities of Tianjin and neighboring Tangshan, Hebei province. More than 5,000 dead birds were caught in the traps. Later that month, 233 swans and 26 mallards were found dead in Inner Mongolia's Hongtu Lake, also known as "Swan Lake." The birds were found to contain traces of carbofuran, an agricultural pesticide that poachers use to kill birds they later sell for food.

China's demand for migratory birds, whether for meat, Chinese medicine or gambling fights, is not new. But the scale of the current underground trade has put many species on a path toward endangerment, or even extinction.

The State Forestry Administration is currently in the middle of a national crackdown on poaching nets in the countryside. The "net-clearing operation" also aims to clamp down on all aspects of the thriving illegal trade, including transportation and sales.

Still, the trade flourishes. Legal loopholes, lenient penalties and regulators who lack expertise and enforcement jurisdiction have failed to deter poachers and traders.

Even if the birds can manage to elude capture, they are left searching in vain for rest spots that no longer exist. Rapid construction and development have reduced their habitats in China by nearly 80% in just a few decades.

In the rural areas of Shandong province's Shen county, or Shenxian, bird nets cascade from the roofs of houses down into the adjoining wheat fields. Next to the nets, loudspeakers project quail calls to lure birds in.

Liu Yidan, a volunteer at an animal rights organization called Let Migratory Birds Fly, hadn't expected to stop here. She was on her way to the nearby wetlands, a known rest stop for migratory waterfowl, when she saw the nets. Apparently, news of the ban on netting birds hadn't reached Shenxian. After reporting the illegal nets, Liu and local forestry officials took down nearly 8,000 meters of nets.

"Many people told us that no one had ever told them not to put up bird nets," Liu said. "No one had told them that catching and selling birds was illegal."

In this relatively affluent county, the local thrushes are valued for their mild calls, and quail fighting is a local tradition. The thrush cannot be artificially bred, and the quail is a migratory bird, arriving in China each winter from Siberia.

Trading in the birds requires virtually no investment besides the net, and the work can be very profitable. At the local market, a male quail can fetch up to 30 yuan ($4.35), and depending on the quality of their songs, thrushes can sell for over 100 yuan each. The local farmers catch about 75 birds per day in their nets, and up to 200 on a good day, according to an investigation by Liu and other volunteers.

But the scope of China's illegal bird trade goes way beyond small markets trading in the local catches. On Nov. 16, forestry officials in the Guangxi region identified four underground wholesale dens trading in migratory birds in Pingle county. One of them was in an abandoned school building.

As part of the raid, they discovered more than 30,000 live chestnut and chestnut-eared buntings, migratory birds that come from Siberia to Guangxi's Guilin each winter. Frozen specimens, including some Class 2 protected owls, were also found. A volunteer who helped lead authorities to the warehouses saw refrigerator trucks with Guangdong province license plates at the scene. The volunteer thinks the birds were being trafficked to Guangdong to be eaten.

China's appetite for wild-bird meat has already pushed some species to near-extinction. In 2004, the yellow-breasted bunting, a small bird that migrates each year between northern Europe and Southeast Asia, was considered a "species of least concern" by the International Union for the Conservation of Nature (IUCN). But prized in China for its fatty meat and supposed nutritional value, the bunting has been the target of rampant hunting. Since 1980, the global population has decreased by 90%, and in 2012 it was officially declared endangered by the IUCN, and hunting it was banned.

Beijing veterinarian Ren Pu recalled seeing more than 600 yellow-breasted buntings killed and sold when visiting a bird market in Tianjin over a decade ago.

"Now there is less and less of this," he said. "In the early 2000s, you could find all kinds of wild-bird meat in Beijing's private clubs, including swan and even great bustard." Known in China as the "flying pandas," the great bustard is the world's heaviest flying bird and a Class 1 protected animal in China.

Even the increasing awareness and sympathy for the plight of wild birds has been exploited for business gain. Some merchants coerce animal rights volunteers into buying the merchants' supply to save the animals' lives. Liu Yidan has personally spent millions of yuan buying wild birds from dealers in order to save them. Even on her trip to Shenxian, she couldn't help but buy 45 thrushes at the local market.

Every weekend in Beijing, the more than 20 illegal bird markets highlighted on a Let Migratory Birds Fly map bustle with activity. On Nov. 12, with the national "net-clearing operation" underway, many have closed their doors. But illegal sales persist in nearby alleyways.

After discovering a shop selling a variety of protected species, a Beijing volunteer from the organization who asked not to be named called the Forestry Department to report the violation. Four hours later, officials show up. They can't identify the species of the birds, and only after the volunteer's help in doing so do they confiscate some of the protected birds. They do not issue a fine or punishment, saying that the shop is operating an illegal business, which is outside their jurisdiction and regulated by the Business Administration Department.

Liu Yidan encountered the same thing in Shandong. The Forestry Department could punish only poaching. Once at the market, sellers could avoid punishment simply by denying any poaching activity.

Liu and the volunteers' experiences can be explained by gaps in China's legal framework for regulating the wild-bird trade. Most of the migratory birds that are hunted are classified as Level 3 protected animals, a category that includes animals that are beneficial and have economic and scientific research value. The hunting of Level 3 animals is considered criminal under Chinese law only when over 30 animals are hunted. Furthermore, no specific laws address their breeding or sale. The result is that only very-large-scale cases are penalized.

"It is really difficult to find a basis for punishment," according to Zhou Haixiang, director of the Ecology and Environment Research Office at the Shenyang University of Science and Technology. He said that the mere possession of protected animals should be criminalized. This way, prosecution can occur no matter at what level of the supply chain the animals are discovered.

But even if China were able to put a dent in the wild-bird trade and save its avian migrants from death at the hands of poachers, human activity on migration routes is in itself a threat to survival.

Of the eight main avian migration routes, three pass through China. The most threatened is the East Asian-Australasian Flyway, on which migratory birds travel north from Australia, New Zealand and the Western Pacific islands through China's most densely populated eastern coastal provinces.

During the journey, the birds inhabit the muddy beaches of China's coastal wetlands. But studies have shown that more than 60% of the country's natural coastal wetlands have disappeared in the last 50 years. From 2006 to 2010, an average of nearly 100,000 acres of coastal wetlands were encroached upon each year to build industrial zones, ports, and other coastal infrastructure projects.

And demand for the land shows no sign of stopping. According to the latest coastal development plans, there is a need to reclaim more than 1.4 million acres of wetlands in order to meet demand.

If loopholes like these stay on the books, China will remain unable to protect the migratory birds within its borders.