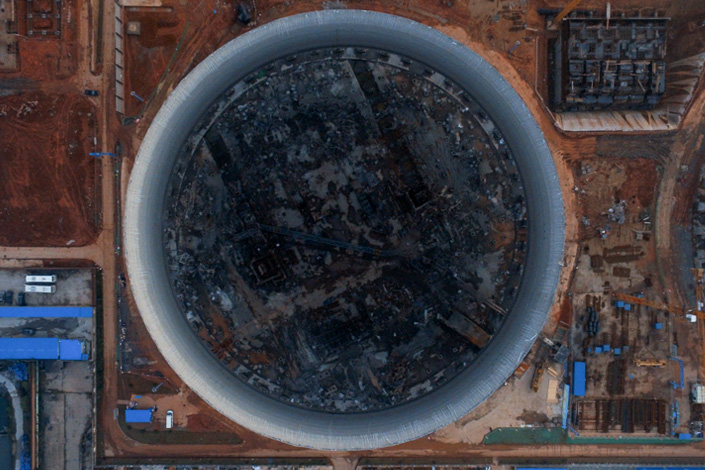 (Fengcheng) — The construction site in Jiangxi province where scaffolding collapsed in late November, killing 74, was covered in red confetti from firecrackers that had been lit by survivors to mourn the worst industrial accidents in China this year.

Four workers burned fake money in memory of their dead colleagues, three days after a construction platform attached to a cooling tower at a power plant in Fengcheng collapsed on Nov. 24.

The site looked like a dismantled circus ring, with the scorched red scraps of paper from the firecrackers mixed with the muted colors of the brown earth and gray concrete.

The deaths have again put the spotlight on China's grim record on industrial safety.

Lax safety standards at work sites across the country have led to a string of major work-safety accidents in recent years. Many have been blamed on weak regulatory oversight, systemic corruption, and pressure to complete construction or boost production under tight schedules.

In the first half of 2016, over 14,000 people died in work-related accidents, Yang Huanning, director of the State Administration of Work Safety, said in July. Though this is 5.5% fewer than in the same period last year, construction, mining and other labor-intensive industries remain death traps.

The government response to the latest tragedy was swift. A high-level investigation team was formed by the State Council, China's cabinet, following instructions from President Xi Jinping and Premier Li Keqiang. Nine executives have been arrested in connection with the incident.

While preliminary findings showed that poor management and a rushed schedule contributed to the accident, investigators are still piecing together what exactly went wrong on that fateful morning.

Day of the Disaster

It was early dawn when the steel workers trooped into the Fengcheng power plant on the day of the disaster.

By 5:10 a.m., the steel workers were already on a platform 70 meters in the air tying steel inside cooling tower No. 7.

At about 7:30 a.m., that same platform would collapse.

The tower was part of two new 1,000-megawatt (MW) power generation units being added to the power plant, which was 8 km from Fengcheng's city center. The coal-fired power generator could already produce over 2,500 MW a day.

The expansion was funded by the Jiangxi Gan Energy Co., Ltd. with a total investment of 7.67 billion yuan ($1.1 billion). But a large chunk of the construction was contracted out to Zhongnan Electric Power Design Institute Co. Ltd., with which Gan Energy had signed an engineering, procurement and construction agreement worth 2.99 billion yuan. Construction workers on the ground came from four different construction companies.

Hebei Yineng Tower Engineering Company (Yineng) supplied the workers for the No. 7 cooling tower. The subcontractor, based in Handan, Hebei province, has built more than 190 cooling towers in over 22 Chinese provinces and foreign countries, including Morocco, Pakistan, India and Russia, since its founding in 1983. The company also builds chimneys and other energy-efficient construction projects.

The No. 7 tower, being built by Yineng's workers, would have been the largest hyperbolic cooling tower in Jiangxi when construction finished next summer. It was a little less than halfway finished before the accident.

It was these workers who fell to their deaths when the platform collapsed.

According to witnesses interviewed by Caixin, at around 7:30 a.m., the top layer of concrete on the tower collapsed, pulling with it the attached steel piping and the crane holding up the platform on which the carpenters were working.

The 74 workers were killed instantly.

"It all happened so fast," said another construction worker from Anhui who watched the incident unfold from a nearby building. "In less than a minute, it had all fallen."

The dead included 10 from Baifantuan village in central China's Hebei province. All of them had the surname Bai, and they had been recruited by Bai Shuping, a service manager at Yineng. Every year, he brought workers from his hometown. This year, this included his younger brother and two nephews.

Rushed construction and mismanagement played a role in the accident, according to preliminary findings by the State Council's special investigation team that rushed to the site. Several construction workers at the site also complained that they were ordered to take dangerous shortcuts to complete the work quickly. They told Caixin they believed the concrete hadn't had enough time to solidify when the carpenters went in to remove the mold from the previous level laid, and that this caused the collapse.

Yineng was under heavy pressure to expedite the project. At a meeting on Sept. 13, the project manager from the major contractor, Zhongnan, pushed for speeding up construction. He said subcontractors should increase the number of workers and equipment to hasten work during the final sunny days in fall and early winter. At the same meeting, Yineng committed to a "big push for 100 days."

A construction worker from Baifantuan who had worked for Yineng from 2006 to 2014 said it was common for investors to give bonuses when projects moved quickly. Internally, Yineng also rewarded managers and foremen when they successfully squeezed tight schedules even tighter.

The time frame given by the investor Gan Energy, and contractor Zhongnan was quite tight, according to a representative from another construction company that also bid for the power plant project.

"We lost the bid because we said we can't complete the work within the given deadline," the representative told Caixin. "What would normally take eight months, they wanted done in four."

The former employee from Baifantuan told Caixin that he also believes rushing the construction led to the accident. Concrete can take from four to eight hours to dry or cure depending on the temperature and humidity. It had been raining in the days leading up to the accident, and temperatures had dropped to 4 degrees C. He guessed that the concrete would have taken close to eight hours to dry on that cold, foggy day, but that the mold holding it together was removed only six hours after the concrete was poured, leading to the collapse.

According to Yineng's website, by Nov. 21, 41 of the planned 119 cooling racks in the No. 7 tower had been completed. About nine sections had been completed in that week alone. If the construction time of each section had been cut by two hours, giving the concrete only six hours to dry instead of eight as the same former Yineng employee assumed, the entire project could have been completed 238 hours faster.

Questions have also been raised about the quality of materials used by Yineng. According to the same former employee, when substandard sand is used to mix concrete, it can take more than 20 hours to dry, and even longer to solidify completely.

On Nov.29, six people were arrested in Fengcheng on charges of producing and selling substandard products, according to the official Xinhua News Agency. It is unclear whether this was related to the accident at the power plant. Of the nine executives arrested a day earlier, five were from Yineng and two were from Zhongnan.

Yineng has a checkered track record when it came to following work-site safety rules. A worker was killed after being struck by falling objects two months earlier at another site, a worker on that project told Caixin. But Yineng had "handled the matter internally," the worker said.

Documents obtained by Caixin show that in one accident in May 2011 where one worker died due to a gas leak, Yineng later gave local regulators around 5,000 yuan. When that project was finished, Yineng sent out a news release saying it was completed with no accidents.

Following the accident, Premier Li Keqiang called for regional governments to "strengthen supervision and prevention measures to prevent such serious accidents from happening again." But no specific instructions were provided on how to do so.

Government promises for action following a preventable work-site tragedy now follow a familiar pattern with results of investigations are rarely made public.

On Nov. 27, Yineng announced that the families of victims would each be given 1.2 million yuan in compensation. This is a huge sum for the villagers in Baifantuan. One farmer whose son died said he had only earned 3,000 yuan from this year's corn harvest.

Since the accident, all of Yineng's projects nationwide have been halted, according to an official from the Handan City Administration of Work Safety.