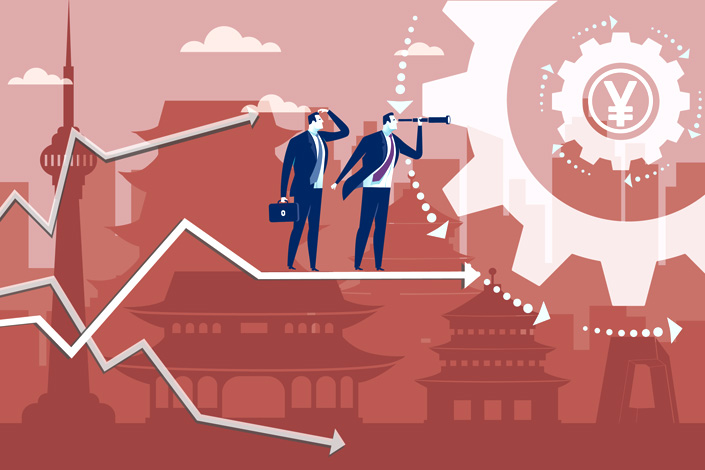 (Beijing) — Chinese leaders at a key economic policy meeting weakened their previous emphasis on targeting growth, suggesting an aggressive stimulus is unlikely as Beijing stresses social stability and reform ahead of a major leadership reshuffle next fall.

The annual meeting Friday, presided over by President Xi Jinping and attended by members of the Communist Party's all-powerful Politburo, adhered to the usual goal of "seeking progress while maintaining stability." But it stopped short of adding the phrase "keeping economic operation in a proper range," as it did last year.

"That indicated the government is unlikely to take aggressive measures to drive growth" now that it is confident in achieving its annual expansion target of at least 6.5% on average for the 2016-20 period, GF Securities economist Guo Lei told Caixin.

"The main task is to restructure the economy, which means stabilizing growth can't be overly stressed because the two issues may conflict," he said.

The meeting is usually held ahead of the Central Economic Work Conference — a closely watched key event usually in mid-December in which senior officials decide how to steer the Chinese economy in the following year.

The Politburo in a statement posted on the central government's website Friday gave unusual prominence to "making breakthroughs in key areas under the prerequisite of ensuring social stability."

China's plan to cut overcapacity in the steel and coal sectors over the next three to five years will cost an estimated 1.8 million people their current jobs, the government has said. Scenarios like that stoke worries about social unrest, which could damage the prospects of local officials who may be in line for promotion in the reshuffle of the Party's elite echelons of power to be determined at its 19th National Congress in the second half of 2017.

"What is clear is that the government has been making the case of 'quality over quantity' and widened the metrics against which progress should be measured — including for provincial-level cadres," he said.

The Chinese economy is still facing difficulties, including rising financial risks in some sectors and trailing development of some regions, according to the statement.

Problems such as overcapacity and credit-fueled investment have made many Chinese provinces vulnerable and will test the government over the next few years, Stevens said.

Brian Jackson, an economist with research firm IHS Markit, said the ability of local governments in poorer regions or of those reliant on revenues from a single, underperforming industry to honor their debt obligations has concerned Beijing.

"If many small governments defaulted or nearly defaulted, it would sharply increase borrowing costs for many others," he said.

Authorities are expected to keep monetary policy prudent next year while leaving fiscal policy loose to spur growth with an aim to curb capital flight out of the country and rein in overly fast-rising home prices in major cities.

"With the (U.S.) Fed expected to raise interest rates in December 2016 and another one to two times next year, domestic monetary easing would exacerbate capital outflow pressure," analysts with China International Capital Corp. (CICC) said in a report on Monday.

Inflation in the country picked up recently, also making rate cuts unnecessary, they said. The producer price index, which measures prices at factory gates, rose 3.3% in November — the strongest reading in more than five years — after just returning to positive territory in September following 42 straight months of declines.

"Monetary policy will place more emphasis on the control of asset bubbles and financial risks," the CICC economists said.

The Politburo meeting also promised to build an "effective long-term mechanism for the stable and healthy development of the property market that complies with the country's situation and market rules."

That is widely interpreted as a sign the government will speed up the study of a long-awaited national rollout of a property tax and arrangements for the aftermath of the expiration of the 70-year use rights for residential construction land.

"We expect national property tax rules will be announced in the second half of 2017, but not begin implementation until 2018 or possibly somewhat later," Jackson said.

He speculated the 70-year lease system could be merged with the tax system, with possible solutions including the lease to be extended automatically on payment of an annual tax.

As for the "One Belt One Road" program the Xi administration has been keenly promoting, Stevens believed infrastructure construction, such as railways, ports and roads, will continue to play a leading role.

"It aids the old part of China's economy to export some capacity and flex the competitive advantages its state-owned enterprises have built up inside China," he said.