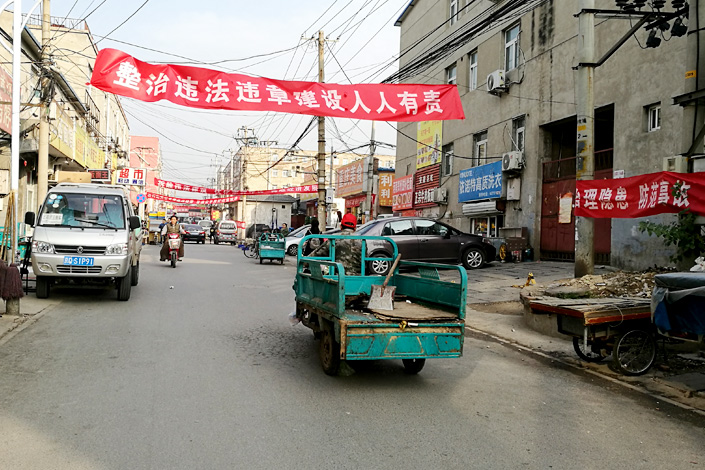 (Beijing) — Li Yi, a young computer engineer working in Beijing, said authorities forced him out of his apartment in a village in Haidian district in November, days after his power supply was cut off even though he had paid the bills.

Li (not his real name) is among hundreds of thousands of migrant workers in the Chinese capital who are struggling to find an affordable place to live amid rising property prices and an ongoing effort to curb the population that includes reducing the number of migrants from other cities.

Li's small apartment was in Yongfengtun village, in Xibeiwang township in Haidian — one of Beijing's most populous districts. For years, farmers have been hastily putting up prefabricated buildings in their farmsteads and renting them to the cities' army of migrant workers without getting the proper government approvals. In a city where the monthly rent of a 10-square-meter room is 2,000 yuan ($290) to 3,500 yuan a month, the farmers offered a cheaper alternative.

Li said his rent was about 700 yuan a month, and this allowed him to use most of his 9,000-yuan salary to support his family in Sichuan province.

But the government plan to rein in the growth of Beijing's population has targeted these low-cost houses. Amid worsening pollution and traffic woes, the municipal government last year said it wants to cap Beijing's population at 23 million by 2020. At the end of 2015, the Chinese capital had 21.7 million residents, including migrant workers who stay in the city for at least six months.

Each of its districts has also set their own targets for curbing population growth. For example, Haidian, where Li is living, wants to reduce its population from 3.71 million in 2015 to 3.13 million by 2020, a 16% cut, according to a government plan released in January.

As a part of this plan, officials in Xibeiwang township were ordered to reduce the number of residents without a Beijing household registration document by 20,000 before Nov. 20, according to a Yongfengtun village committee member who asked not to be named.

A woman who had managed one of the apartment buildings in Yongfengtun for over four years told Caixin that she had never seen such aggressive government measures aimed at "pushing migrants out."

"They came and banged on tenants' doors every day until they agreed to move out, and they cut off their power supply for a week," she said. "Officials also stationed four guards at the front door for a week to intimidate tenants."

The building manager, a migrant worker herself, said she had lost her job last month after her apartment complex was forced to shut down.

But Tian Chengqiang, head of the Communist Party committee at Yongfengtun village, said they were only evacuating tenants from unlicensed buildings before demolishing them.

He said it is part of the government campaign launched last year, which aims to "clean up dirty and unsafe areas" in the city's outskirts.

Since 2014, authorities have pushed out hundreds of wholesale and retail markets in the city center, which employed tens of thousands of migrant workers since 2014, to the fringes of Beijing or areas in the city of Tianjin and Hebei province that border the capital.

But now, city authorities said they want to trim the population in the suburbs that lie on the fringes of Beijing by 500,000 people by the end of 2017.

But the scores of migrants forced out of their apartments in Xibeiwang have chosen to remain in the area, sometimes even renting rooms in local farmhouses, a local resident told Caixin.

Han Fang, a computer programmer from the central Chinese city of Zhengzhou who was forced out of an apartment in Hanjiachuan, another village in the township, said he quickly found another apartment in a neighboring town.

Han said aggressive government moves to curb population growth in the capital and the lack of affordable housing was putting increasing pressure on migrants.

"Who would want to live like us in Beijing if we can have the same opportunities back home as we have in Beijing?" he asked.

Li, the IT engineer from Sichuan, said he was thinking about going back to his family. "But I have to stay in Beijing for a few more years because I have loans to pay," he said.